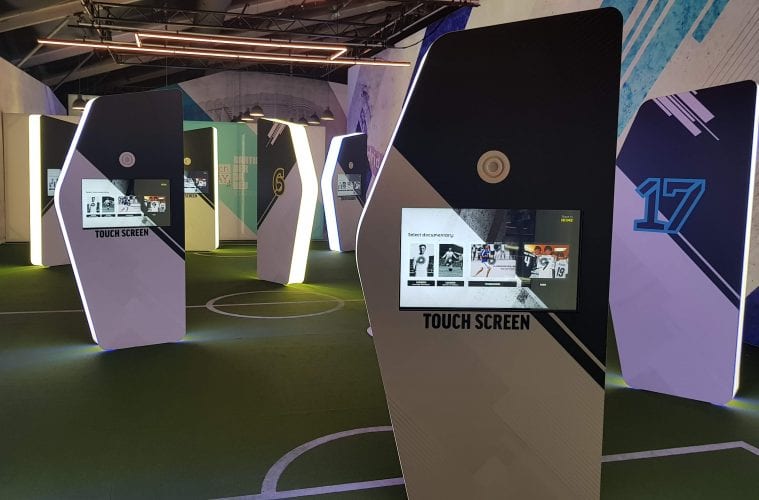 Real Madrid are arguably one of the world’s most famous football teams, and it’s now showcasing the beautiful game in all new ways at the Real Madrid World of Football Experience, a state-of-the-art digital and physical football experience designed for all ages.

The experience is touring around the world and is a blend of physical interactive experiences alongside the latest and greatest in AV displays and gaming technologies. In its four zones, visitors can go behind the scenes to discover the culture, passion, players and epic victories that have made Real Madrid so notorious.

The curtain raiser for the whole experience, an immersive video wall, was created for event managers Interp on BrightSign players by system integrators Amped Digital. Content was created by Tania Price of Immersiv. BrightSign players also drive interactive information kiosks throughout the experience. Starting in Melbourne, the experience is travelling around the world during the next five years visiting 15 cities and connecting with the club’s fan base, estimated at 140 million worldwide.

As visitors enter the 50m x 30m touring pavilion created by Interp, they are welcomed by two 18-screen video walls powered by BrightSign players programmed by Amped, associated with a wall of sound. Creating video walls on this scale is a challenge in itself – but most walls of this size are built just once. The World of Football Experience will be dismantled and reassembled at least 15 times around the world without the original designers being present. The video wall has to work flawlessly out of its packing cases each time.

Matt Steedman, director of Amped Digital noted, “We created an AV explosion: a spectacular immersive audio video experience that gets visitors excited and sets the expectation for what’s to follow. Even for an AV-pro like myself, the final effect is dizzying: a combination of 36 large screens delivering content in perfect synchronisation all accompanied by a wall of sound makes a deep impression.”

The entrance consists of two video walls each with eighteen 49in HD panels. Dylan Daniel Holtzhausen, operations manager of Amped Digital, continued, “Real Madrid’s players are famous for their passing, which involves flawless timing. Creating the video wall at the entrance to World of Football required even greater timing precision – you can think of it as video being passed with complete accuracy around the 12 BrightSign players. We used BrightSign players for this project because of the ease and exactitude with which they can be synchronised as well as for their durability and reliability. We don’t believe we could have achieved this performance using anything else.

“The visitor’s field of view encompasses several screens, so synchronisation has to be frame-accurate across each display in both walls. A discrepancy of a single frame or even half a frame would ruin the effect. Amped used 12 XT243 players for the wall, each driving two or four screens. They are all networked together, and one is designated the master. All the players take their timing from this master, starting the playback of each of the eight video segments at precisely the same moment.”

Amped carefully colour coded and labelled the cables to simplify reinstallation as the World of Football travels around the world. To minimise the cabling required, Amped powered the players from the network switch using Power over Ethernet.

A further eight BrightSign XD1033 players were used to implement eight 40in HD interactive information terminals located in the four zones that form the experience. The players are connected to the screens through USB and control navigation and the playback of the selected content. Amped created the entire navigation structure in BrightAuthor.