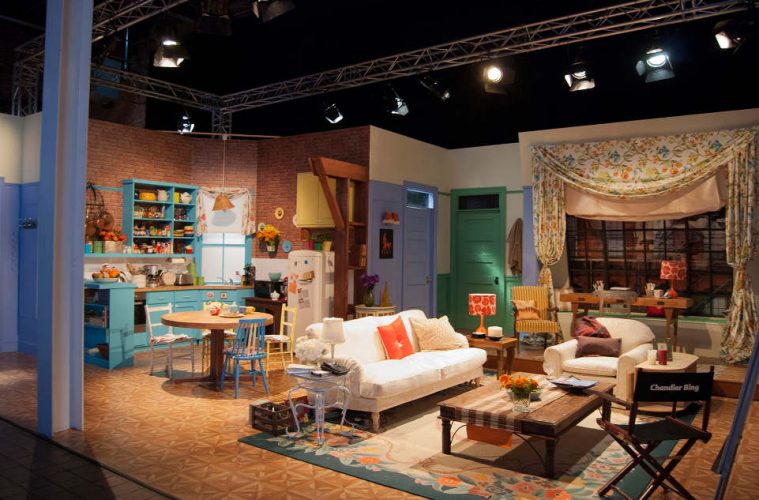 The Boiler House was transformed into a replica set of Monica’s apartment, complete with Central Perk style café and pop-up hair salon where fans could get a Rachael Green blow out plus a plethora of Friends props and memorabilia. Organised by Comedy Central, tickets for the event sold out within minutes of going on sale.

PR Live’s crew worked closely with the builders Scena from Croydon. First, they installed a combination flown/ground supported rigging solution for a television style ‘white light’ rig to be positioned above the apartment which comprised around 40 2K fresnels. This produced good, even crisp and naturalistic illumination across the whole space.

For the press launch event, PR Live provided an additional lighting rig of Source Four Profiles, PARs and Minuettes that was also part flown and part ground supported on a series of tank traps, scaff poles and other customised rigging devices.

The building is listed, so any rigging has to be approached creatively and with great care to ensure it was safe and didn’t compromise the look or structural integrity of the building.

For lighting control a ChamSys MQ100 ran everything. Avolites Art dimmers and various PDs were used to distribute power to the different activity areas including the hair salon, nail parlour, etc.

A distributed d&b sound system, divided into different zones, provided audio throughout the space and was concealed as discreetly as possible. It was a mix of T10s, E3s and E5s chosen for their small size and easy rigging, used for background music and some DJ sets as well as sound effects and public announcements.

A digital version of the original cordless ‘Friends’ phone had effects routed to it from a Sonifex telephone balance unit and a separate sound system in the toilets played out looped clips from the series.

Sound sources from five different media players dotted around the exhibition were routed through the main DiGiCo SD9 control console.

PR Live supplied its new 95, 65 and 55 inch Samsung LED screens, which were fitted into the set and used for playing back classic footage from the series which enjoyed 10 seasons from 1994 – 2004. These clips were stored on BrightSign media servers.

The challenge, explains Justin, was establishing an efficient workflow onsite with the set company so all departments could function and use their time efficiently during the get-in, as well as finding a rigging solution which enabled the lighting fixtures to be rigged exactly in the right angles and positions above the set to light it most effectively.