Inside Polycom’s Workplace Of The Future 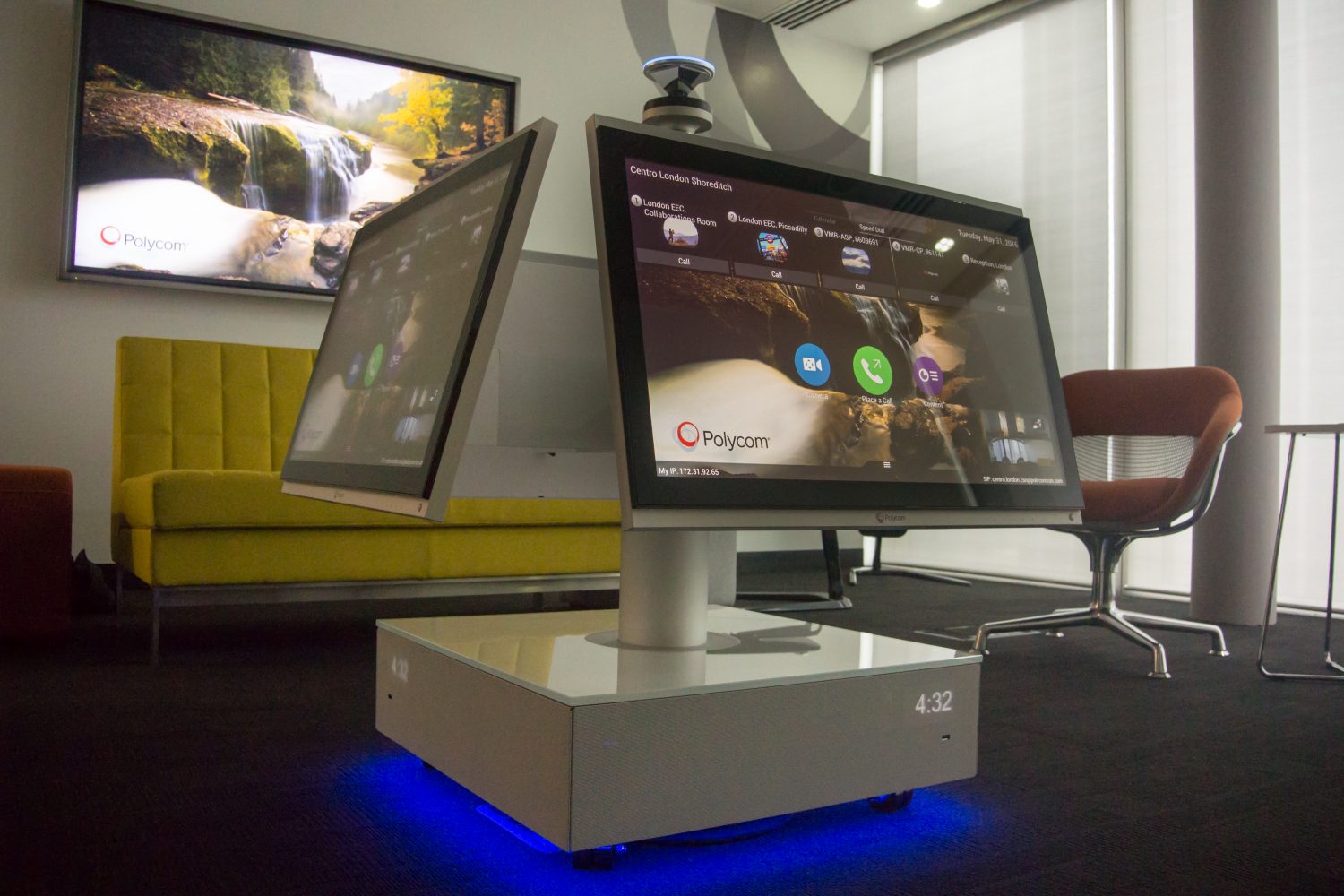 Commercial Integrator Europe took a tour of Polycom’s London office to find out how the company envisions the workplace of the future and to see what solutions it had to offer to enable employers and employees alike to get to that place.

High up in the City of London, Polycom’s office has a solution for every scenario. While many of its solutions aren’t ideal for installers, due to their ease of installation, Polycom says that many of its products offer APIs so that installers can customise the software to fit their customer’s needs. The ease of installation also allows installers to spend more time on more taxing products – such as automation and lighting solutions.

Polycom has been heading the drive towards the workplace of the future and that’s evident in its products. The company says that it has a solution for pretty much every meeting environment – whether it’s someone working from home or remotely using an iPad, iPhone or Android device, a huddle space in the corner of an office, or large immersive meeting rooms.

To get to the workplace of the future however, Polycom realised it needed to overcome some rather large obstacles and thanks to its modern approach to business – it’s something that it has been able to figure out on its own.

At Polycom many of the employees are remotely based. That means whenever employees need to communicate with each other they often use the company’s own technologies to catch up with their colleagues. Even when Polycom employees are in the office, the hot-desking policy means that often staff are finding themselves without a desk unless they’re on an important conference call or desperately need one.

Video Will Be An Important Aspect Of The Workplace Of The Future, But Audio Is King

Polycom prides itself on crystal clear audio quality. In fact, despite humans commonly only being able to hear frequencies up to 20kHz, Polycom’s systems go a step further than the human hearing by offering 22kHz of sound – a number more commonly associated with the music industry.

While it strikes as odd for Polycom to support a frequency above what is perceivable by the human ear, Ray explains that it’s not just about what humans hear, but also about what computers can understand.

One example of this is in manufacturing, where a microphone can be used to pick up the sounds of a machine making noises. A person on the end of the phone can then determine if the machine is making ordinary or abnormal noises, without having to be present in the manufacturing facility. Such high quality audio can also have medical benefits, with doctors being able to diagnose based on often indistinguishable sounds, even if they’re half way across the world.

The high quality information that is being transmitted also enables some pretty important technologies. One such technology is noise cancelling – which Polycom realises is one of the most necessary features to enable the workplace of the future to come to fruition.

Andrew Hug, VP systems engineers, EMEA, notes that given the workplace of the future can quite literally be everywhere, employees won’t always have the luxury of quiet. Whether the person is working at home, where there’s a real possibility of children screaming and dogs barking, or in the back of a noisy taxi – Polycom’s noise cancelling technology should enable work meetings to take place without the interruption of background noise.

There are two ways that the technology works – one is using a digital cone that only works in the immediate vicinity of the active speaker’s head. That means noise outside of that cone is immediately cancelled out and only the active speaker is heard. This scenario is especially useful if the person is typing, which can often be picked up on other PC-based solutions such as Skype.

The other way this noise cancelling technology works is by recognising the difference between a human voice and simple background noise – like crumpling a piece of paper. In the demonstration at the company’s London office, the microphone automatically cut off if it recognised something that shouldn’t be transmitted to others in the conference call.

Audio is at the heart of everything Polycom does – whether it’s the Trio conferencing solution, the Centro or any of the company’s other products, high-quality microphones are always present. It’s not all about the high quality either – with range also playing an important role.

In demonstrating the range, Ray was able to walk outside of the room yet still have the RealPresence Trio pick up his voice clearly. That was achieved without extender mics, with users wanting a little more oomph able to plug additional mics in the bottom of the unit.

Audio May Be King, But Video Is A Vital Dimension

The Workplace of the Future will rely heavily on high-quality audio to enable better communication between employees, but video will be an important aspect.

Both Andrew and Ray believe that video offers another dimension that audio can’t. For example, it’s just as easy to misconstrue someone’s intentions through audio as it is through an email. Ray notes that when you’re able to look at a person you can tell by their body language if the speaker means offence, or if the listener can understand what is being said. It’s here where Polycom sees real value in video conferencing.

If the Workplace of the Future can be anywhere, then communication needs to be as natural as possible. The most natural way of talking to someone is face-to-face, which high-quality video and audio aims to replicate.

In one demonstration, CIE got the chance to check out Polycom’s immersive video conferencing solution –  the kind of set-up one would expect to see inside the White House. It was here that a call was made to Polycom’s Paris office to show off the system’s capabilities.

While an immersive solution won’t be for every office due to its high cost, anyone who gets the chance to try one will understand why it could be. Speaking to the Paris office felt incredibly natural, with the layout of the whole room making it feel like the person CIE was speaking to – who in theory could have been on the other side of the world – was actually in the room.

Ray recounted a story where a visitor to Polycom’s office was visibly shocked when the person on the screen walked off the edge of the screen, as she was expecting someone to still be there. This was the sort of immersive experience that a system like Polycom’s affords.

While Polycom believes that the Workplace of the Future can be anywhere, there’s nothing quite as realistic as its immersive solution. The company still sees a space for it in its vision of the future, after all it’s the best way for companies to communicate with offices across the world as if they were actually there.

Collaboration Is Becoming A Key Part Of Polycom’s Business

Anyone with a Polycom system is already familiar with being able to share content with the person they’re conferencing with – but very soon the power afforded to users will be much greater than it is currently.

CIE discussed the power of modern office tools such as Slack and whether Polycom considers the company a competitor, or whether it would be open to embracing the technology in the future.

Andrew admits that while Slack can be considered a competitor, it’s considered more of an App, like Skype, rather than a full blown conferencing solution competitor. He also admitted that Slack was something the company is watching closely and hinted that in the future there could be some integration made – although no definitive answer was made on this front.

While Slack has enabled offices to be much better at collaborating on projects, Polycom wants to replicate its success and help its users collaborate. One example of this is employees being able to compare different variations of the same document so that everyone on the conference call can pick out what they do and don’t like and change it instantly.

It’s technologies like this that will help Polycom strengthen its grip on the conferencing market –  which is set to boom thanks to the popularity of huddle spaces, despite the decline in traditional meeting rooms.

The Workplace Of The Future

Working from home is an important freedom afforded by Polycom’s solutions and it’s something that doesn’t have to frighten the boss of a company – in fact, Polycom suggests that it should be something that is embraced.

The Workplace of the Future should spell the end to cubicles

Any employer unconvinced by this might be interested to try the Centro, Trio or the Polycom App and see how employees can still work effectively even when they’re not all in one location. Meetings can still be productive thanks to the high-quality audio and video provided by a high-end conferencing solution, such as those offered by Polycom. Employees will also be free from the distractions and delays that typically come with office life.

While Polycom’s solutions can help the Workplace of the Future become a reality, price is likely going to be an issue for some employers. Polycom’s RealPresence Trio for example costs $1,599, while the Centro is significantly more at $69,900. Those wanting a truly immersive experience can expect to pay $475,000 for a 21-seat version of the RealPresence Immersive studio, which to Polycom’s credit is cheaper on a per-seat basis than similar offerings from Cisco.

So does that stop the Workplace of the Future from coming to fruition? Absolutely not. Polycom’s offerings are only part of the overall picture. The company also offers a free iPad App that enables much of the same functionality without some of the high-end technology that comes with dedicated microphones and cameras. For budget conscious companies, there are also other solutions on the market, such as Skype or Slack’s recently revealed video and audio conferencing tools.

The Workplace is the Future is certainly taking shape in 2016, but only time will tell what it will look like – after all, it should theoretically be different for every individual. One thing is for certain however, with modern technology and offerings from the likes of Polycom, employers are no longer forced to tie their employees to a desk – enabling lower overheads on office space, while still maintaining good communication and productivity from staff members.