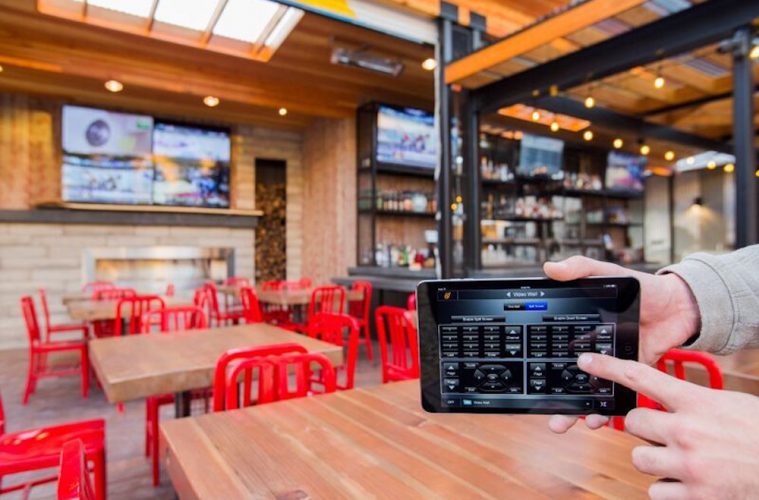 San Diego-based restaurant, The Crack Shack (named after its menu offering of chicken and egg dishes, before you ask) is a new eatery boasting a 4,000sq-f open-air area. Its owners wanted to invest in a high-end entertainment and control system.

However, with no doors, windows or walls surrounding the new open air eatery’s dining area, the restaurateurs needed a way to secure the space when the restaurant was closed.

Having used the company before, restaurant owners contacted local integration firm Paradise InfoTech to provide The Crack Shack with a custom-designed automation system centred around an ELAN Entertainment and Control System.

“We worked with the same management team on a past project at the popular restaurant Juniper & Ivy,” begins owner of Paradise InfoTech, Zack Paradise. “They really liked the technology system that we installed in that space, so they called us again for the new project. We designed a system for the outdoor space centred around an ELAN g1 and gSC10 control system to integrate advanced security, lighting control, audio, a 2×2 video wall and more.”

When designing the system, Paradise InfoTech put security at the forefront. A DSC Neo Security Panel was connected to Luma surveillance cameras and a network video recorder to make monitoring the outdoor space as easy as possible.

“The owners love being able to log into the ELAN App and see how the restaurant is operating, even if they are not there,” says Zack. “They can see what the crowd is like and how many people are at the restaurant.”

Zack notes that he chose the ELAN brand for control due to its intuitiveness and reliability. “With a fast, casual restaurant, not only are they open for long hours and need consistent control, there are also a number of people doing shifts that all need to control the system.”

While managers get some training, often new bar staff or other team members do not get properly trained. “It is important to our clients that the systems be easy enough to use that these people can get up and working almost immediately,” says Zach.

“We also like that ELAN is a full control system where we can integrate all the pieces of the restaurant together. Opening and closing becomes a much simpler task when turning off lights, TVs, music, climate control and arming the system is a one button process.”

When The Crack Shack closes each night, an advanced security system is set to protect the outdoor, open-air venue.

If there is motion detected after the restaurant closes, a notification is sent from the security panel to Zack and his team, then a series of events is triggered within the ELAN system.

First, the security lights are turned on via ELAN lighting control, then audio is played through the speakers warning intruders that the restaurant is a private space and that security has been dispatched.

Next, the system sends an email out to the security company, which can access the video cameras to see if someone is actually on the premises. If it is something that requires action, the company can dispatch personnel to the venue to handle the issue.

Customers can listen to music through two distinct outdoor zones of audio – one in the trellis area and one surrounding the bocce ball courts – connected through a Niles MRA6430 multi-room audio controller. “Using outdoor, weather-proof landscape speakers and subwoofers, we were able to provide a nice full sound in both areas throughout all hours of operation,” says Zack.

“For speakers in protected locations we chose to go with SpeakerCraft AIM272s. These speakers have an amazing smooth sound and the directional abilities allowed us to put the sound right where we needed it. This was especially important in the bar area of the restaurant where we wanted to give the patrons plenty of high quality sound, while keeping the bar back at a reasonable level. The AIM272s helped us accomplish this goal while providing great sound. For the weathered areas we chose to use the Episode Landscape line.”

Zack has used this product extensively and is extremely comfortable with the sound these speakers put out when paired with a weatherproof subwoofer.

“We have a total of eight 4in LS Series Satellite speakers along with a 10in and 12in subwoofer.”

With these speakers broken into two groups the team is able to tailor the music to the crowd that is gathering in each distinct area of the outdoor space.

“All in all we chose some products that are staples of our line up, as well as some new products to create what we felt was the most cohesive mix of sleek design, reliability and awesome performance.”

Inside the kitchen, staff members have access to their own zone of audio through the ELAN App on an iPad. Keeping spirits high while working in the fast paced kitchen, audio can be heard through SpeakerCraft AIM272 in-ceiling speakers.

What’s more, Paradise InfoTech set up a microphone in the kitchen, so The Crack Shack team members can entertain guests with occasional chicken-themed jokes throughout the day.

“The system is set up through a 4 Bus Behringer mixer in the rack to play it over the Niles MRC-6430 controller,” Zack explains. “When the Sense gooseneck microphone is in use, it plays over the same speakers that are used for the music, so everyone in the restaurant can easily hear the team members joke.”

To further engage patrons, Paradise InfoTech installed a 2×2 videowall by the outdoor bar along with two additional TVs.

“Just Add Power for the videowall was a no brainer,” says Zack. “It gives us the extreme flexibility that the client desired at an amazing price point and excellent reliability. Again, this was integrated into the ELAN control system to provide an easy to navigate and simple interface for the client to work with.”

Zack admits that integrating the videowall into ELAN was a little bit different for the team. “We created custom interfaces within the ELAN platform to make sure the walls could be operated through the system.”

Additionally, the bar backs have the ability to change the TV channels for patrons easily through the ELAN App on iPads, while patrons can hear the audio through SpeakerCraft AIM272 in-ceiling speakers by the bar and in the bathroom area.

“Besides the kitchen, the entire restaurant is outside,” says Zack. “It led to some interesting security questions, which we worked with Citadel Security to come with solutions to. As a team we came up with a DSC security system utilising outdoor motion detectors tuned to cover just the outdoor areas and not bleed over to the pavement that’s just feet away. We then paired these with our security cameras and ELAN integration to provide a system that can alert a private security company and send them current security camera footage. They can then vet that footage and decide if there is a real security issue onsite or if it is a rare false alarm.”

Technically the project challenged Paradise InfoTech in a number of ways. “The restaurant is all outdoor and is directly across the street from some condos. We had to be mindful of that when setting up and locating speakers. We went with a larger number of speakers distributed throughout the space running at a lower level and generally aimed back towards the restaurant to try and combat sound pollution as much as possible. Beyond that it was technically a pretty straightforward project for us, but that’s why you hire an integration firm right?”

And Zack’s favourite part of the install? “The videowall!” he answers immediately.

“I’ve wanted to do a lower cost (compared to Planar or NEC) for a while. This one ended up being very reasonable and the functionality with the JAP engine is off the charts. We can truly do anything we want with the tools they give us. It’s great, I can’t wait to use their product on a larger videowall in the future.”

Despite all of the technology The Crack Shack now offers, ironically, the restaurant’s favourite part is a ‘chicken button’ installed by Zack and his team.

“It’s true,” he laughs. “To call their food runners we installed a big red button that when pressed plays a chicken sound over the distributed audio. It is the simple things in life that sometimes bring the most joy!  Beyond that, I would say that their favourite part of the install is the simple control of the audio and video as well as the great sound they’re getting out of the system.”