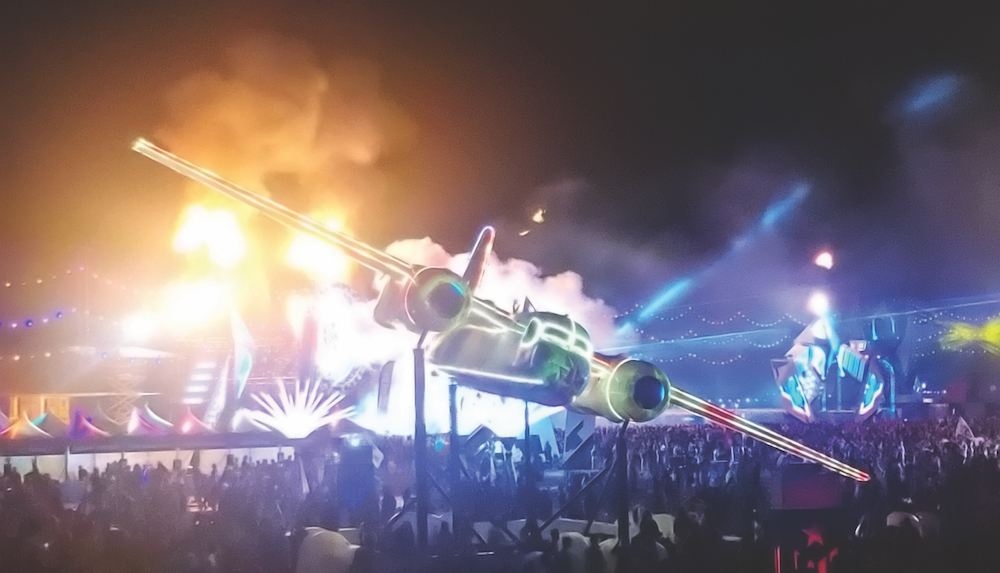 EDM festivals tend to always employ elaborate set pieces, requiring cutting-edge technology to be deployed – and that was no different at Electric Daisy Carnival in Las Vegas.

As one of the world’s largest EDM festivals, Electric Daisy Carnival had to put on a spectacular show to wow the 411,400 people who attended, so the festival’s organisers turned to Tico Sighting to create something visually stunning. The result would be a projection mapped show beamed onto a vintage B-25 Mitchell bomber from the 1940s.

Integrators Virginia Barach and Tico Acosta from Tico Sighting wanted to use a vintage 1940s B-25 Mitchell bomber plane in their design and showcase it descending from the clouds. On its descent, and all to the beat of festival music, the visual display would tell the story of the ghost plane and its pilot.

The ‘ghost plane’ required a powerful projector to bring the story to life, however.That’s why the company opted for Optoma. Using disks of plexiglass with projection film in each of the plane’s engines, Optoma ProScene ZU1050 and ZU850 laser projectors beamed an image to simulate working propellers. Using the same approach, Tico Sighting installed additional Optoma laser projectors on projection platforms, this time projecting against the plane’s body and surface as their inventive backdrop and screen.

“The projectors have an unbelievable range in lens shift, allowing us to reach unconventional areas on the plane’s surface without major placement modifications to the projectors and projection towers. The ability to turn the projectors off and restart them, without the usual long cool down time, was extremely useful. It made switching out lenses and making tweaks to the performance fast and efficient.”

The creative combination of stimulating simulation video content, projection mapping and ultra-bright laser projection resulted in a life-sized illusion of a plane that was operating and in motion, turning the vintage war plane into a living work of art.

“There was a lot of ambient light around us due to the bright stages and other art installations, but we were really pleased with the way the 10K and 8K laser projectors performed. With some tweaking on the first night of the show, we really got the colours to show through richly.”

“Tico Sighting has been using Optoma projectors exclusively for the past two years in our 360-degree immersive dome theatres,” Tico concludes.

“Optoma’s laser and short throw projectors are really bright, easy to install and work well with our auto calibration software. After experiencing the Optoma ProScene laser series we are excited to incorporate them, as well as the Optoma dome lens, into our theatres.”