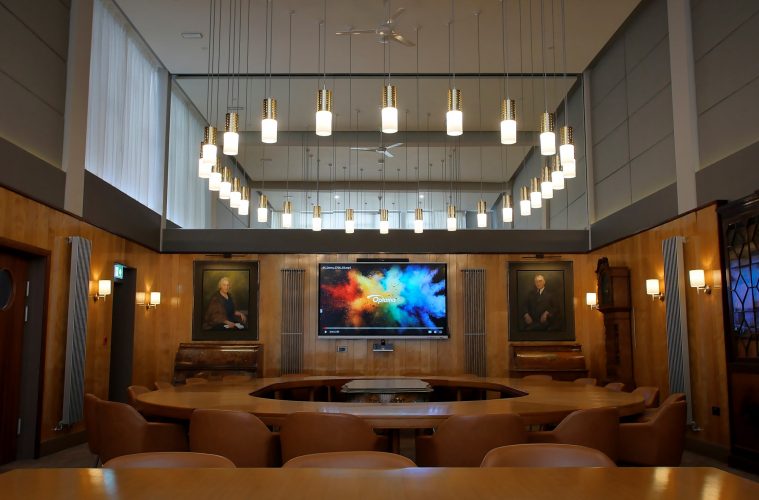 When the James Pantyfedwen Foundation wanted to update and future-proof its grand 1960s boardroom, they turned to audio-visual specialists, Spartan Audio Visual, who selected Optoma as the solution.

The James Pantyfedwen Foundation in Aberystwyth, Wales, was set up in 1998 as a successor to two other foundations. Its purpose is to give out grants to benefit the people of Wales, specifically postgraduate students and cultural places such as churches.

Gwenan Creunant, Executive Secretary at The James Pantyfedwen Foundation, says of the building itself, “The building itself came into being in the 1960s when the benefactor, Sir David James, decided to move the headquarters of the two foundations at that time from London to his home country of Ceredigion.”

Located on the first floor, the huge boardroom’s aesthetic echoes the feeling of the era it was created. Keeping this feeling was an integral highlight of the brief.

Architectural Designer, Stuart Ball, has been working with the foundation for three years. He explains, “It’s always been a boardroom, ever since the building was built in 1968, unfortunately, it was not fit-for-purpose any longer.

“In terms of the technology, we advised Dave Morgan at Spartan Audio Visual that we were looking for a system that would be flexible and scalable for the future.

“One of the things that was never entirely clear was what the final use might be of this room, so we needed a system that would be adaptable.”

To meet all the levels of functionality required and to suit the grand boardroom, two Optoma Creative Touch 5 series 86in displays were selected.

The 5 series is the premium option in the range of Creative Touch interactive flat panel displays (IFP for short). Available in 65in, 75in and 86in sizes, all displays feature anti-glare glass, a blue light filter and a wide viewing angle for delivering crisp and vivid visuals to every seat in the room.

Dave Morgan, sales and installation director at Spartan Audio Visual says “I think the IFP are almost a no-brain option in a meeting room like this.

“The cost-effective nature of the product means you get a lot of the interactive features without spending any more money than you would on an LED display – that helps with a project like this where there isn’t a defined singular purpose for the space, and leaves things open for the users to get what they need out of a space and out of a product.”

Stuart told us his thoughts on the final result, “We’re very pleased with it. What we’ve tried to do is to maintain the character of a 1960s building but to give it a real lift and to give it a real wow factor.”

Dave adds, “We’ve got an excellent relationship with Optoma and find them straightforward to work with.

“It was obvious from speaking to Optoma that there were many things that these displays would do that maybe we hadn’t even have considered.”

Finally, Gwenan, the lady we were all out to impress, told us, “It still keeps the feeling of the 60s from when it was built, but now it is a comfortable and warm room with all of the audio-visual facilities needed for these days

“The hope is from now that it will be available to the public to hire out for meetings or conferences or any other such events. Half of the room perhaps could be used a small theatre style for film evenings.”