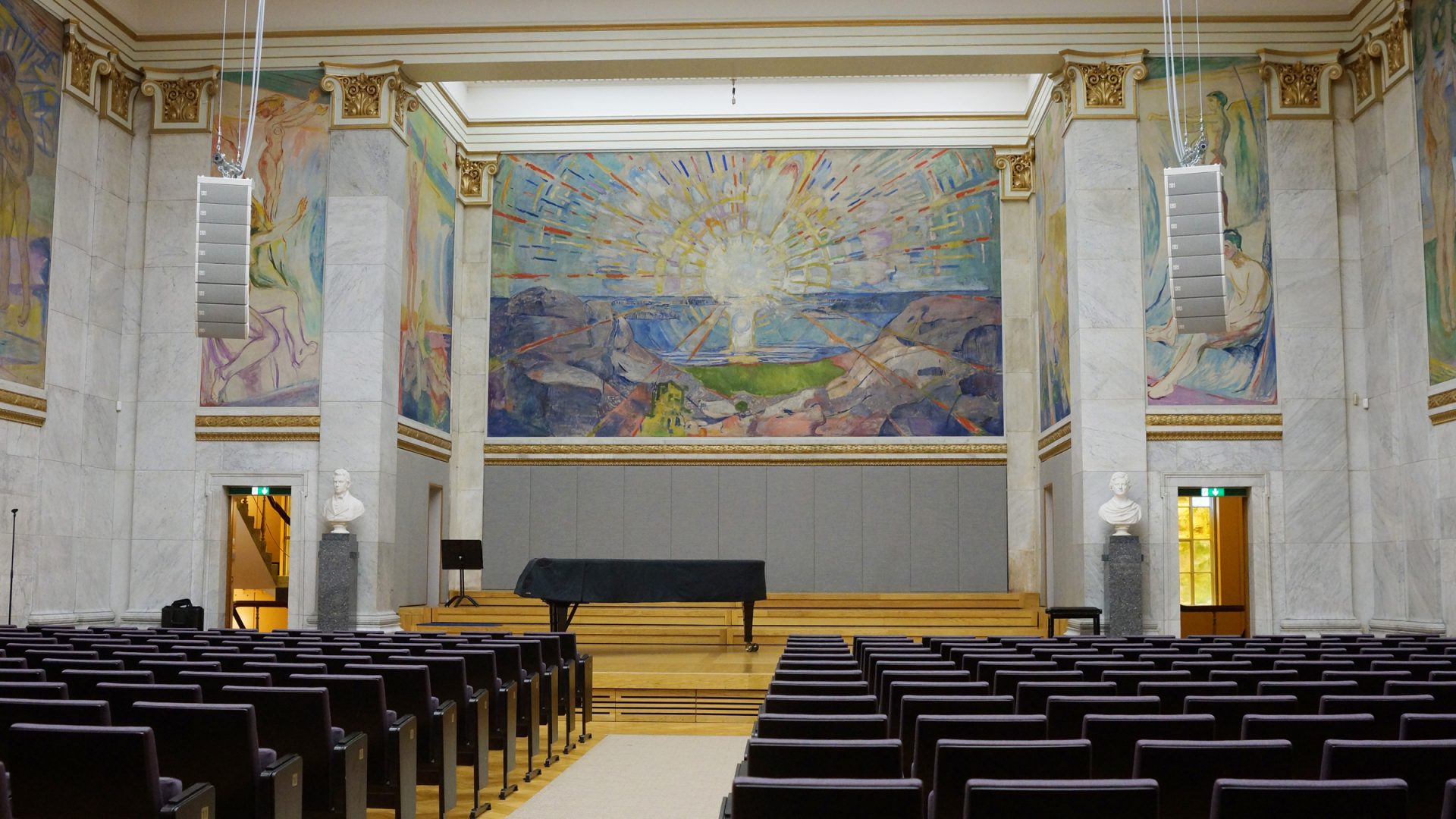 The installation itself is within the Aula, the University’s ceremonial hall, known for holding high profile events such as the Oslo Opera Festival, as well as classical concerts ranging from the Norwegian Radio Orchestra 70th year jubilee concerts to small jazz concerts. In fact from 1947 until 1989 it hosted the Nobel Peace Prize.

Aside from being an extremely acoustically harsh environment, another major factor saw that this project stood out in the mind of Øystein Wierli, head of audio sales at Atendi, Martin Audio’s pan-Scandinavian distributor: There are 11 large Edvard Munch paintings in the Aula. The artist’s most famous piece of work is The Scream, which became a metaphor of man’s existential loneliness and angst.

“In my opinion the most unusual thing in this room is the amount of extremely expensive art,” Øystein tells CIE. “The parts of the wall not covered by the Edvard Munch paintings, as well as part of the celling, is made of marble – the rest of the celling is glass, and the Aula has wood flooring.

“Also, there is a balcony in marble on the opposite side of the room to the stage, above where the mixing console normally is placed. The acoustics in the Aula and especially this balcony are not friendly at all; it’s a highly reverberant room!”

Atendi was invited to bid for the project, with the Martin Audio MLA Mini beating out five other speaker brands. COWI Norway was the specialist consulting company, while Geir Kristoffersen, head of section acoustics, noise, vibrations, electroacoustics, stage and AV, produced system specifications in collaboration with the technical crew at UiO and colleagues at COWI.

“My first idea to solve the problematic room, with its long reverb time, was MLA Mini,” Øystein reflects. “One of the requirements was that the PA system needed to be supplied in white in order to minimise the attention the loudspeaker system normally commands in a setting like this, with consistent coverage throughout the whole venue being a further prerequisite.

During commissioning, a distinct ‘slap-back’ echo could be heard in the front row of seats from the upper balcony at the rear of the hall. By using MLA’s unique ‘Hard Avoid’ feature, it was possible to reduce the energy in that part of the room, losing the distinct echo completely.

The new PA design is based around eight MLA Mini and two MSX subs each side of the stage. Atendi also installed a front fill system consisting of four DD6 speakers, a delay system comprising a further pair of DD6, with two more DD6 as floor wedges. All amps were installed in a single rack in the attic above the Aula.

The new PA rig will now be used on a daily basis, as the Aula conducts guided tours of the venue (the attraction being the Munch paintings). The tour guides will also use the new MLA Mini for speech reinforcement and the venue will also host various concerts, receptions, press and media events using the system.

“The MLA mini is extremely good at steering the sound, so we have a lot less reflection,” says Øystein. “We did apply a ‘hard avoid’ area at the balcony, so we don’t get the reflections from it out in the main room. This helps quite a lot and insures that the STI in the room is even. My personal favourite thing is the fact that we have completed the first install of a white MLA mini system,” he adds. “The extreme even coverage of the room and the rejection of sound on stage from the MLA mini is fantastic.”

The installation was project managed by Atendi’s Lorry Kristiansen and Øystein himself, while Martin Audio’s product support engineer, Robin Dibble supported both the demos last year and the commissioning.