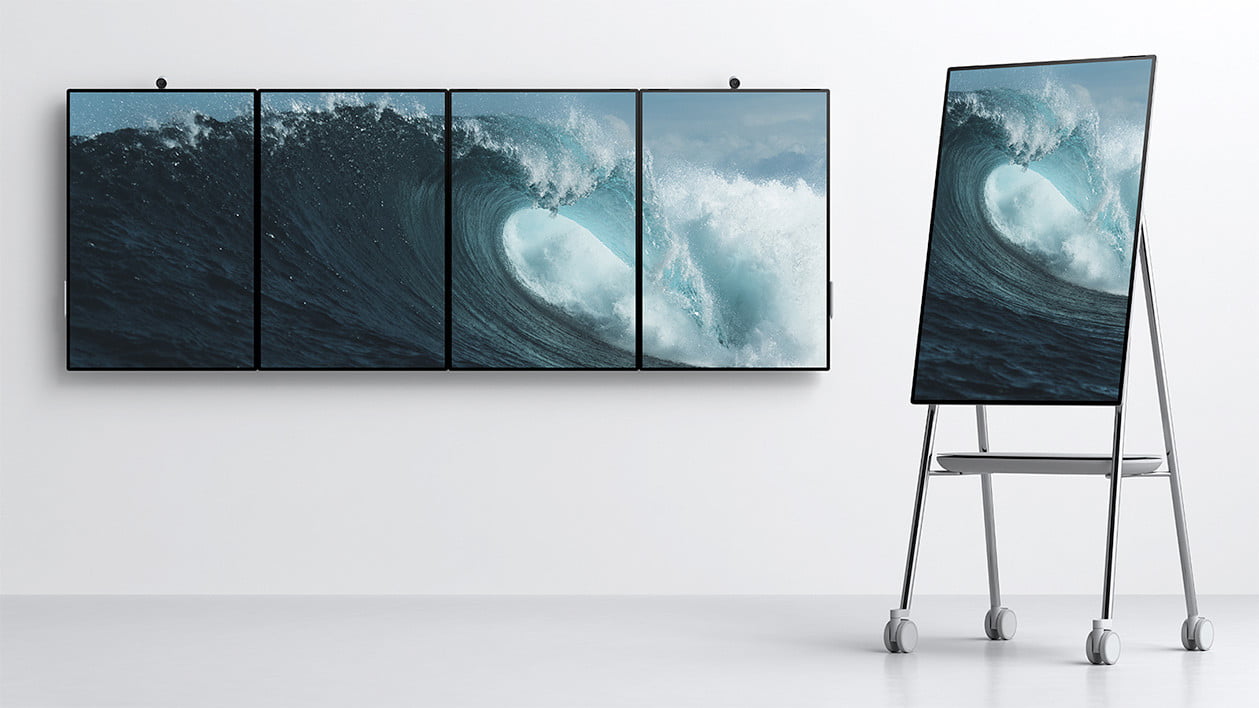 Last year, Microsoft promised a major upgrade to the Surface Hub, complete with a portable design, swivel screen, and the ability to tile several Surface Hubs in a set-up similar to a traditional video wall. Well, the update is finally here, although it lacks many of those features, as Microsoft has confirmed that the second-generation Surface Hub will be launched in two halves, the Surface Hub 2S and 2X.

The Surface Hub 2S is the first of the two devices to be released, and it essentially brings all the new hardware that was promised from the update. That means a new 50in display with a 4:3 aspect ratio and 3,820 x 2,560 resolution, as well as that all-important portable form factor. While the display is smaller than that of the previous generation – 50.5in compared to 55in – the chunky bezels have also disappeared, while the overall dimensions of the Surface Hub 2S have shrunk; it’s 60% thinner and 40% lighter than its predecessor.

It’s always been possible to move the original Surface Hub from room-to-room, but it’s always required a power outlet when in use. That’s no longer a limitation with the Surface Hub 2S, as users can acquire a battery pack to ensure full portability. The battery is rated to last for two hours, which should be long enough for most meetings.

The portable form factor of the Surface Hub 2S does come at an inflated cost, however. While the display will remain roughly the same price, $8,999 for the 50in model, to take full advantage of the Surface Hub 2S’ capabilities, users will need to also grab the Steelcase Roam stand and the optional battery pack. The total cost of the Surface Hub 2S with the included extras should be around $12,000 at launch, hardly a small price to pay; especially considering the comparable Samsung Flip can be bought for a smidge over £2,000, and that even offers the rotation feature the Surface Hub 2S lacks.

The reason behind Microsoft’s two-pronged approach to the Surface Hub 2 is the fact that the updated software isn’t yet ready for prime time. It’s that software that promises features such as the ability to rotate the orientation of the screen or tiling the wall with multiple Surface Hub 2s. Microsoft has promised that an updated version of Windows 10 is coming, although it sounds like it will require a bit more processing power than what is offered by both the 2S and original Surface Hub.

In addition to a cartridge-based upgrade system, Microsoft has packed the Surface Hub 2S with an array of ports. That includes a single USB-A port, a USB-C/DP port, Gigabit Ethernet, HDMI, Mini-Display Port and four USB-C ports. Those USB-C inputs will be important, as Microsoft has positioned them on all four sides of the Hub 2S, which means users will be able to plug a camera into the port that makes most sense based on the orientation of the device.

Microsoft has confirmed that the Surface Hub 2S will see an initial launch in the US in June, with pricing starting at $8,999. For that price, users get a 50.5in Surface Hub 2S, Surface Hub 2 Pen (which is similar to the other pens available in the Surface line-up, and a Surface Hub 2 camera (a 4K webcam with a 90° field of view). Those wishing to add the optional roam stand and battery will have to stump up $12,000.

Microsoft isn’t the only firm offering collaborative displays for corporate use, with both Samsung and Google promising compelling alternatives. The Google Jamboard was the first major competitor to the original Surface Hub, and is starting to show its age. The 55in 4K display was initially launched in May 2017 for just £3,999, and that price included two styluses, an eraser, and a wall mount. An optional rolling stand is available for the Jamboard for an additional £1,199, but it will always require a power outlet.

The Samsung Flip is the newest major competitor to the Surface Hub, having been announced in 2018. The Flip consists of a 55in screen which can be rotated on the fly, and it’s by far the cheapest option available. The Samsung Flip can be purchased for just £2,222, while the stand is an extra £648.