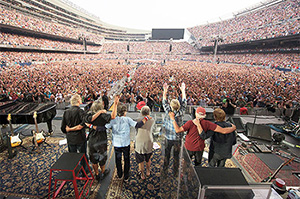 Fifty years after forming their band at a Palo Alto music store, the surviving founders of the Grateful Dead kicked off their end-of-an-era ‘Fare Thee Well’ mini-tour this summer at Levi’s Stadium in Santa Clara, Calif.

The two Silicon Valley shows were a landmark occasion with more than the 60,000 devoted Deadheads in attendance each evening.

It was also a milestone in the band’s decades-long association with Meyer Sound CEO John Meyer, a relationship spawned from a shared passion for audio experimentation and audience experience.

“They are sonic tools for reliably transmitting vibrations that affect neurologic function in a special way we are only beginning to understand, enabling us to explore healing properties embedded in low-frequency sound — a dream come true for us all.”

The Meyer Sound system comprised four front arrays of 17 LEO-M and three MICA line array loudspeakers each, with dual side columns of 14-each 1100-LFC low-frequency control elements and a centre column of 22 700-HP subwoofers in an end-fire pattern.

Filling in the far ends of the stadiums were four delay towers with a total of 56 MILO loudspeakers and eight 700-HP subwoofers.

Following the Levi’s Stadium shows, the Grateful Dead continued its tour at Soldier Field in Chicago over the July 4th weekend, using a nearly identical LEO system for three concerts.

Audio requirements for the shows were handled by Martinez, California-based Pro Media/UltraSound, with system design accomplished by the company’s Derek Featherstone, vice president of touring and rental and the band’s FOH engineer.

“The LEO and 1100-LFC system can handle everything we put into it,” says Derek.

“We are also very impressed with the quality control of the Meyer Sound self-powered equipment. Being able to acquire 650 loudspeakers from several different vendors located in multiple states, assemble the large system on site and have it work seamlessly is no small feat.”

Matt Haasch, audio crew chief for Pro Media/Ultrasound adds: “I was impressed with how well the LEO system handled the physical acoustics of a big stadium.

“Coverage was smooth and practically seamless, with precise imaging for all seating areas.”

John Meyer’s work with the Grateful Dead extends to the mid-1970s when the band’s concerts were heard through McCune Sound Service’s JM-10 systems designed by Meyer.

The relationship continued through the band’s last tour with Jerry Garcia in 1995, supported by Meyer Sound MSL-10 loudspeakers.

Meyer Sound systems have been a staple for tours of reunion and spin-off bands during the interim, including the 2005 and 2009 tours equipped with a Meyer Sound MILO system when the core members were known as The Dead.