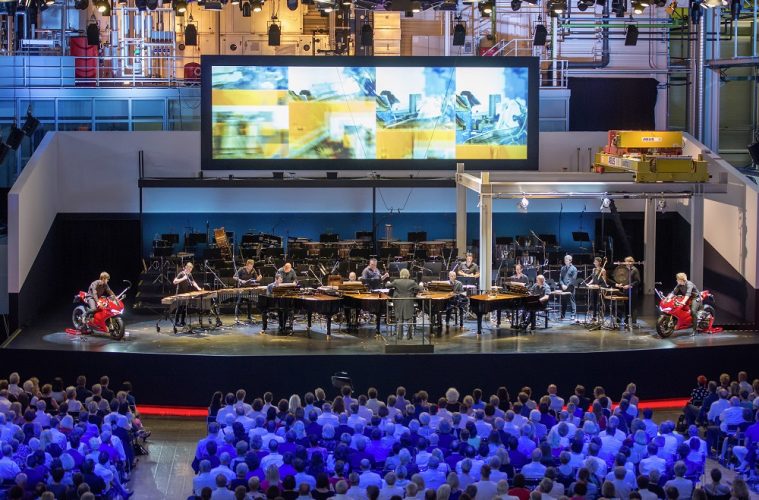 To celebrate the 25th anniversary of Audi’s Summer Concert series, the company enlisted the help of Meyer Sound to fill its factory in Ingolstadt, Germany, with sound.

Using both a Meyer Sound Leopard (read our review here) sound reinforcement and Constellation active acoustic systems, Audi was able to put on a show that enveloped the audience in the music from the musicians it had lined up to perform.

The combination transformed a space that normally stamps out steel side panels for the Audi A3 into a temporary concert hall.

The concert was the first show where Constellation worked hand-in-glove with the new Meyer Sound Leopard line arrays.

While Constellation provided a virtual orchestra shell to envelop musicians with the sonic environment of a concert hall, twin arrays of eight-each Leopard loudspeakers projected the performance to about 1,000 audience members.

“It was truly breathtaking the way the Leopard arrays could accurately recreate the unique, full-bodied sound of the London Symphony,” says Ivo König, IT AUDIO GmbH’s co-managing director, who designed the system with Til Schwartz.

“Leopard’s linearity guarantees a transparent sound image, whether the orchestra is playing loud or soft passages.

“This allows the sound engineer to fully concentrate on the musical score and the dynamics of the performance.”

“I was immediately surprised at how deep the system sounded and how much headroom there was,” he notes.

“It really made mixing fun.”

The Leopard system also included eight 900-LFC low-frequency control elements, with one element flown at the top of each array and two end-fire directional arrays of three elements each under the stage.

The Constellation electronic shell was driven by a D-Mitri digital audio platform and delivered through 15 UPA-1P, five UPM-1P and 16 M1D line array loudspeakers.

To provide the foundational acoustics for Constellation, Ivo and Til prescribed passive acoustical treatments to control the room’s excessive low-mid reverberation.

“Using Constellation in a difficult acoustical space, I’m always amazed at the way I can close my eyes, clap my hands and feel like I’m actually standing in a concert hall,” Ivo says.

“Maestro Nagano is very pleased and the orchestra can thank Constellation for being able to play so effortlessly in otherwise unfriendly acoustics.”

Principal supplier of the audio and video systems for the event was Creative Technology of Stuttgart, Germany, and the entire event was directed by NIYU Media Projects.

This event was the first Audi Summer Concert to be hosted inside factory walls.