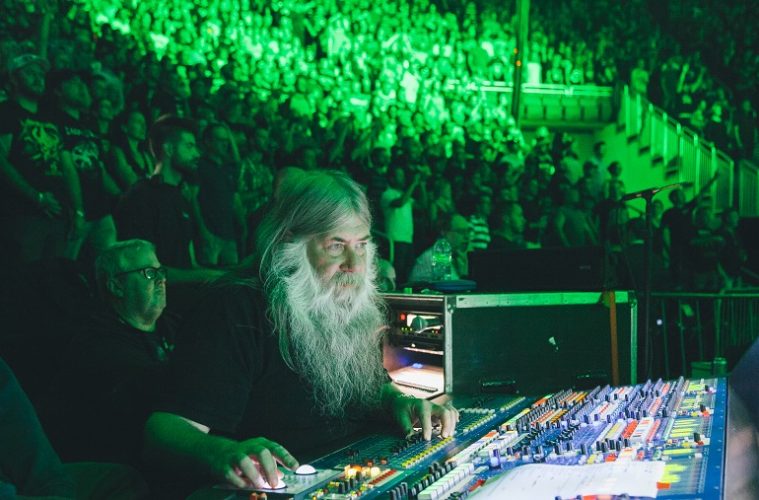 Metallica became the last band to ever play at the Colisée Pepsi, a 56 year old arena in Quebec City, Canada. Just days after the venue’s closing, Metallica also became the first band to play at Canada’s latest arena, the Videotron Centre.

Videotron Centre opened with a game of junior league hockey on September 12, but on September 16 it played host to its first live concert. Since then the arena has played host to Madonna on her Rebel Heart Tour, Shania Twain and Motley Crue. In the New Year Justin Bieber, Rihanna and Celine Dion will all headline a show at Canada’s sixth largest indoor arena.

It was the first time the band had utilised the system and ‘Big Mick’ had some initial thoughts about it:

“Never before have I heard that amount of low-end – with such tightness – when we played in the round,” reports Mick.  “The TM Array works fantastically well. The 1100-LFCs just have an ungodly amount of power.

“Working in the round, you have to get a grip on what you’re doing – fortunately, LEO is very controlled at all frequencies.

“You’re in the near field of one part of the PA, but you can have problems with room ambience generated by all the other array elements going off in other directions.

“LEO makes it completely manageable. With its phase coherence, you get much better penetration into the room and you don’t get low-mid frequencies spreading out to the back and sides.

“And because LEO is so well focused, there’s more energy going where you want it, which also makes it better for the band on stage.”

Metallica tours with its own stage monitoring system, which typically includes as many as 36 Meyer Sound MJF-210 stage monitors.

“The coverage was amazingly even, due in large part to the way LEO and LYON match up in terms of their patterns,” says Lee Moro, senior project director at Solotech.

“And the power lets you hit the spot with all the level you need. The punch and clarity were all there.”

Mick mixed the shows on a Midas XL8 digital console, giving special commendation to the DPA d:vote 4099 microphones on the drums.

Vocal mics were the Shure Super 55 supercardioid dynamic models favored by the band for their vintage look.

Meyer Sound Brings The Force To Star Wars, Inside Out And Jurassic World