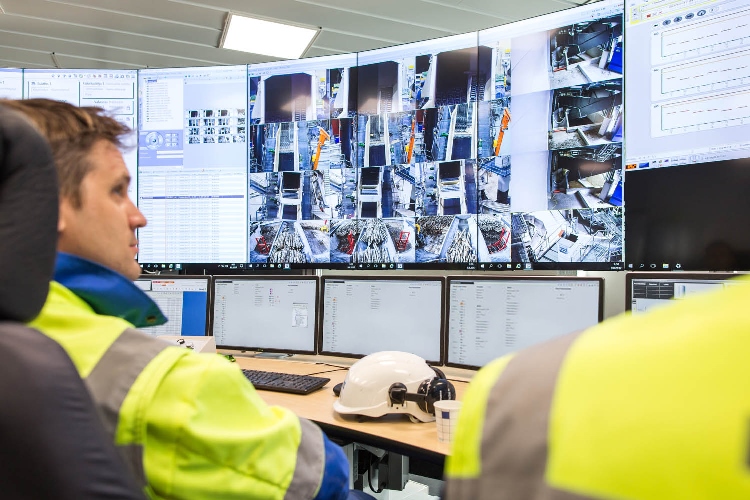 Metsä Fibre is set to be the world’s largest producer and seller of softwood pulp, and in order to reach that goal it needs to ensure that its operation remain efficient by keeping track of everything going on in its state-of-the-art facilities. That’s why the company’s new pulp and paper mill has installed a 12-display, 6.5m wide collaborative wall to monitor process control operations; with the wall powered by Matrox technology.

The new €1.2 billion bioproduct mill in Äänekoski, Finland is key to the company achieving its goal of becoming the world’s largest producer and seller of softwood pulp. That’s why the company has invested heavily to make the facility as powerful as possible, with an annual production capacity of 1.3 million tonnes of pulp, along with other bioproducts such as tall oil and turpentine all passing through its walls.

The bioproduct mill makes use of leading-edge automation and digitised monitoring systems for its high-speed production lines for woodcutting, washing, and more. To complement this, Metsä Fibre wanted a state-of-the-art video wall solution for monitoring its production operations. Taking the recommendation of one of its main suppliers, ANDRITZ Oy, Metsä Fibre reached out to local systems integrator, Elkome Systems, to manage the video wall installation.

Having prior knowledge of Matrox products, and convinced by their performance, Elkome Systems collaborated with Matrox Graphics to implement the new video wall solution in the Äänekoski plant. Metsä Fibre strongly believed investing in a large video wall would be an optimal decision. Not only would it allow the individual control room operators to function effectively, but it would also enhance the collaborative efforts of the team by displaying vast amounts of crucial process control information for everyone to visualise at the same time.

In each shift, two operators in the control room continuously monitor three high-speed line operations where wood is cut into smaller pieces. Part of the process control surveillance system has 36 Bosch IP video cameras permanently focused on the log cutting operations. These feed into a Bosch video server onsite. The operators have the ability to switch to any of the inputs from the 36 cameras, which need to be displayed on a video wall. Having a video wall is key to the mill’s operations as it enables process control through continuous monitoring, without which, the production line cannot function.

Data from automated quality inspection systems that check the pulp for the presence of metal, stones, and other foreign materials (for example, bullets stuck to the wood from hunting) are also additional sources of information that Metsä Fibre wanted to include on the video wall.

With all of Metsa Fibre’s capture and display requirements, Elkome Systems decided on a 6.5m long, 12×1 video wall driven with multi-channel capture capabilities.

Housed in a single 4U Advantech video wall controller are three Matrox Mura IPX cards which can each capture up to four 4K inputs and encode/decode multiple 4K streams. The Mura IPX cards capture the outputs of the Bosch video server as well as the automation systems via four and six inputs respectively – all in Full HD (1920 x 1080p60) resolution – so operators can easily pull up monitoring data points on the wall. In the same system are two Matrox C680 graphics cards that power the 12 pivoted displays at 1080p60 where multiple video sources are viewed simultaneously.

Initial set up and other administrative tasks are done entirely with the Matrox MuraControl software. For day-to-day operations, an easy-to-use software – customised by Elkome for Metsä Fibre – that contains readymade setups is used.

A portion of the video wall is also dedicated to displaying the alarm lists from the 24/7 surveillance of the production control systems. Alarms are typically triggered when the received control system values do not fall within the expected value thresholds (for example, the temperature is too low or high). Should the alarm go off, the operators are able to see a complete picture of the issue at hand and promptly take appropriate action, including stopping the process if needed. The surveillance operators are able to share the display in question with other decision makers as well.

The large, modern-day video wall deployed plays an integral part in Metsä Fibre’s Äänekoski plant operations. It allows for 24/7 centralised monitoring of the cutting operations, which renders a safer and more productive environment by enabling operators to take timely, well-informed decisions. A second server is planned to be set up soon for redundancy sake. By using the Matrox-powered video wall, Metsä Fibre has ensured that it is future ready for network-based solutions.

Timo Myllylä, product manager at Elkome Systems says, “Our video wall implementation for Metsä Fibre using Matrox products has been very well received by the client. With the video wall being used around-the-clock, Metsä Fibre is more than pleased with its reliable and sound performance.”