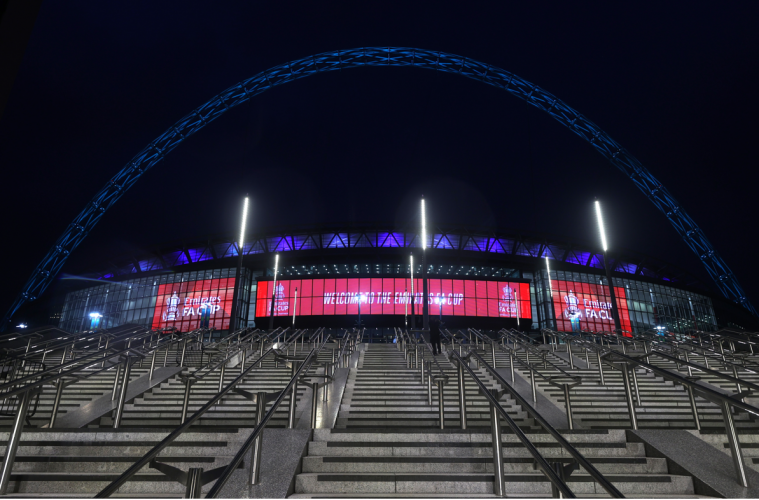 One of the first things that visitors to Wembley Stadium (connected by EE) will see in 2021 are the enormous bespoke LED screens created by LG Electronics (LG) as part of the remodelling of the iconic stadium’s entrance that has seen the old concrete pedestrian flyovers replaced by a new set of Olympic Steps.

A joint project developed in partnership with stadium owner the Football Association, Brent Council, and surrounding landowner and developer Quintain, the most eye-catching aspects of the new design are the giant LED screens that dominate the entrance. Composed of one enormous 460sqm screen mounted on the inside of the Great Hall facing outwards, dubbed the Large External Screen or ‘LES’, and flanked by two 230sqm displays, nicknamed the ‘Ears’, the screens are the most visible part of an enormous project undertaken by FA partner LG that will also see the venue’s 1200 plasma screens all updated to modern LED displays over the coming months.

The 56m by 7.5m LES can be seen as soon as visitors turn onto Olympic Way and is the first large-scale deployment of a newly-developed LG technology, LED Mesh, that allows LED displays to be unobtrusively mounted across windows without dramatically affecting the light levels inside a building. All the electronics required for operation are discreetly mounted at the side of the window, in the case of the LES in 192 daisy-chained LED cabinets, while groups of offset LEDs representing individual pixels are mounted on thin aluminum bars that stretch horizontally from side to side.

While other screens in the stadium are designed to showcase crisp, high-resolution 4K images, the viewing distance of the LES is between approximately 30 to 100m, meaning that a comparatively low resolution of 1432×120 can be used. Together with the ‘Ears’, the three screens are mapped onto a 3840 x 2160 4K video space so they can be driven by the stadium’s existing media server.

Rated at 6000nits, the screens run at 40% brightness during the day and are automatically switched down to 4% for dusk and beyond operation to avoid disturbing the increasing number of local residents living around the stadium.

“Taking the LED Mesh concept from prototype to real-world installation in a few months was a huge challenge for the team, but one which proves the innovation we bring to LED displays of all sizes,” comments Nigel Roberts UK Sales Director, LG. “Giant screens like this are normally installed on the outside of buildings, so to install one internally but facing out while also keeping the window usage intact is a tremendous feat of engineering and ingenuity.”

Working closely with system integrator SSUK LTD, as part of the overall upgrade LG has also installed several other high-profile LED screens around the stadium for crowd messaging and wayfinding purposes. These include the 32 x 2 metre letterbox at the top of the Olympic Steps, which is based on LG’s GSCA series; two 10sqm LBE series screens by the outdoor lift shaft; two 8sqm GSCD screens on the walkway gantry, and two 5sqm GSCD screens on the parapets either side of the new stairs. An 8.5 x 2.1m LAS fine-pitch screen provides high-resolution images at a 1.8mm pixel pitch for the VIP and Royal Box area.

Liam Boylan, Wembley Stadium Director adds: “We are delighted with our new external screens and the wider stadium upgrades we have worked on with LG in recent months. Wembley is an iconic venue, but we recognise the need to constantly innovate to ensure the best possible fan experience. The new screens installed across our footprint will serve to improve our operation and we look forward to fans being able to enjoy them at an event soon.”