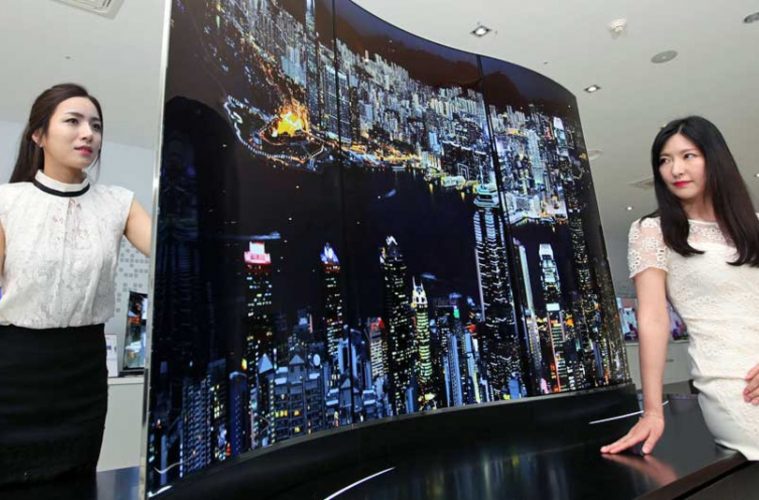 LG has already committed millions of pounds to OLED technology, but the company is not focused solely on residential applications – as proven at IFA 2015.

LG Display, the manufacturer of many of the screens found inside LG TVs amongst other devices, revealed a new concept for OLED which could be ideal for commercial applications.

Revealed by the company’s CEO, Sang-Beom Han, the Vertically Tiling Display is an OLED screen which is double-sided and appears to be foldable.

Some at the show have commented that the display looks almost like a ‘room divider’; which given the huge size at 111in, it is more than possible to use this display to divide a room.

While the commercial applications are plentiful, there doesn’t seem to be much need for a double-sided display on the domestic side of things.

LG Display has not yet decided what to do with this giant display however, as it’s only a proof of concept at the moment.

Speaking about the Vertically Tiling Display, LG Display’s VP of OLED sales/marketing, KJ Kim notes: “We don’t want to limit the display for each industry.

“It can be used as a signage product, a video wall, or a show window. There are many, many areas for application.”

While the 111in size may astonish some, LG says that technically the hardware was the easy part – as it’s just three 65in OLED panels stitched together.

So why has LG Display revealed a double-sided display using OLED technology? It’s quite simple according to KJ – LCD technology is too thick to be used double-sided, but OLED is ideal, thanks to its slender profile.