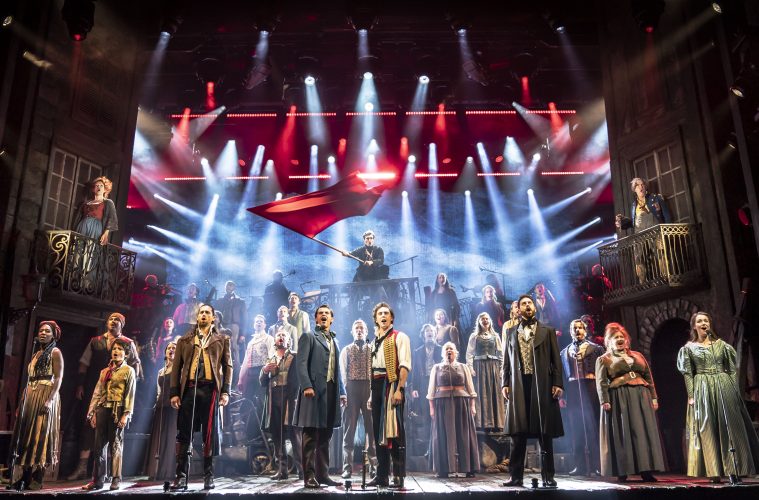 When the newly refurbished Sondheim Theatre reopened its doors in December 2019 to welcome back the West End’s longest-running musical, Les Misérables, the excitement was unfortunately cut short following the swift and unexpected impact of the pandemic.

But hope was once again restored, when a staged concert version of the musical opened at the same theatre – first for only 10 shows in December 2020, and now for a limited season until 5 September. Award-winning video designers Finn Ross of FRAY Studio and Jonathon Lyle were brought on to adapt the original show’s video design to its new concert format through the help of disguise’s pre-visualisation software that is powered by a disguise solo server.

Despite being thwarted twice by COVID-19 restrictions (in the initial opening and then by a UK lockdown ahead of Christmas), the show has enjoyed critical acclaim as theatre-lovers gather every day to “hear the people sing”.

“What we’re doing with video is containing the space and tuning into the emotional temperature of the scene,” explains Finn Ross. “We chose disguise because of the excellent support and the solo specifically for its suitability for smaller theatre shows from a form and cost perspective, while still offering power, flexibility and the full disguise experience.”

The new design is much more simplified in comparison to the musical production as it removes scenography and choreography, while lighting plays a much bigger role, tuning viewers in with the emotions of the performers.

“A subtle hand was taken to create this unique concert experience. The connection with the performer and the stage is very intense, as we tried to find a sensitive way to support the atmosphere and the work of the performer without overwhelming them.”

Unlike the musical which uses projection mapped images that bind to the action and movement on stage, the concert relies on an LED wall to playback subtle elements of the original images, designed by Matt Kinley, inspired by the paintings of Victor Hugo. Ross adds: “we were able to take the original show file in disguise pre-vis and edit it down to condense it to the shorter duration of the concert. Luckily we were operating within the same system and in the same building as the musical, so it was so easy to reconfigure things in the background. disguise certainly made the shift very painless.”

The team was also working with the LED screen brightness extensively, adapting it for very dark or very bright scenes. With disguise at the core of the production, integrating lighting and video, the team was also able to use the software as an LED screen control solution to streamline their workflow.

“We always feel reassured when working with disguise. It’s a reliable piece of software that doesn’t get in your way and lets you create without having to fight with it,” Ross concludes.