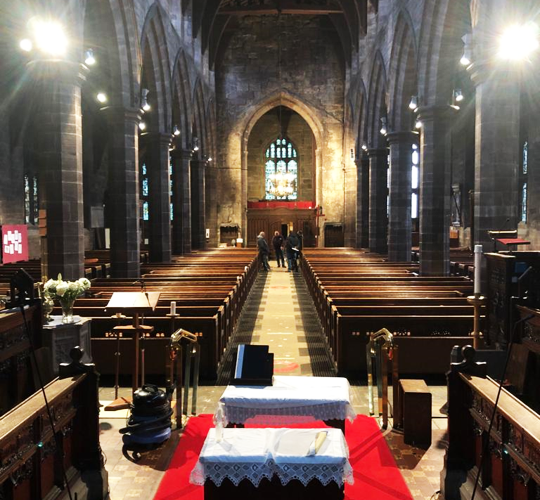 Initially erected in the 15th century, but rebuilt and fully completed in 1873, the Parish Church of St Mary the Virgin is a 710-seater Grade II listed church in Leigh, at the heart of Greater Manchester. Built in the style of Gothic Revival and made mainly from red sandstone, the Leigh-based church felt it was time to undergo a technological facelift and upgrade their dated 20-year-old audio system for when the church would be open again.

Local audio-visual integrator, Blacka Group, an expert in installing sound at places of worship, were contacted by the church to help them install a cutting-edge audio and control system, that would dramatically improve the quality of speech and audio distribution across the entire building.

Acoustically and aesthetically, the building presented many challenges to the company, with the stone surfaces within the building being quite reverberant, meaning the design of the sound system needed to complement this. Aesthetically speaking, the system needed to maintain the churches traditional look and feel, keeping cabling hidden and to a minimum, in addition to implementing products that would suit and blend in with the rest of the building. “The surfaces within St Marys Church are ones we commonly see within churches from this era and because of the size of the building itself, we knew we needed and audio system that would be able manage this space and counter-act its difficulties,” says Craig West, Managing Director of Blacka Group.

The installed solution was mainly built around Symetrix Prism 8 Dante DSP and AUDAC’s brand new column speakers, KYRA, with the Dante element of the DSP providing multiple benefits to the church. In a bid to keep cabling to a minimum, the Dante system allowed for many of the long-distance cabling to be done using CAT, which was very easy to hide and flexible to install. Both the KYRA 12 and KYRA 6 column speakers were utilised in the install, with the 12’s being installed in the main space and left and right pews, whilst the 6’s were installed in the side fills and outer pews. The slim design of the KYRA speakers meant they were perfect to sit and blend in with the building’s pillars, whilst their well-controlled audio dispersion would counteract the buildings reverberant surfaces.

To keep the Dante element of the install consistent, Black Group opted for Powersoft’s Mezzo 322AD and 324AD amplifiers due to their support of the network interface. The amplifiers were installed to provide power to the KYRA speakers, in addition to reducing the cabling between the speakers and the Prism DSP. “The use of Dante across the install proved to be a bit of a life saver, as we were worried about how much cabling we’d need to run around the building given the amount of equipment that was being installed,” said Craig. He continued to say, “We were able to keep a lot of the long-distance cabling to a minimum by using CAT, and this granted us far more flexibility when trying to hide it and maintain the buildings aesthetics.”

Multiple microphone locations were pinpointed prior to the installation of places where individuals would regularly be speaking. The locations which required permanent audio coverage were the pulpit and choir, in addition to a wireless system that could be used when speakers were moving. In the pulpit areas, Clockaudio’s C 33E-RF gooseneck microphones were installed due to their durable and flexible audio pickup.

For the choir, Blacka Group suggested Clockaudio’s C 900 condenser microphones and CA 900-RF microphone shafts as their height and angle could be adjusted to suit the people in the choir. In order to achieve the churches instruction of requiring a wireless microphone system, MIPROs ACT-70HC-UK72 handheld microphone and MU-55HN head worn systems were installed, because of their excellent audio pickup and reliability. All the microphone systems were connected to the Symetrix Prism DSP, which then transferred the audio signals via Dante to the buildings speakers.

For easy control of the basic audio functions and logic events within the building, one of Symetrix’s Arc-2e wall panels were installed. The controller, mounted in a standard single-gang box, has 3 navigation buttons with 1 each for value increment/decrement and a backlit display and acts as a hub for managing the entire buildings audio levels.

An important inclusion in any modern-day audio installation at public places is an assistive listening system. These systems support individuals with hearing-impairment by transmitting audio via Bluetooth direct to their hearing aids. Blacka Group recognised this prior to the install and put forward Opus Technologies LD2.2 induction loop amplifier. One problem which faced Blacka Group throughout the installation, and in particular with the Opus Technologies induction loop, was the placement and concealment of the cables. The Opus system however was up to the task, as their SmartLoop software meant the integrators could plan and design the cable layouts prior to the on-site verification.

The installation has dragged St Marys straight into the 21st century, whilst also maintaining its historical, traditional feel. “The system has integrated perfectly with the aesthetic of the church and will bring it a whole new lease of life. Such a drastic upgrade will not go unnoticed by regular members and the new system will allow St Marys to focus on their services and communions, without worrying about audio quality or control,” concludes Craig.