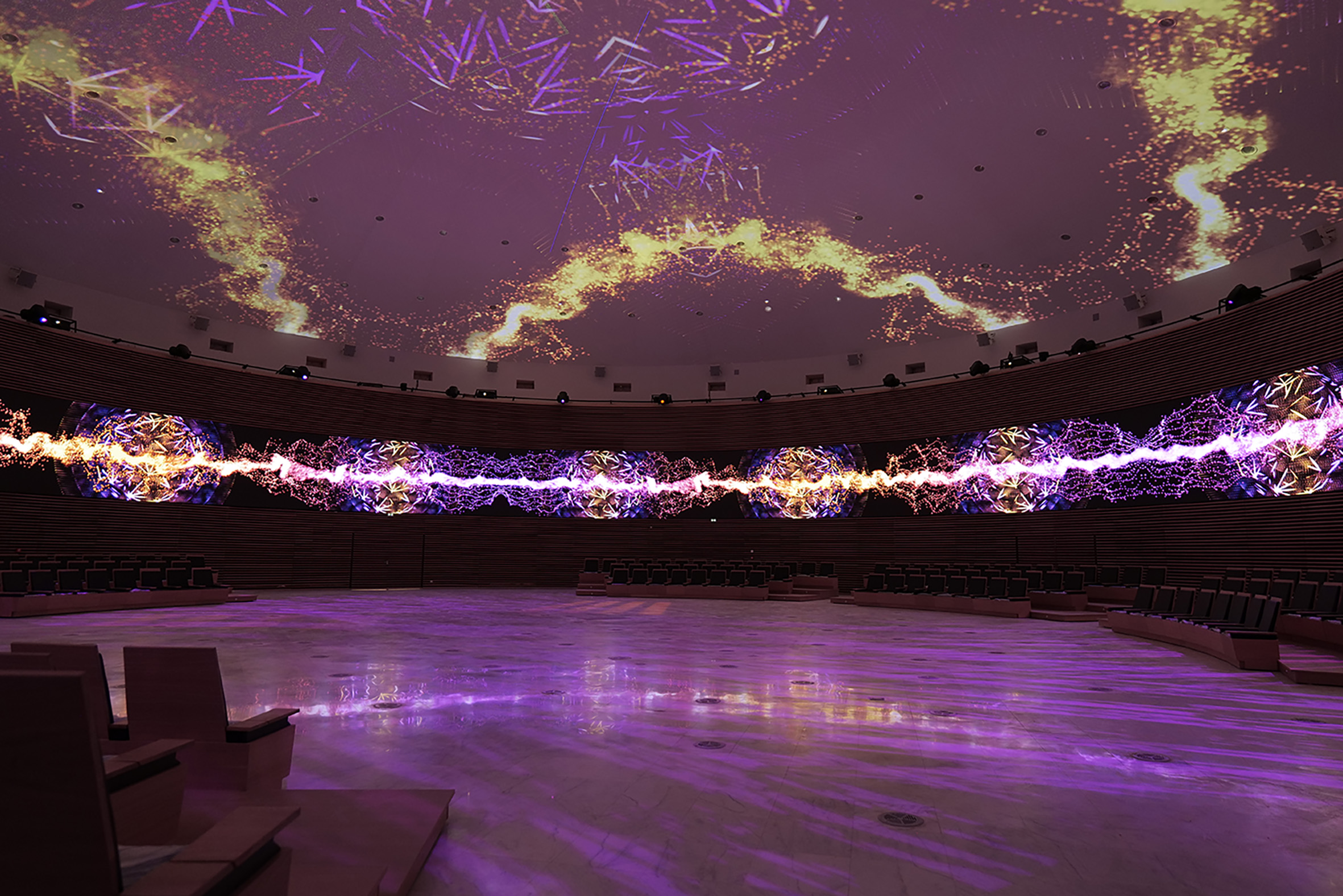 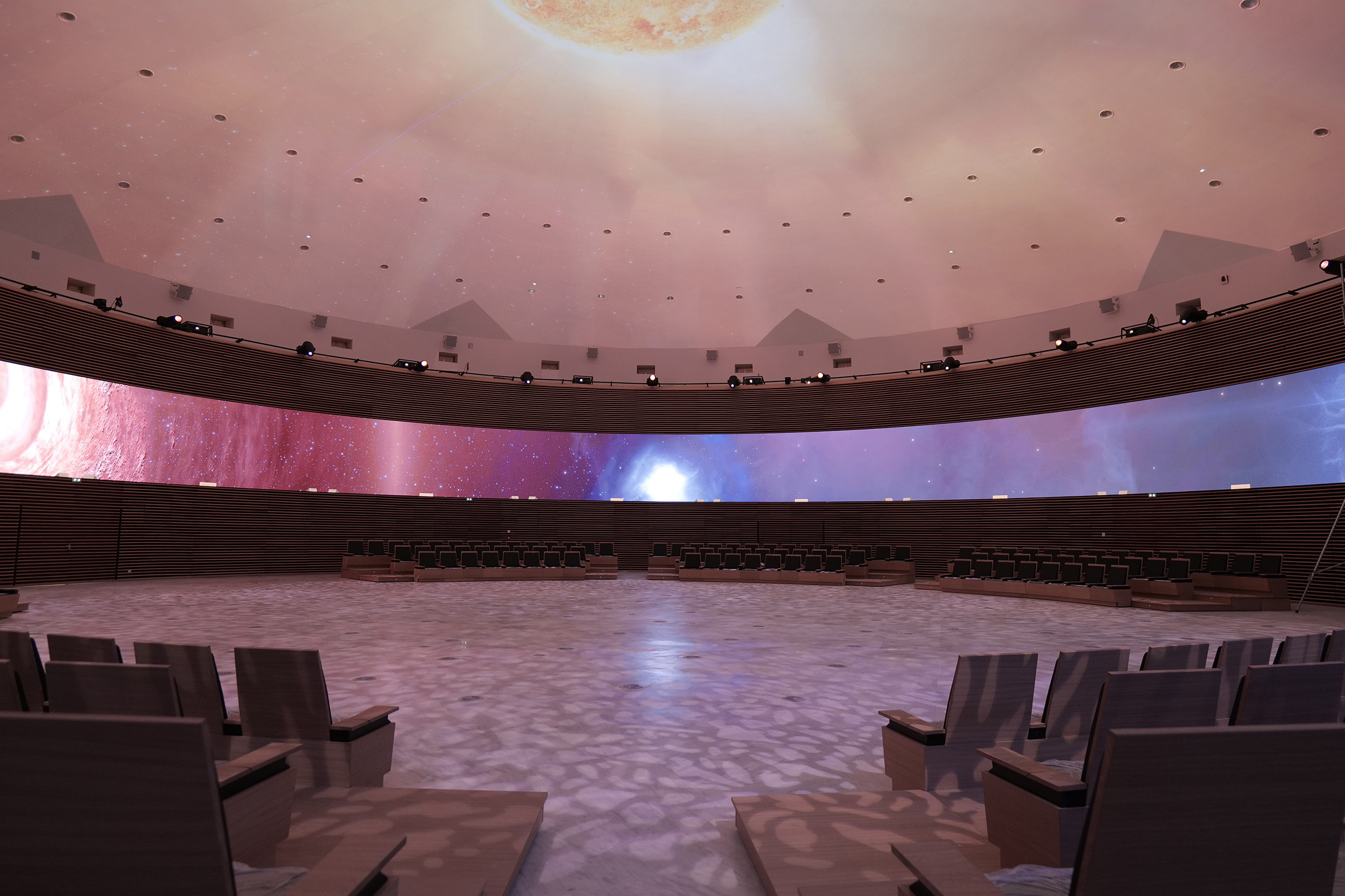 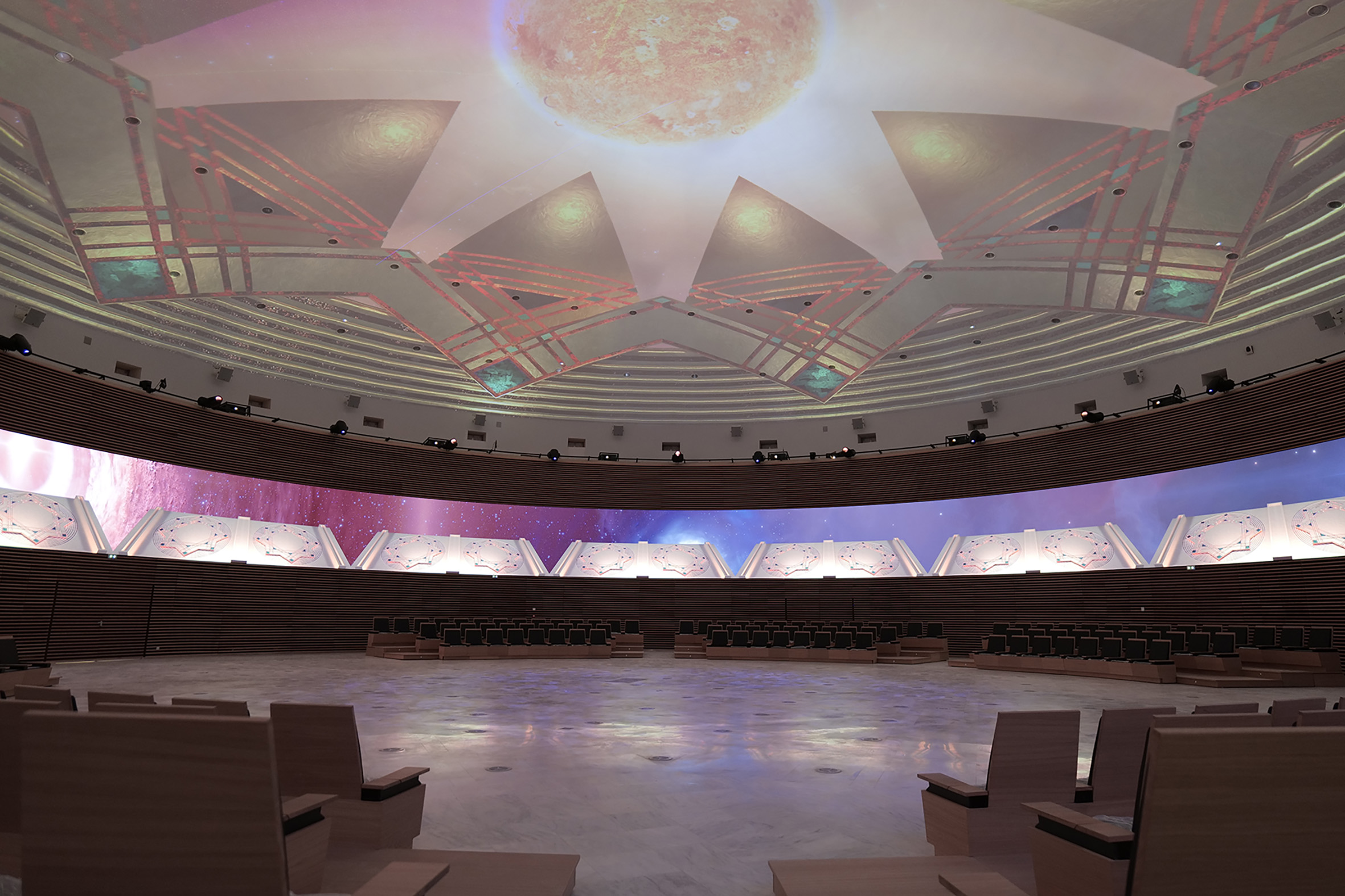 Construction of a custom curved dvLED video wall, the largest immersive video wall in North Africa, has been completed in Morocco, measuring 87.84m by 2.70m with a radius of 313.46 degrees in the auditorium of the future OCP headquarters, within the SRO Administration Building and part of the Mohammed VI Polytechnic University, located in the green city of Benguerier, near Marrakech. Peerless-AV worked closely with three of its partners: Cegelec Maroc for the implementation and full project management, Atrait Consulting for the sizing and sourcing of all the audio-visual equipment, and Samsung France for the supply of LED display panels. Initiated in 2018, the design and installation work took nearly four years. Regardless of the project challenges and complexity, all parties acknowledge this construction as a milestone in the history of Moroccan, and even African architecture.

In 2018, Atrait Consulting, a multi-technical design office based in France and Morocco, was entrusted with the design of the entire audio-visual component of the auditorium of the future OCP headquarters.

“We started from a blank sheet of paper, with the only directive that we had to be able to distinguish ourselves by highlighting the architectural elements and technological capabilities of the future public space,” comments Éric Jondot, Managing Director of Atrait Consulting. The call for tenders won, the first challenge was to take into account the irregularities of the wall to accommodate such a vast curved dvLED screen, measuring 87.84m by 2.70m.

One of the first tasks was to find a partner capable of not only designing a mounting structure to support such a huge project, but that would also bring global expertise. “Four manufacturers applied. But faced with the demands and complications that we anticipated, this partner did not simply have to be a support manufacturer, they had to demonstrate expert LED engineering capabilities that would ensure the adaptability of the mounting structure in the field when the time came to make adjustments and ensure precision alignment of each module. Peerless-AV was the obvious choice.  It should be noted that we were in complete confidence, because we had already collaborated with Peerless-AV in the past. But never for an achievement of such magnitude,” continues Éric.

The challenge was to design the mounting structure from architectural plans, because the auditorium had not yet been built. This structure had to take into account any irregularities in the future construction. The drawings were validated by Atrait consulting and all that remained was to start production at the Peerless-AV manufacturing plant in California.

“The design phase was considered the most crucial. From the very start, the exchanges were fluid and dictated by Peerless-AV’s expertise. We shared the same vision of implementation. Peerless-AV also sent us a video of a mock up installation in their factory to ensure the structure design worked successfully,” says Éric.

Samsung France also noted that a key challenge was in anticipating complications. The curved LED video wall consisted of 183 x 5 (915) Samsung IFH-E LED cabinets in 2.5-pixel pitch, or 87.84m by 2.70m, within a fully floating cylinder measuring 32m in diameter.

“The challenge here is 50% relating to the structure and the other 50% to the expertise of the installer. The study of the structural element had to be extremely thorough, and the handling of the cabinets had to be carried out with anti-static gloves, in a very delicate way,” comments Thomas Kayat, Key Account Manager Display, Samsung Electronics. Samsung carried out vital in-depth research into the project; a task made more complex because at this phase, the building did not exist.

“The requirements covered all aspects. It goes without saying that the LED displays required to dress the auditorium had to be nothing but excellent and meet multiple expectations: image rendering, installation, reliability, long-term servicing, and maintenance of equipment, to name a few. Cegelec Morocco has trust in our products. They are 100% manufactured in our factories, with intuitive components, simplified maintenance from the front, image quality managed by 4K electronics.  It must also be said that the Samsung Electronics brand reassures, by its reputation, the extent of its network, and its 3–5-year warranty, ” adds Thomas.

The design of the mounting structure required close collaboration between Peerless-AV’s dedicated SEAMLESS dvLED Solutions Team and Samsung’s pre-sales team. “Peerless-AV not only had the technical capability and capacity for this specific project but had already carried out many complex dvLED infrastructure deployments around the world via its discreet design and manufacturing resource partner, which the company has now acquired and brought in-house. In addition, Peerless-AV has developed specific, dedicated mounting systems for our LED display ranges. There are few companies on the market that can carry out the design, manufacturing, training and installation assistance,” explains Thomas.

2019 marked the start of implementation. The challenge for Cegelec Morocco was managing the 350 people and around 40 cherry pickers on-site. The Peerless-AV team delivered 19 boxes, including one containing all the equipment and tools necessary for fixing the mount structure. A team of 16 people were able to take advantage of a three-week site stoppage in July. During this time, they worked 12 hours a day, in the middle of summer in temperatures between 35°C and 38°C. “Because of the scale of this facility, we dispatched one of our LED engineers from Chicago to handle the execution. He trained the workers on site and guided them on the installation of the mounting structure through to the installation of the LED panels and the alignment tests,” comments Gwenaelle Villette, Director of Sales France, Peerless-AV.

This expert, on-site engineering support brought significant efficiencies and saved valuable time, every step of the way. At the start of each day, Peerless-AV and Cegelec Morocco led a meeting on the tasks to be carried out and at the end of the day to discuss any problems encountered.

“Bearing in mind that the curved video wall is 313.46 degrees, two groups worked together to construct from the centre to the end points. This approach, advised by Peerless-AV, made it possible to halve the installation time,” Younes Hannache, Project Manager and Business Manager of Cegelec Maroc, a subsidiary of Vinci Energies.

After three days, one third of the LED video wall was completed. There were many technical constraints. One being that the lintels intended to hold the structure were on a discontinuous part of the wall. Aligning the pixels on the LED panels was also a challenge owing to the auditorium’s architecture.

“You had to be able to work around all the complications, as Peerless-AV allowed thanks in part to the presence of its engineer and the high quality design of its mounting structure. We really recognised the extent of Peerless-AV support during installation; the custom, precision components for tight tolerances and the micro adjustment functionality ensured a seamless flat plane was achieved. Otherwise, we would have had to carry out surveys at each stage and the installation would have been much longer, for an average result. Today, everything is perfect,” says Younes.

Peerless-AV used unique and proven techniques to install the frame and the cabinets, in just two weeks. Special global mounting jigs and spacers allowed the install team to scrutinise and perfectly align each of the 184 columns. Allowing each cabinet to be seamlessly applied to the frame, with zero damage to any of the 915 displays.

Thomas Fenton, Senior Business Development Manager – EMEA, Peerless-AV, comments, “Having seen this project on paper, and receiving photos and videos from colleagues over the last four years, it does not prepare you for the sheer scale of this auditorium – until you are standing in the middle, utterly immersed in the whole audio-visual experience. This has to be one of the ultimate showcases for Peerless-AV EMEA, in which we are unbelievably proud to be an integral partner, from start to finish.”

Now complete, everyone involved agrees that the auditorium’s audio-visual design is unique, flawless and exceptional, marking a turning point in Africa. According to Éric Jondot, following this achievement, he has already received several consultations for the conduct of similar projects. This auditorium addresses a requirement to provide a ready-to-use space for both autonomous and customisable presentations.

“At the touch of a button, without the need for a technician, it’s possible to launch a complete audio-visual performance. Or, from the concealed control room, depending on the type of event, the technician can literally unleash all the equipment. We managed to create a totally event-driven infrastructure for four uses: convention, showcase, banquet and immersive. The auditorium’s ceiling comes alive with dazzling projection mapping and the audio system circulates sound all around. In short, the auditorium can be used in the simplest or most captivating way with the projection of an image on the ceiling, taken up on the screen, with an adapted soundtrack,” explains Éric.