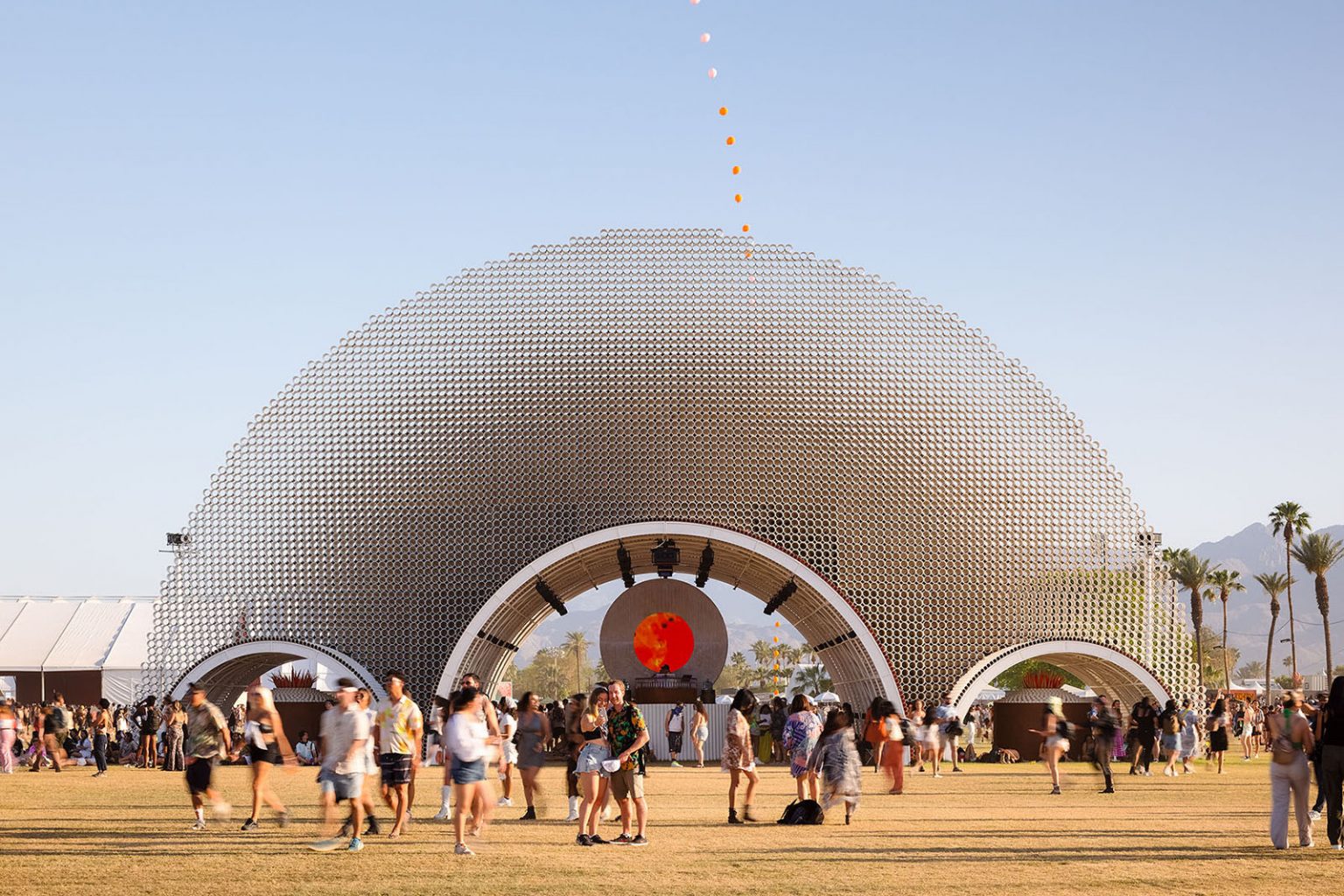 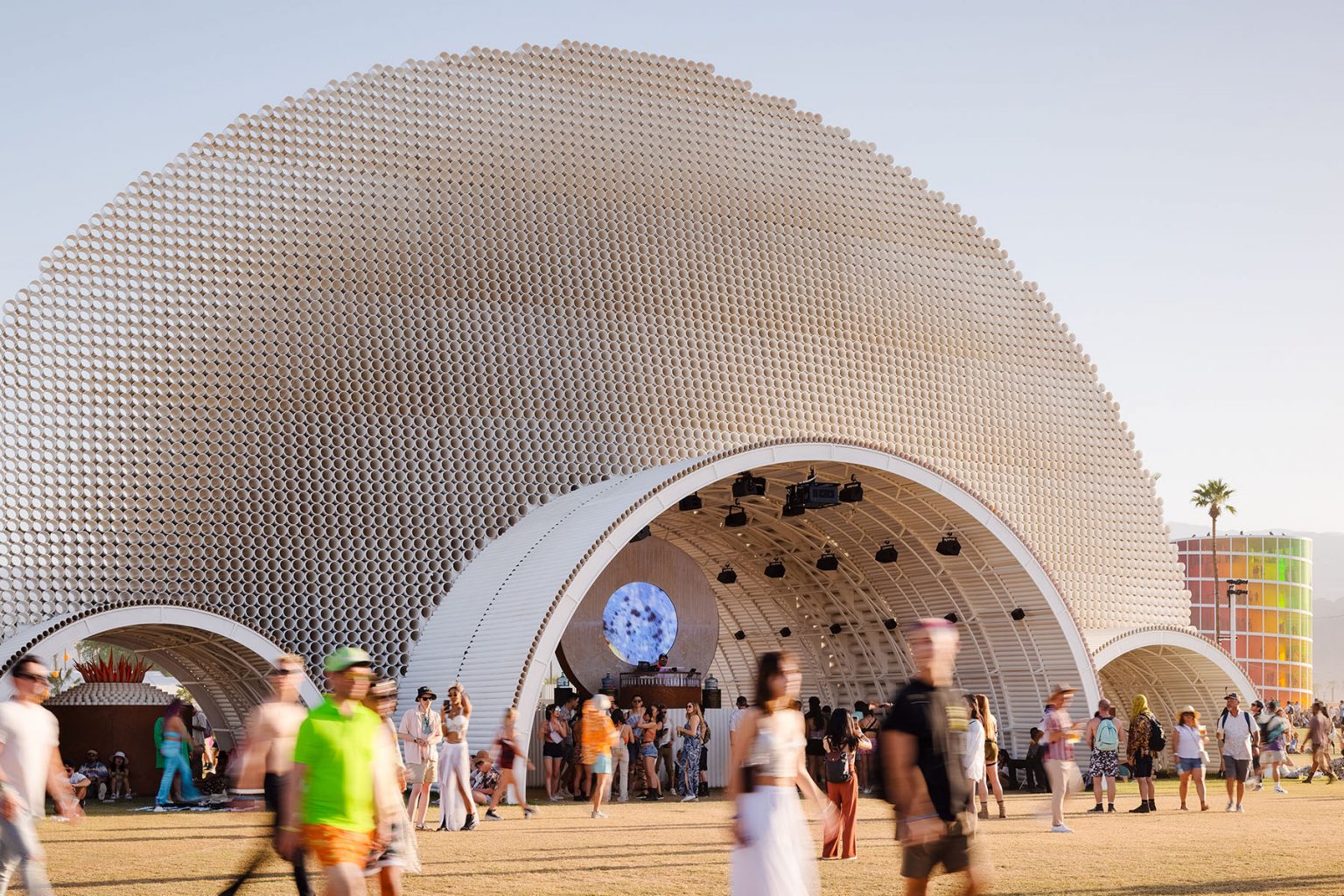 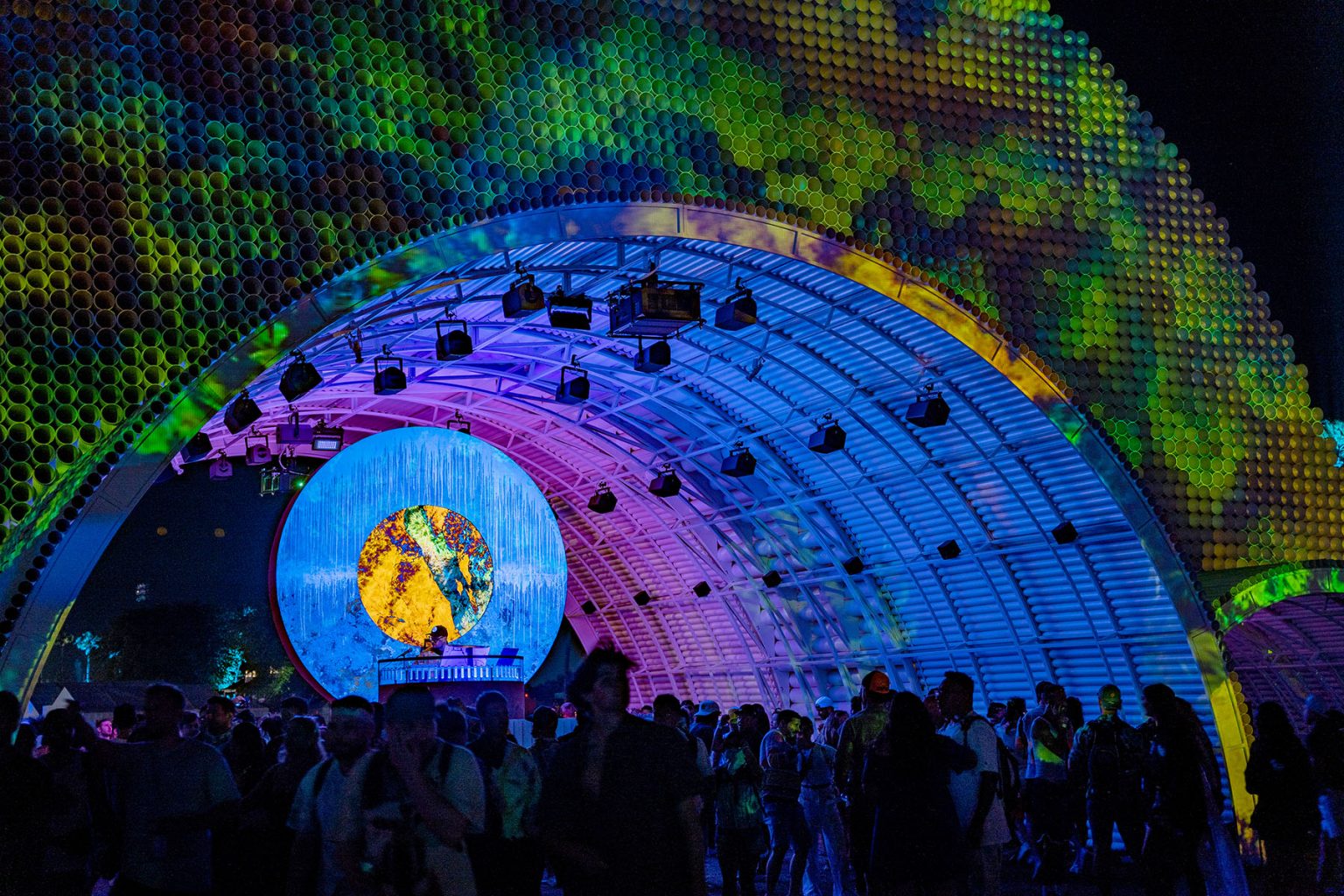 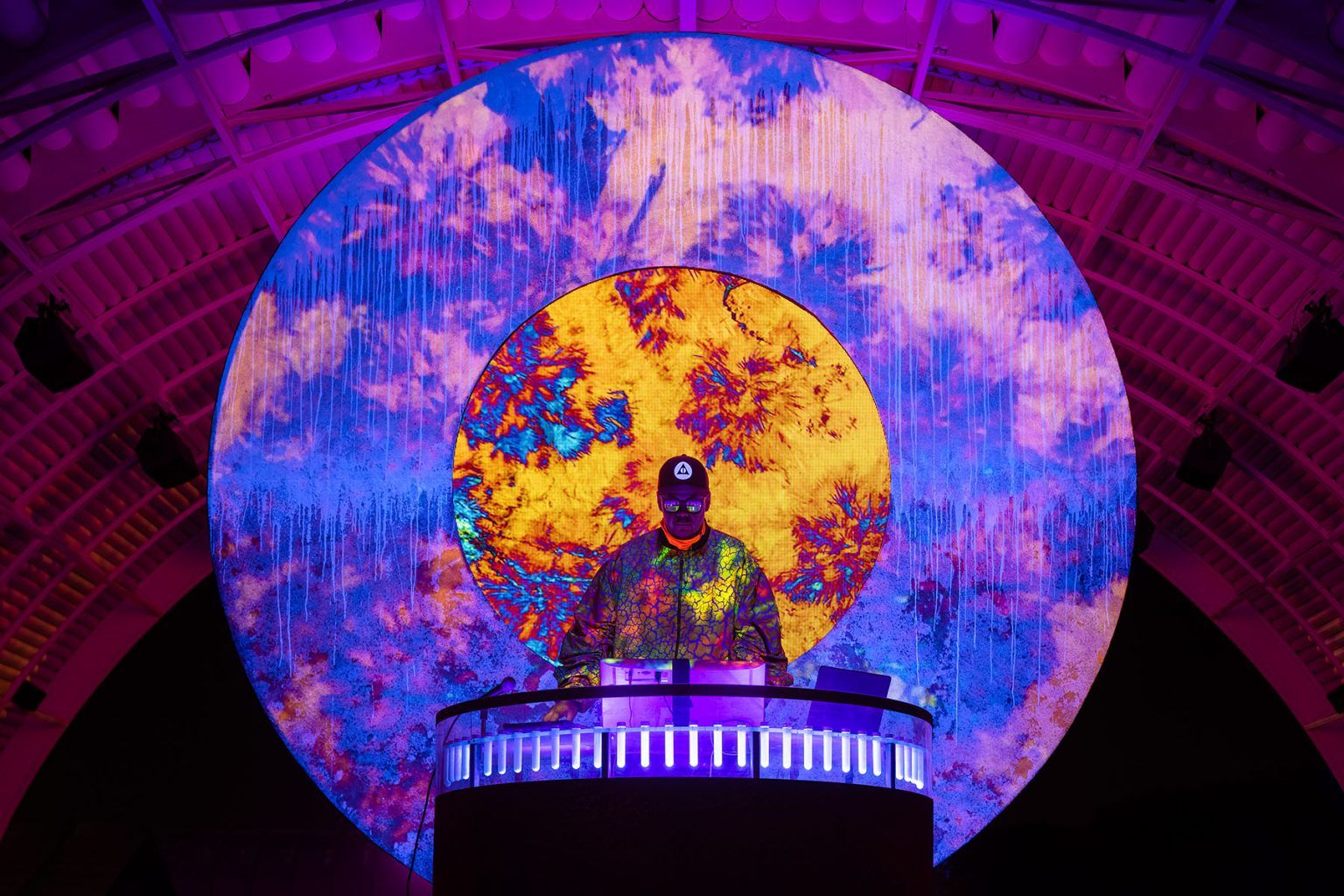 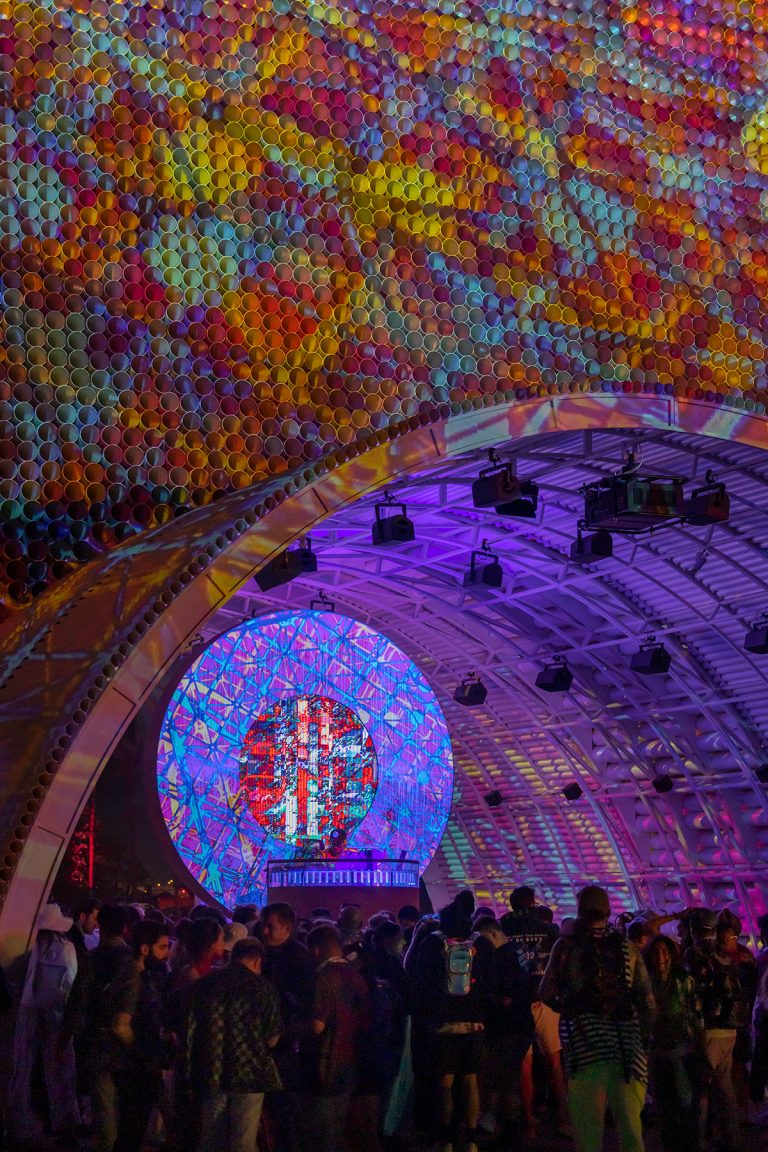 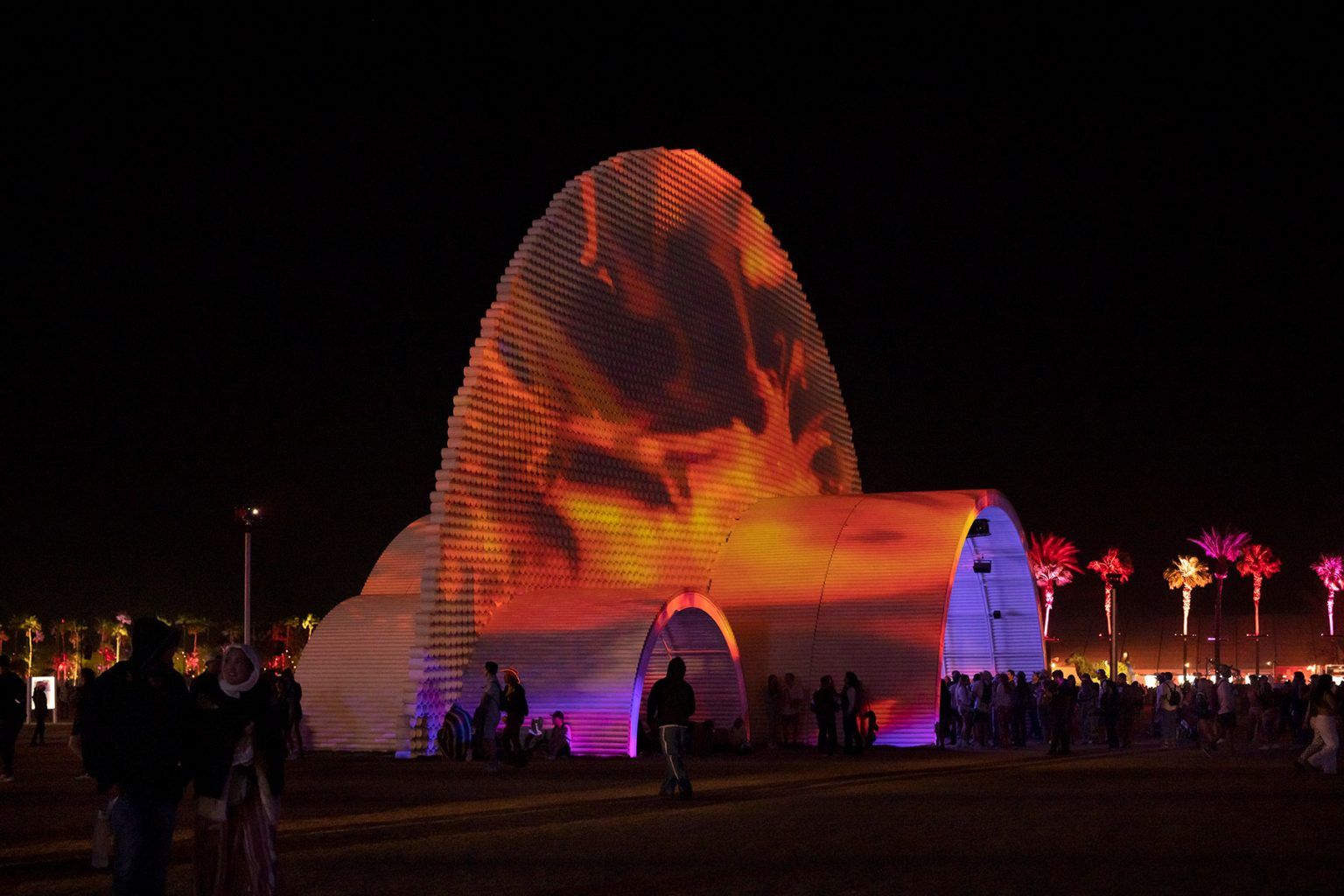 This past April, on the Empire Polo Club grounds in Indio, California, artist Cristopher Cichocki devised a remarkable installation: the five-story-tall Circular Dimensions x Microscape, constructed with more than 25,000 feet of PVC tubes, portraying a visual spectacle that examines the artist’s ongoing exploration of water and the history of the desert. The bandshell-shaped pavilion contained a living laboratory where scientists and artists generated experimental ‘video paintings’ by manipulating water, salt, barnacles, and algae from the Salton Sea under microscopes and projecting that activity in real-time inside the pavilion’s ‘nucleus.’

The stunning visuals had an equally amazing aural component as well, provided by L-Acoustics L-ISA immersive audio technology. A total of 60 speakers were deployed in the tunnel environment by sound designers Jonathan Snipes, who teaches sound design in the theatre department at UCLA, and Bobby McElver, a professor of wavefield synthesis at UC San Diego. The 57.1 system featured a combination of L-Acoustics X8 and 5XT coaxial loudspeakers supported by four SB18 subwoofers, while several Kiva II mini line arrays additionally delivered a mono version of the multichannel experience around the exterior of the tunnel.

Notably, the entire system was powered by the manufacturer’s highly-efficient new LA7.16i amplified controller, which was officially introduced at this year’s ISE and InfoComm. Offering an unprecedented 16×16 architecture in a 2U chassis with seamless Milan-AVB redundancy, each of the unit’s 16 output channels delivers up to 1300 watts at 8 ohms or 1100 watts at 4 ohms.

“With the new sustainability-focused LA7.16i, we were able to deploy only four amplified controllers occupying eight total rack spaces for this exhibit, which was a huge saving in terms of physical space versus using LA4X or LA12X,” says L-Acoustics Application Project Engineer Carlos Mosquera. “The LA7.16i also requires significantly less power to operate and generates less than half the heat of our other models, helping the tech room under the stage (where the video gear was also housed) feel less like an oven out in the California desert. Plus, the new amplified controller’s Milan-AVB solution is extremely fast and efficient to configure. Even though we had so many channels, the whole setup and calibration took less than half an hour. Thanks to the RAT Sound team, this was an ideal pilot deployment for the LA7.16i.”

“The audio I typically perform has a very three-dimensional spatialisation aspect to it,” explains the artist, Cichocki, whose last name is pronounced ‘cha-ha-skee’ and translates as ‘silence’ in Polish. “Bobby and Jonathan are sound-design professionals whom I’ve often worked with, and they suggested that L-ISA technology had the potential to take three-dimensional spatialisation to the next level for Circular Dimensions. As it turned out, the bandshell type of environment I had designed for the installation was perfect for that.”

Cichocki, who performed live DJ sets for several hours each evening, developed hours’ worth of audio content for the installation and performance comprised of tracks of natural sounds and other elements as disparate as Gregorian chants and recordings of speeches by environmentalist Greta Thunberg. These experimental sets evolved from ambient in the daytime, switching gears to a high-energy dancefloor at night, all configured in eight channels and played through Ableton Live.

The ever-evolving library of Circular Dimensions audio content wasn’t officially finalized until opening day, and it was only available in stereo format, raising the question: how does one create an engaging, immersive experience on the fly from only two channels?

To prepare for the event, Snipes and McElver spent a couple of days with Mosquera to create the system design for this project at the L-ISA Studio in Westlake Village, California, which also uses a large number of X8 and 5XT enclosures.

“Not knowing what tracks Cristopher would ultimately be using for his sets, Bobby and Jonathan took a variety of tracks—some percussive, some ambient, some melodic—and came up with numerous ways for the artist to control the movement of sound throughout the space with L-ISA,” Mosquera recalls. “First, they created a selection of snapshot presets that Cristopher could intentionally trigger from his iPad, which would cause the audio to move in specific ways around the loudspeakers inside the PVC tunnel. The intensity of these effects could also be controlled with a slider bar on his iPad, much like a wet/dry mix. Second, Bobby and Jonathan created multiple ‘reactive’ effects, which would also prompt audio trajectories—like sending everything to the center or panning audio in a wave from one side to the other. These would be automatically actuated when certain frequencies or other thresholds were crossed in the playback material. This second approach created some really interesting, creative movements without the artist having to initiate them personally. The two approaches combined allowed Cristopher to take any material he wanted to play and decorrelate just two channels into dozens of outputs in L-ISA, creating a pretty incredible aural experience.”

Through the larger final system onsite, as Cichocki was mixing on the fly, the audio content passed through processing engineered by Snipes and McElver. “Cristopher is a visual artist who provided the audio content but wasn’t rearranging it. He’d be pulling from that content live in the moment, like a DJ, so we weren’t able to pre-author any trajectory information,” confirms McElver. “Instead, Jonathan and I built tools Cristopher could use to pull specific types of sounds and rhythms as he needed them. Some of those were reactive, and everything went through a real-time spectral and timbral analysis so that it could be connected to other sounds and rhythms that way.”

McElver used Cycling 74’s Max 8 for that analysis, then set up macros using the snapshot feature in the L-ISA Controller, which allowed Cichocki to instantly call up specific bits of audio content, even as the rest of the content continued to play in automated mode through the L-ISA Processor II.

“Cristopher could see where the various audio objects were in the L-ISA Controller on the iPad, and he could change the speed and intensity of the other audio sources using an intensity slider we provided,” says McElver. “He could send sounds flying across the space—‘trajectory gestures’—but then the system would revert back to automated mode, so there was never any interruption to the sound.”

Snipes describes himself as the ‘middleware man’ on the project, creating the means for Cichocki to keep adding and changing the audio yet never letting it stop playing. “I was looking for the sweet spot where he could have control over the performance and its intensity and other parameters, but also making sure there was sound activity going on at every moment, some of which was random and some reactive,” he says. “What L-ISA brought to this project was a way to put all of those discrete sound sources in one place and then let them move and keep moving, either intentionally or automatically. L-ISA has the tools for that, and it’s robust enough to do it in a desert environment.”

The crowds who came to experience Circular Dimensions x Microscape weren’t the only ones that were impressed; Cichocki was equally wowed with the results. “What we accomplished with L-ISA was nothing short of spectacular,” he adds. “It was thrilling watching as people moved through the tunnel and wondered how the sound could move around the way it did. It put the sound on the same level as the visuals. That’s pretty remarkable in the art-installation world.”