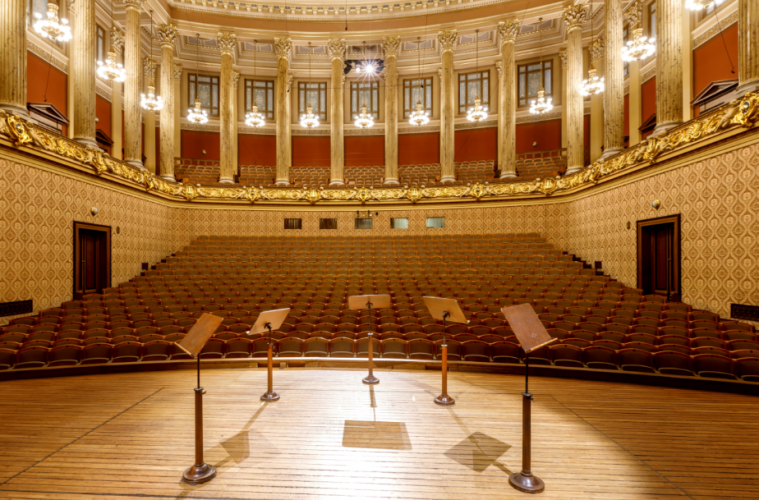 Conceived as a multi-purpose cultural centre combining exhibition rooms with concert halls, the Rudolfinum is one of the most architecturally remarkable buildings in Prague. It is also the home of the Czech Philharmonic Orchestra, which first performed in the Rudolfinum’s world-famous concert hall in 1896 under the baton of famous Czech composer, Antonín Dvořák.

Today it is still the most prestigious concert hall in Prague. The 1,100-capacity Dvořák Hall, also one of the oldest concert halls in Europe, is renowned for its remarkable acoustics and is a sought-after venue for recording classical works. KV2 Audio recently designed and built a completely custom audio solution to address specific acoustic issues whilst meeting the strict architectural and aesthetic requirements of the listed building.

The exceptional acoustics that lend the Dvorak Hall its distinctive sound is also the reason for which the venue has battled for years with the reproduction of amplified speech. Efforts to resolve this have always run up against limitations in the performance of proposed solutions, as well as the very strict requirements of the Rudolfinum’s listed building status, which prohibit technical installations that are not in keeping with the architectural aesthetics. “We have been struggling for a long time with insufficient intelligibility of the spoken word in the Dvořák Hall,” admits Radomír Stöhr, Technical Administrator of Rudolfinum. “It was never ideal due to the particular nature of the acoustics which have a very long reverberation, especially in the mid frequencies.”

Jiří Krampera, Sound System Designer and Founder of KV2 Audio, was called in to see if he could resolve the problems. David Mareček, CEO of the Czech Philharmonic, welcomed the cooperation with KV2 Audio: “We have excellent experience with KV2 sound systems, in particular with the annual Open Air concert in June, which heralds the end of the Czech Philharmonic’s concert season and is broadcast live on Czech television. We felt that if anyone could help us with these longstanding issues, it was Jiří Krampera and the team at KV2.”

Led by Krampera, the team designed and built a fully customised system, placing equal emphasis on both controlled dispersion and minimising the effects of reverberation from above. This was achieved by designing the system in such a way that it would not disperse towards the ceiling, but instead playing directly towards the audience. The physical constraints of the building meant that the spaces available for loudspeaker placement were not optimal for standard loudspeaker coverage patterns, therefore it was necessary to design custom horns in order to meet the required dispersion characteristics.

Technological advances through KV2’s Super Live Audio (SLA) research, such as a newly developed 5” low inductance midrange driver, meant the fastest and most accurate midrange was available as a critical part of the system design. This ensured clarity of vocal reproduction and extreme resolution, even in the most reverberant areas of the hall.

“At KV2, we try to minimise the distortion of the entire electroacoustic chain, which is why we have maintained the complete signal path in the highest possible, fully analogue quality. We completely avoid any digital processing here which really helps” emphasises Krampera.

The sound booth for the Dvořák Hall is equipped with a pair of active EX6 speakers from the standard KV2 production portfolio and a Soundcraft Analogue mixing console, which has been specially modified in KV2’s labs for high resolution sound. Passive ESD10 monitors (driven by an ESP4000) were provided for the choir and a pair of ESD6s for the backstage area are powered by an ESP1000 amplifier.

The sound project also included the 190-capacity Suk Hall, which is historically the youngest hall in the Rudolfinum building and typically used for chamber performances. Krampera’s team equipped this space with a pair of specially designed three-way active speakers with very high resolution and controlled dispersion (4x 6” low-mids, 1x 6” mid, 1×1.75” high). An important characteristic of this system is the full-range frequency response and optimised coverage. The slim passively cooled amplifier has been built into the wall for minimal visual intrusion.

“I am very proud of the work of my team who faced difficult conditions with this assignment, necessitating a majority of tailor-made, unique solutions,” says Krampera. “We were able to capitalise upon our many years of experience in building world-class sound systems that respect our technological principles of high dynamic range and minimal distortion in order to deliver the audio experience that the Rudolfinum has been dreaming of for so long. The technicians are thrilled with the results, as are the audiences.”