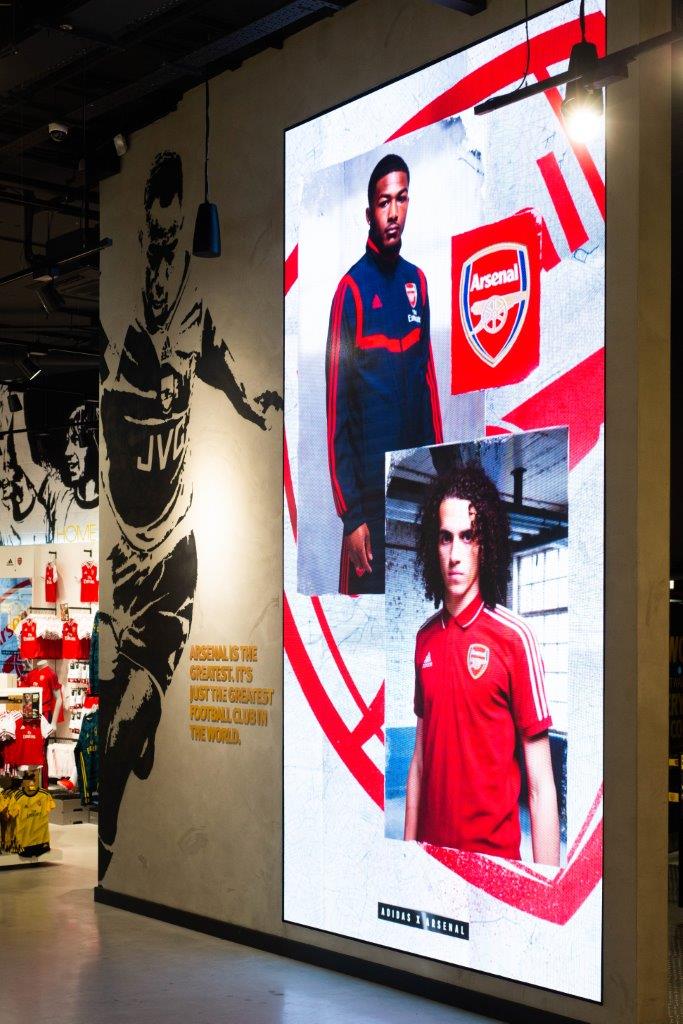 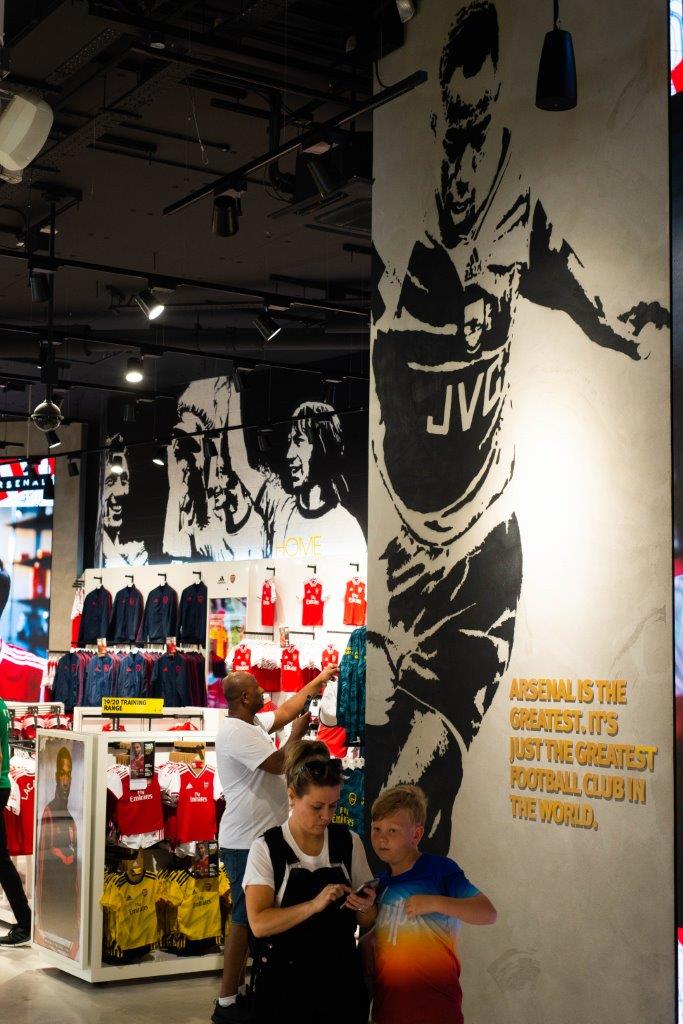 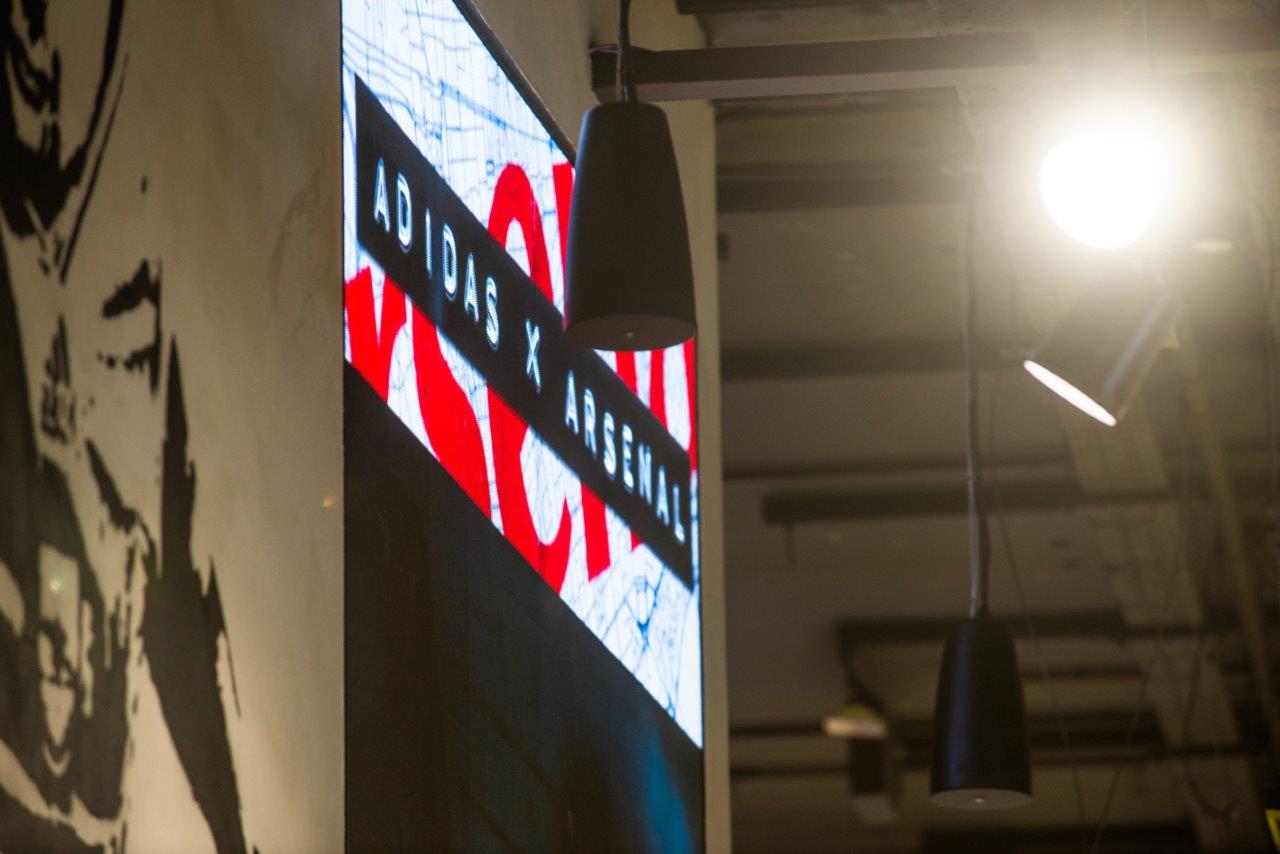 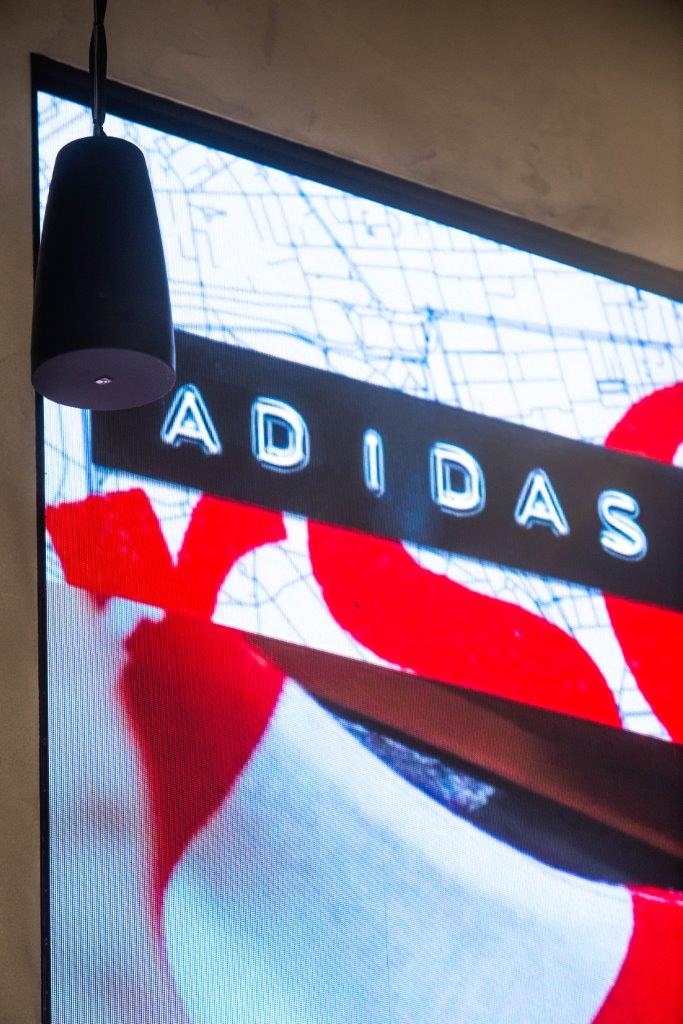 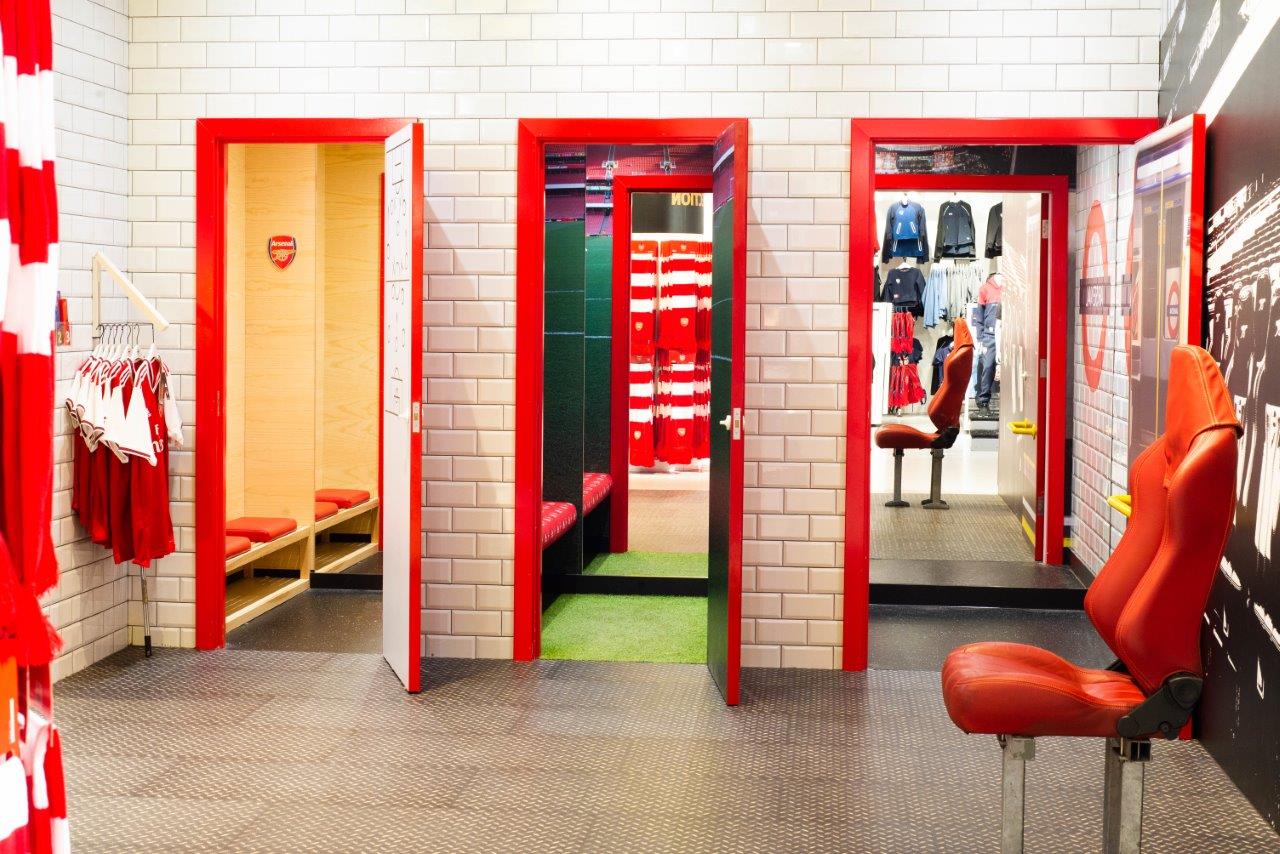 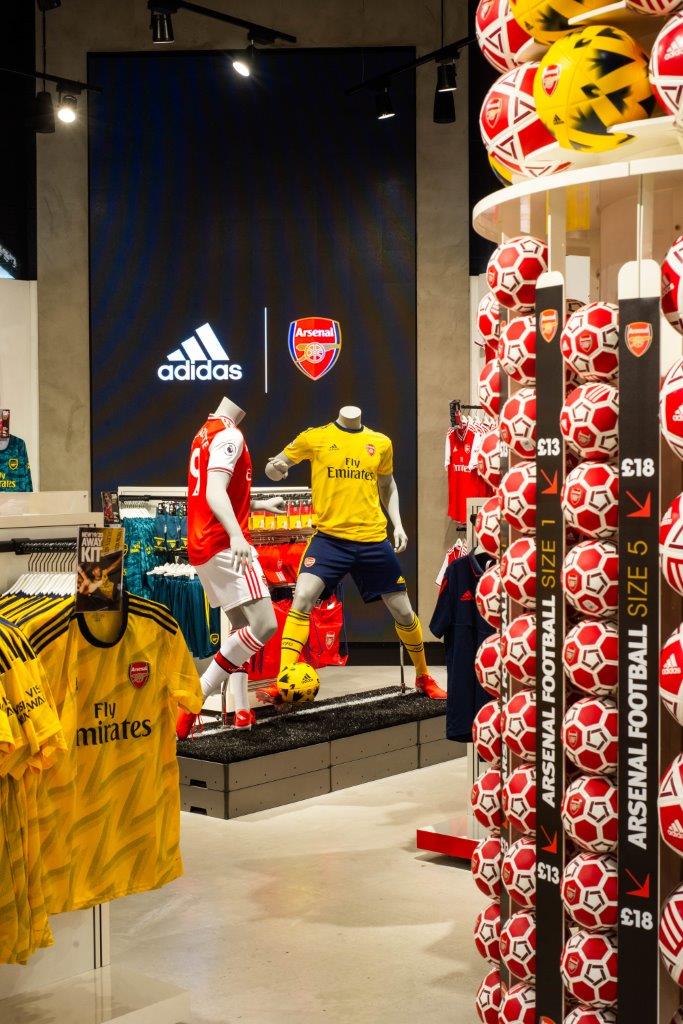 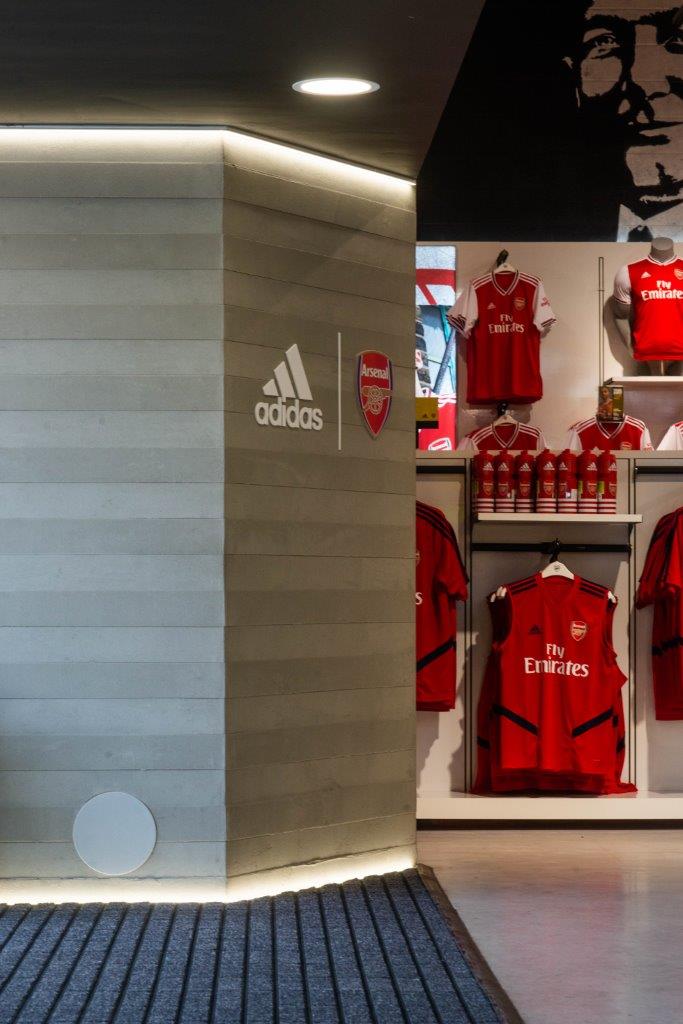 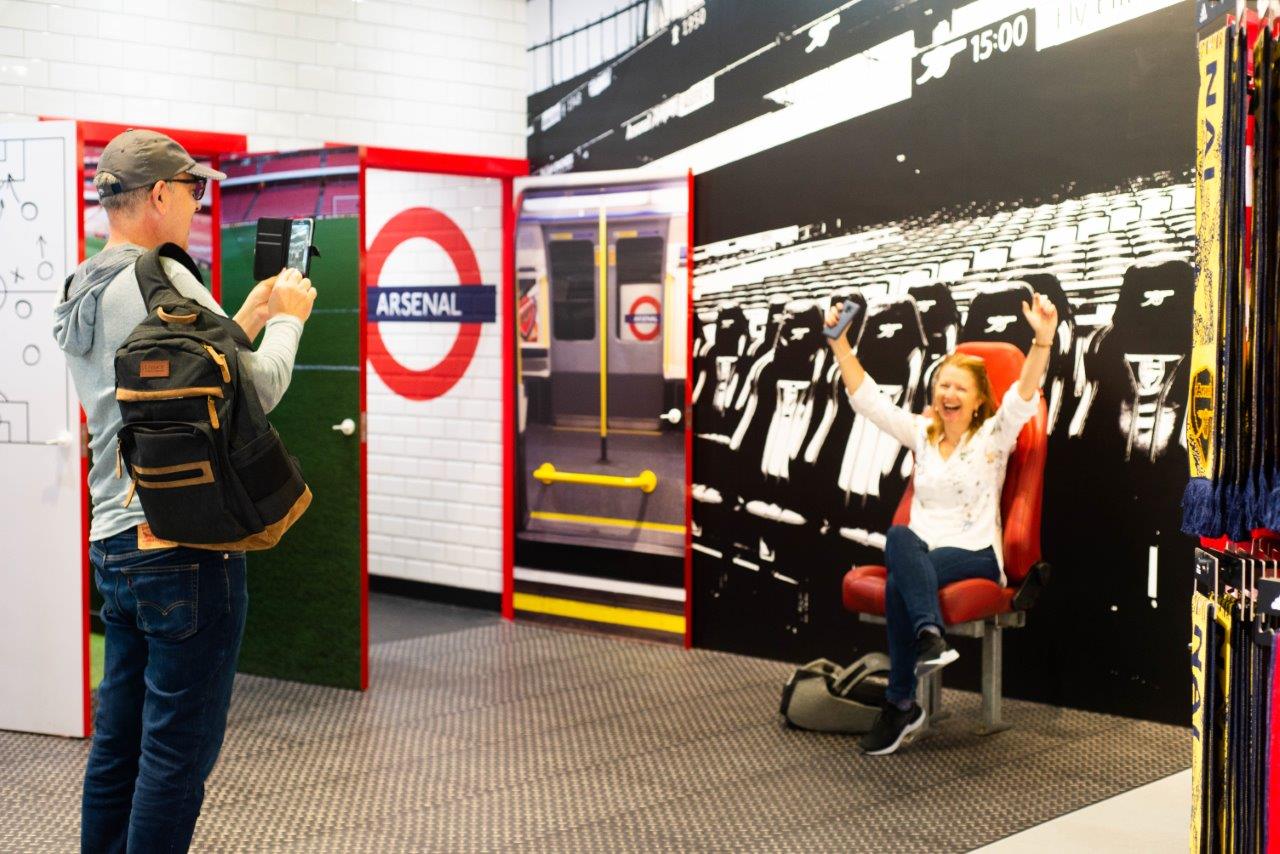 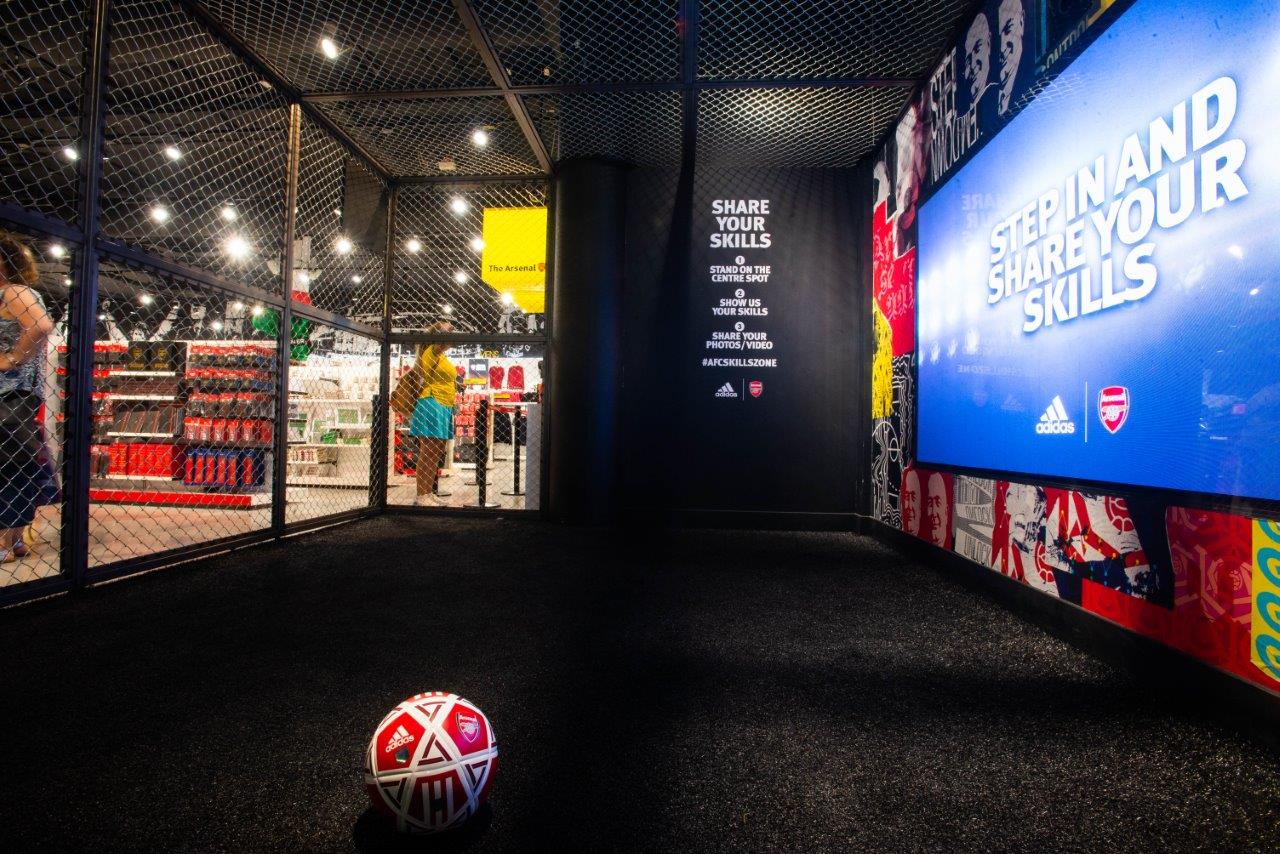 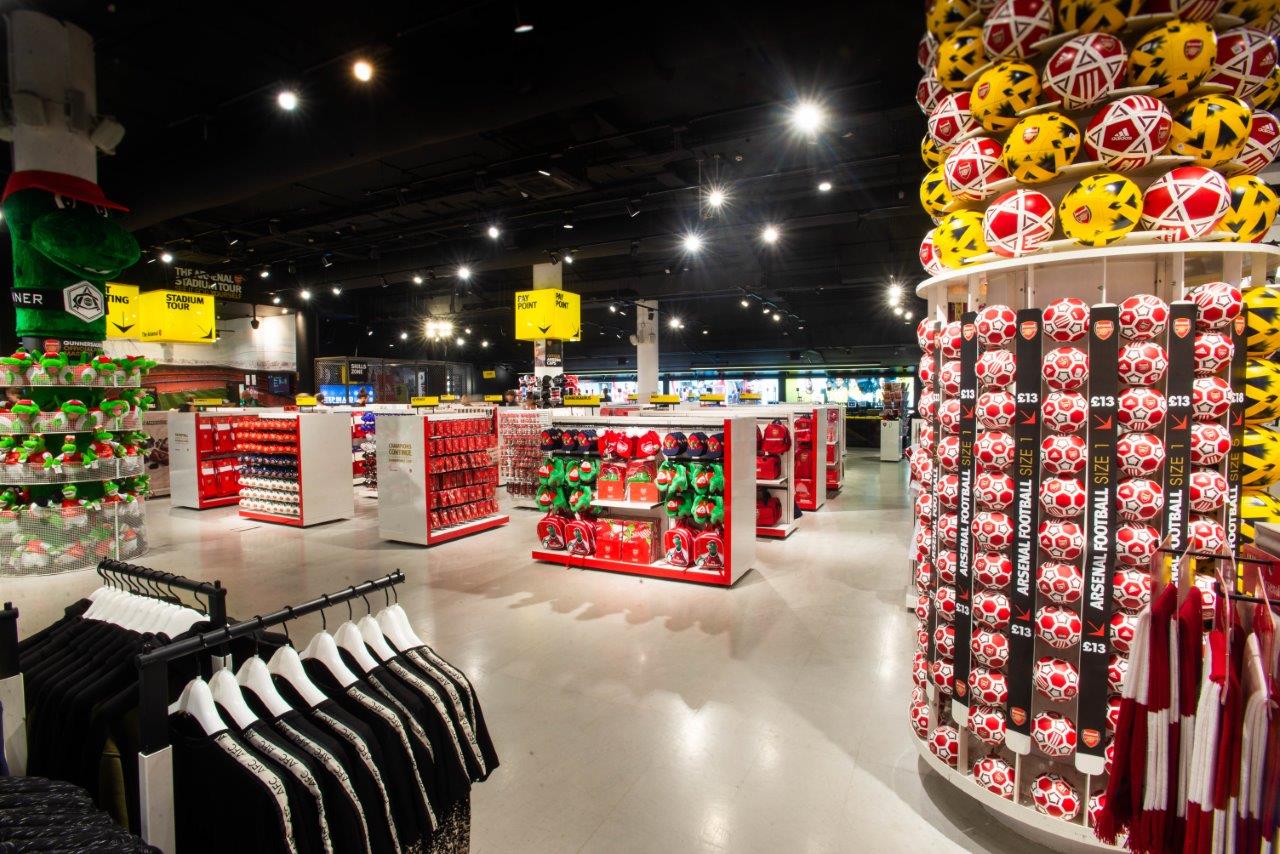 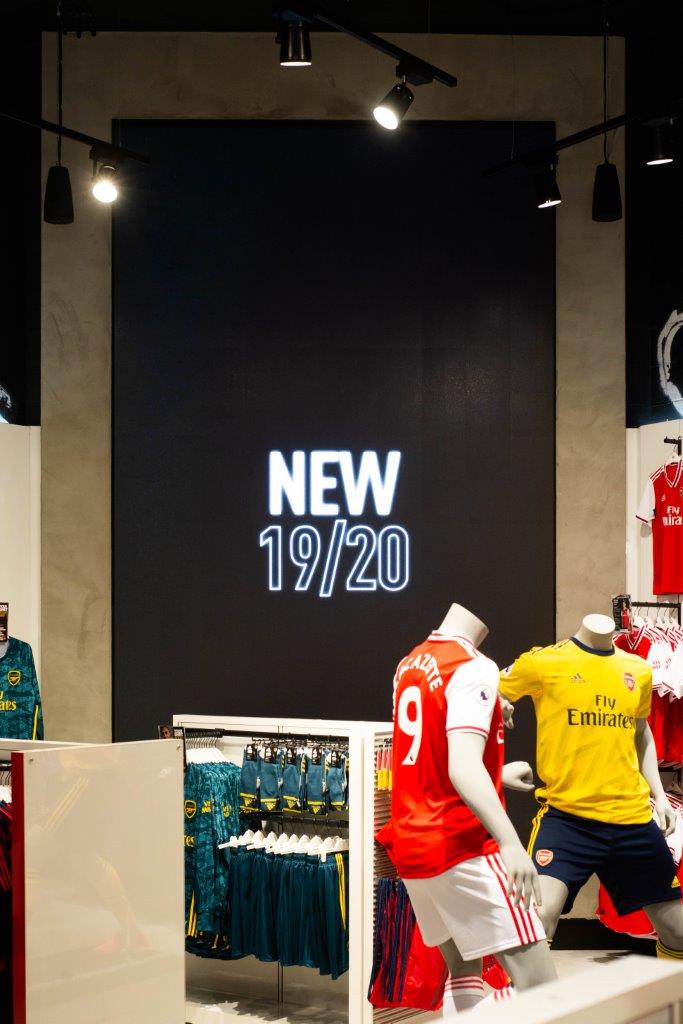 A comprehensive refurbishment of Arsenal FC’s flagship store has provided the opportunity to combine audio effects and video displays in a multizone AV design, created to empower the retail experience with the sights, sounds and excitement of match day.

The Armoury re-design, launched at the beginning of July 2019, has been timed to celebrate Arsenal’s renewed partnership with sponsor adidas and reveal the 2019/20 home kit.

‘The new store’, says Arsenal’s website, ‘is a shrine to nostalgia and the club’s rich history with adidas, and includes a caged skills area where you can have your skills rated by a member of the first team. Customers heading into the store will can see a host of exciting digital content on the in-store large screens and experience the thrill of a match day by sitting in the manager’s touchline chair and sampling the smell of freshly-cut grass in the stadium themed change rooms.’

Commenting on the refurbished space Arsenal retail director Simon Lilley, says, “The newly refitted Armoury is our flagship store at Emirates Stadium and we’re proud to provide a best-in-class retail environment for our fans”.

The brief required immersive sound for a new virtual ‘player tunnel’ at the entrance to the store; atmospheric sound for three themed changing rooms; precise audio level and intelligibility for the areas in front of two new video walls, and high quality continuous SPLs for ‘The Cage’, a Virtual Reality area where customers can enjoy training pitch skill challenges with the Avatar of a first team player.

The Knektd team relied on Ease software to optimise the sound in each zone and to blend individual audio zones globally with the store’s in-house sound. Ease analysis also provided Knektd and 442 with a design blueprint to agree prior to installation.

Stewart explains, “We were absolutely delighted to be asked to pitch for this prestigious project by 442, after recommendation by the Armoury’s music streaming provider and audio effects creator Open Ear. 442’s specific brief was for immersive sound to create a sense of a shared experience with the Arsenal Club and team.

“Essentially the new Armoury would be an audio experience as much as a visual one, the two coming together to inspire customers with the excitement of a match day. A greater sense of ‘being there’ would generate stronger customer loyalty and sales. So the challenge was to create believable atmospherics in specific zones.”

Stewart adds, “Customers gain access to the new Armoury through a walk-in player tunnel, imbued with a realistic match day ambience that places them with the players on their way to the pitch from the locker room. To create this effect the sound needed to be non-directional with no obvious source, so we used three Sonance IS4C invisible speakers in the ceiling. These are entirely concealed behind plaster, but retain high intelligibility and dynamic range for the most natural simulation.

“To complete the surrounding ambience, we installed two Sonance Pro Series PS-C63RT 6in in-walls at low level on the tunnel sides. Triggered by a PIR sensor these reproduce the sound of football boots on a hard surface allowing customers to imagine they’re walking with the team. Then we used Ease EQ software to mix the output for a realistic effect within the tunnel and to blend tunnel ambience with store’s background sound.”

The changing rooms and video walls

Stewart explains, “Part of 442’s design for the new Armouryinvolved changing rooms with a choice ofdesign themes based around the sightsand sounds of the Arsenal Tube Station,the Club’s Locker Room and the EmiratesStadium itself.

“For added authenticity these areas are enhanced by individually designed soundtracks played through a Sonance Pro Series PS-C43RT 4in in-ceiling speaker installed within each booth.”

Stewart explains that forthe area around the large LED displays the company designed a sound field loud enough to draw shoppers’ attention without being overly dominating.

Two Sonance Pro Series PS-P43T Pendants were used for each, allowing the team to set a precise height for the speakers, blending with store aesthetics while delivering optimal sound levels around the screens.

The cage and challenges

The new retail space also offers an interactive feature called ‘The Cage’. It is, literally, a caged area in front of a large LED screen, in which customers can practice football tricks with a virtual first- team player. The brief here called for immersive high output SPLs over longer durations, so a Yamaha Stagepas PA system was deployed for this zone.

As for particular challenges on this project, Stewart states “Offering easier access and greater install flexibility, the larger retail space at the Armoury made wiring and speaker installation fairly straightforward. The design brief did however require the most discreet installation in order to allow the various ‘being there’ illusions to do their work.

“The major creative challenge brought our experience and judgement to bear on 442’s design vision. We had to justify our choices and simulate the audio performance on paper before any work started. Using Ease software we could switch speakers and change their positions in real time to design the simplest way to achieve optimum coverage.

“This process proved invaluable in building understanding between the teams and ultimately, delivering the audio results they were after. Of course, this was the most satisfying part. We also built in some level control to enable shop staff to adjust the system for busy match days and other days. Some degree of staff training was required.”