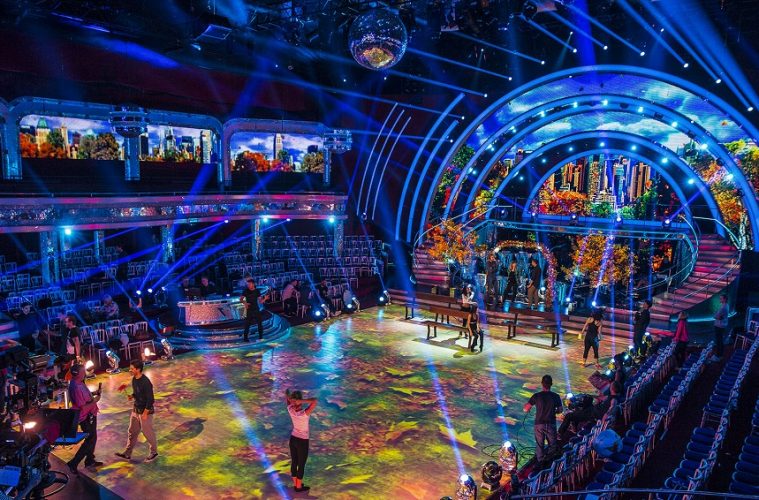 UK based rigging specialist DLM Events supplied various Kinesys automation and flying elements in its role as production riggers for the latest series of the BBC’s massively popular ‘Strictly Come Dancing’, recorded on the George Lucas 2 Stage at Elstree Studios in Hertfordshire.

DLM has been involved in specialist rigging aspects of Strictly for the last five years.

When the prime-time series moved out of the BBC TV Centre in Wood Lane to the larger space at Elstree Studios in 2012, its role expanded to cover all the standard production rigging – for lighting, set and standard rigging – in addition to the special effects and performer flying.

“There was some serious pressure,” explains DLM’s automation director Erlend ‘Spider’ Webb who co-ordinated this project, “and that’s why we work with Kinesys equipment, because it’s absolutely rock solid”.

Two half tonne Kinesys Liftket motors were used at Elstree to fly trussing that in turn supported a counterweighted theatre style fly-bar system above the dancefloor used for various tasks throughout the run.

Two Kinesys ZF (Zero Fleet) 200 performer flying winches were installed to assist with an assortment of flying effects for the themed weeks like Halloween and Christmas.

For the Blackpool episode at the Tower Ballroom, DLM again provided all the rigging including two of its new fully SIL3 compliant Kinesys ZF (Zero Fleet) 200 performer flying winches, which were utilised for air-based stunts like judge Craig Revil Horwood’s entrance on top a giant scenic guitar.

A bit later that evening, actress and dancer Georgia May Foote flew in to the action on a large moon prop and other aerial gags facilitated by DLM Events and the performer flying system included silk acrobat-dancers.

This year DLM installed a 5.5 tonne capacity mother grid in the venue complete with a full Kinesys LibraCELL load monitoring system, which enabled them to constantly keep an eye on the weight loading spread across the entire grid.

Two of its Kinesys ZF 200 performer winches with Kinesys Velocity V2 drives and full monitoring control were specified to deal with the combination of people flying and effects, which featured in both the ‘production numbers’ and individual dance routines.

All the moves were programmed and run using a Kinesys Vector control system which promised to provide the accuracy, flexibility and speed needed. With only 60 – 90 seconds between dances to re-set and prepare for the next flying cue, it was essential that the automation was well choreographed.

“Safety – along with the reliability – is another reason we use Kinesys” notes Erlend.

“There’s is no margin for error, and we have to be spot-on all the time!”

The Blackpool schedule was tight. All production departments got-in on the Tuesday and everyone had to be fully rehearsed and ready to go live on Saturday.

A special automation-only rehearsal took place on the Thursday evening to ensure all the specialist moves were fully sorted and that cast and crew were on-message.