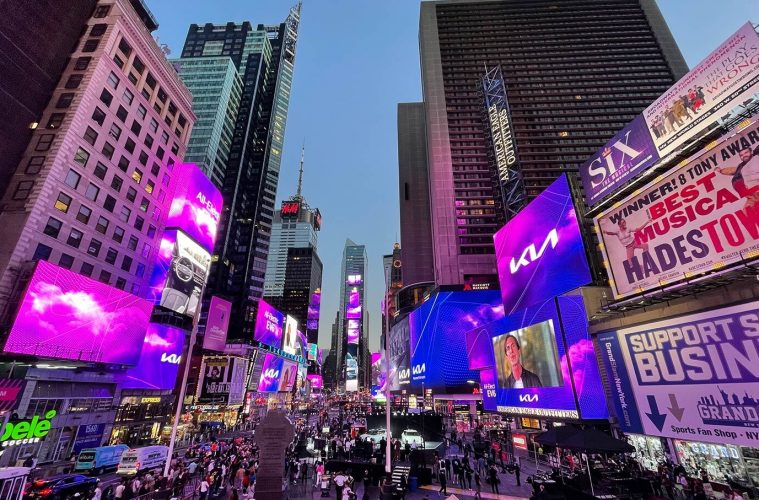 Kia takes over Times Square with disguise for its EV6 launch

When Kia launched its electric EV6 crossover vehicle in New York City’s Times Square, the automaker relied on the disguise Designer software to accurately pre-visualise the custom video content that would immerse the iconic location. 44 LED video displays spanning six city blocks lit up the square to reveal the new vehicle and Kia’s “Charge the City” vision of an electrified future.

“Times Square is an American landmark with a huge number of LED video screens and pixel capacity – it’s almost overwhelming in a way,” says Troy Fujimura, Head of Design and Technology at Centerstage who acted as the project’s Screens Technical Producer.  “To have the chance to completely take over all those screens with our custom content was really a unique experience.”

One of the creative drivers for the launch show was the ability to create a flow of content between and over the various buildings’ LED displays and up the vertical screen at One Times Square; site of the famous annual New Year’s Eve ball drop.

Centerstage were invited by the event producers at Gail & Rice to ensure the technical production for the event. According to Fujimura, Gail and Rice knew they needed to pre-visualise the concept straight away. “They said, ‘the only way we can do this is to pre-vis, and the only way to pre-vis is in disguise,” he recalls.

“Understanding the physical spacing [of the screens] in relation to how the creative direction was going to be achieved was huge for us,” he says. “The only way to do that was in an actual 3D model in Designer.”

Designer is the ultimate storytelling tool from disguise, used to visualise, design, and sequence productions, live shows or installations from concept all the way to go-live. Using Designer helped create a visual language between the content, marketing and production teams and the end client, enabling everyone to understand creative goals and challenges and work out the technical solutions.

“Kia’s senior management was in Southern California and Korea, and with such a diverse and global group, working with disguise was the only way to convey our ideas with different teams in other locations,” notes Fujimura.

All of the 40 different show files were rendered out and placed in a timeline in Designer. The team at Centerstage then created a 3D model of Times Square, modeled all the screens to be pixel accurate then UV-unwrapped the models to match the existing content templates.

“I’m familiar with the disguise workflow so it was easy to teach it to the content creators. I gave them all of the file delivery specs and showed them the way we modelled them. So it was a very clear and straightforward path between content production and seeing content straight away on the model, unlike other workflows that can be somewhat confusing and time-consuming,” Fujimura adds.

Experiencing the night time Kia launch, which was witnessed by New Yorkers and visitors in Times Square as COVID-19 restrictions eased, proved to be a very special and rewarding experience for the entire team. “Seeing people immediately pull out their phones and take photos of all the content surrounding them and watching them being wowed by this overwhelming look was fantastic. All of the pre-planning paid off, and the show looked great!”