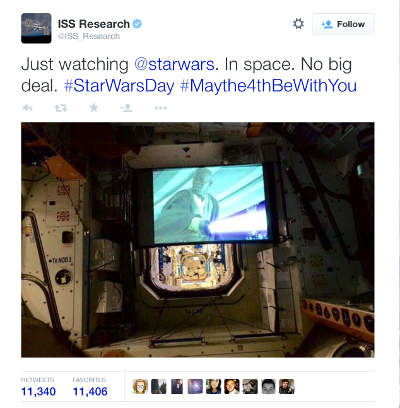 After reporting that Screen Innovations custom designed the first projector in space for NASA earlier in April, Commercial Integrator Europe can reveal that the first film watched on the screen was none other than Alfonso Cuarón’s Gravity.

The screen was officially installed to allow crew members to enjoy an enhanced viewing experience for video chatting with their families and conducting training and simulated operations, previously relying on laptop computers.

Seemingly the astronauts couldn’t resist utilising the ISS ViewScreen, (a portable, 65-inch, ambient light-rejecting, zero gravity screen) to explore its full potential; watching Gravity as it was meant to be seen: on the big screen whilst hurtling around the earth – why not?

Later celebrating May the 4th in spectacular fashion, the astronauts enjoyed a Star Wars film on their custom screen.

How exactly were the astronauts able to tweet? Scott cleared that up too: