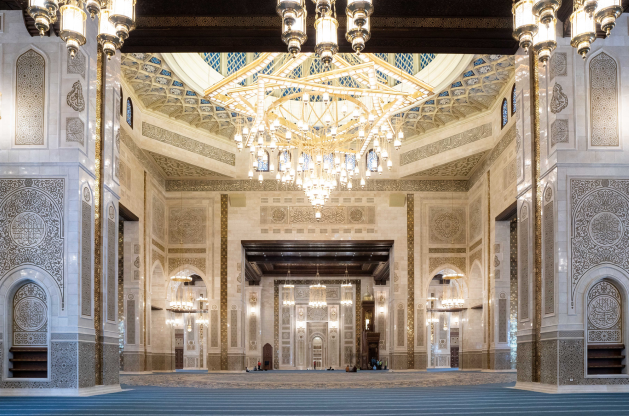 HOLOPLOT has provided its expertise for the Misr Mosque

HOLOPLOT has announced the successful installation of its flagship technology inside Misr Masjid, a newly-built mosque of incredible scale, central to the development of the country’s new administrative capital outside of Cairo.

As one of the largest mosques in the world, the Misr Masjid project presented the unique challenge of delivering clear, intelligible speech to a congregation of thousands in a space of over 10.000sqm – without compromising the architectural integrity of the building’s mainly marble interior.

A conventional sound system may require upwards of 30 positions to achieve sufficient coverage and intelligibility within such a space. HOLOPLOT provided unmatched audio coverage throughout the mosque, requiring only nine loudspeaker array positions. Each array is mounted as high as 23m above the floor, concealed at a significant distance from the listener behind painted cloth or metal. The entire audio system rendered ultimately invisible to worshipers.

Central to HOLOPLOT’s unique approach is the ability to perfectly control and shape sound in both classic and more complex environments, manoeuvring highly reflective spaces with unprecedented accuracy. In this instance, X1 handled an existing reverberation time of 6s, caused by both the marble interior and 60m high dome, managing not to excite the reverberant field – directing energy away from reflective surfaces and preventing the need for large amounts of acoustic treatment.

Speaking on the project, Emad El-Saghir, Fellow at HOLOPLOT says: “This grand mosque is an exemplar of X1’s technological capability. We introduced several brand-new system concepts that are not attainable with any other technology. The X1 Matrix Arrays utilize advanced optimisation algorithms to generate uniform coverage in tightly defined zones with minimal spill to dedicated quieter areas or reverberant surfaces.

“This way, speech transmission and the direct-to-reverberant ratio were increased to record values. A steerable-line-array-based solution would have required the deployment of far more arrays to achieve anything comparable.”

Emad Shenouda, Projects Director at integrator Audio Technology comments: “I’m pleased to say that together with HOLOPLOT, we met the client’s brief of creating a fully integrated system that satisfies all stakeholders. The project was full of challenges, starting from the size of the mosque, the room acoustics and of course project deadlines. Thanks to X1’s ability to not only control sound in the vertical but also horizontal it achieves unbelievable intelligibility, thought impossible in a space clad in marble and featuring a huge dome at its centre. HOLOPLOT exceeded our expectations in both the quality of sound, and in hiding the equipment in such a way that it blends in seamlessly with the interior.”