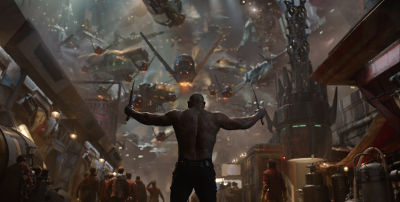 Guardians of the Galaxy Goes Wireless With Lectrosonics

“Writer and director James Gunn was very descriptive,” says Simon. “I could tell from the moment I met him that he had really, really big plans for the movie with regard to the sound and the sound design.

“Lots of the time when you meet a director they’re very visually descriptive, but James knew exactly what tracks he was going to have playing in the score. The movie is a celebration of 70s music so one of the challenges was to record clean and intelligible dialogue while at the same time blasting 70s club music on set.

Having spoken to James and understanding how much he wanted the ability to pump the music and how intricate and detailed his sound design was going to be I decided that this movie for me was about one thing: getting the actors’ voices as close up as possible

“We had 10kW of sound on set,” he reflects. “We had a subwoofer – and that was to create the correct mood and timing of set pieces, not just for the cast but for the camera moves and special effects cues too. So when we wanted to crank it up, which James did a lot, it would be as loud as a nightclub on our stages.”

Simon continues: “Having spoken to James about the noise levels and how full of action this movie was going to be, I decided my workflow was going to be slightly different. On other movies I like to celebrate the changes in perspective of the cameras and to actually celebrate the different acoustics of different sized shots.

“Having spoken to James and understanding how much he wanted the ability to pump the music and how intricate and detailed his sound design was going to be I decided that this movie for me was about one thing: getting the actors’ voices as close up as possible.

“What I wanted to do was to record the actors as cleanly and as close as possible because that in turn would give the re-recording mixers (Christopher Boyes and Lora Hirschberg) and James Gunn the ability to really use music cues expansively without compromising the other elements of the sound design in post and add layer upon layer of sound.

“I wanted them to be able to push the music as loud as they wanted and still have dialogue that would cut through and be intelligible.”

“There used to be three issues with radio mics: the first issue was range, the second was sound quality, and the third was rigging them on quiet costumes,” Simon reflects.

A trick that Simon used to help deal with on-set noise levels was picked up from his work on Les Misérables. By running induction loops on every single set (even if it wasn’t requested) he allowed the music to be run out of the 10kW rig until the moment one of the characters began to speak – during which the music would dip out of the speakers. When they were finished, the music would seamlessly come back into the speakers.

For the director, the producers and any actors who required hearing the music in the scene – say for walking in rhythm or dancing in outer space – the music could be sent directly to their ears using the induction loop and earwigs.

“It’s all about collaboration, I try to never present the director with any kind of problem that restricts his ability to tell the story visually the way he needs to tell it,” Simon concludes. “If I get through a day without having to ask the director to adjust something visually so I can record clean dialogue I know I’ve had a great day at work.”