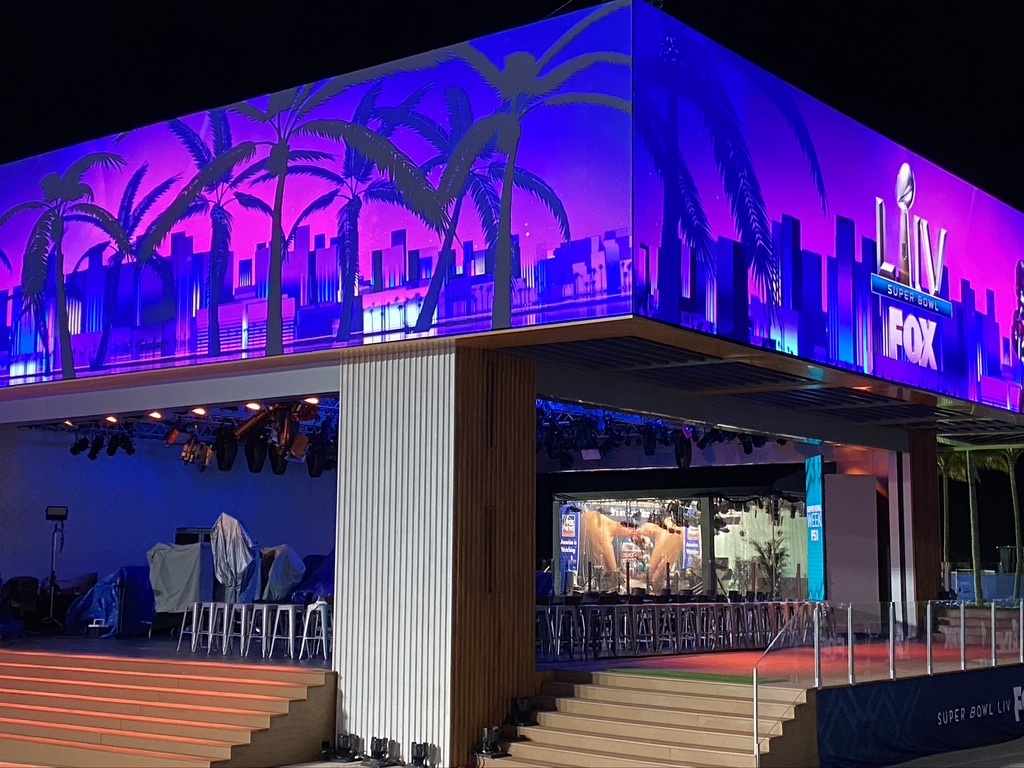 FOX Sports built a South Beach studio compound for its coverage of Super Bowl LIV in Miami, collaborating with Creative Works London on the studios’ set content package, which featured disguise solutions driving more than 50sq-m of LED video at the compound.

The South Beach location, just steps away from the ocean at Lummus Park, included two separate stages with LED mounted high on their facades and a large demonstration field with an LED video wall backdrop. Occupied by Fox Sports, FS1 and Fox Deportes, the compound hosted an extensive amount of Super Bowl Week coverage and the pregame Show.

“When a client like FOX Sports pops up asking for a ‘concert style’ graphic system, and you are a branding and content creation studio with a wealth of experience in live events content production you jump at the chance.  That’s how it began for Super Bowl LIV,” recall Jeremy Leeor and Dan Potter, co-founders of Creative Works London. The company had previously worked with the network on its NFL graphics packages for 2014 New York and 2017 Houston Super Bowl live events.

“We were always confident we could deliver something that would stand out and make an impact,” says Potter. “Due to our long-term relationship and our own track record we were in a good position to influence the type of playback system used. We knew that disguise would deliver what FOX Sports’ Executive Vice President/Creative Director Gary Hartley had laid out as his overall vision for the project: to break out from the constraints of the stereotypical.” Jeremy added.

Potter explains that Creative Works “has been working with distributed, decentralised teams since 2015, and all of the creative work we were tasked with for Super Bowl LIV was done in the London studio. One of the first things we did was to set up a disguise Show File that we could use as an evolving ‘proof-of-concept’ tool to test our ideas. Once the main ideas were nailed down and agreed upon, we moved to a disguise workflow that allowed us very early on to share technical files with the state-side production team to test different approaches as they unfolded out of the process.”

He points to the ‘high bar’ that FOX Sports set for the look of its South Beach live sets.

“From the start we knew that it was going to be a challenge mapping our story-driven showpiece content across six screens with a combined pixel count of over 16K, but once we nailed the narrative, we quickly moved to animatics. We had the advantage of having worked on the main asset, Cleatus the Fox Robot – the network’s NFL brand ambassador – prior to the project’s kick-off. As we progressed through the project, we used disguise to pre-vis high-quality animatics as well as show how the storytelling would unfold across the program segments that FOX Sports carved out for us.

“As the project developed, we were able to consistently share pre-vis renders using ‘work-in-progress’ screen dimensions with the client so they were aligned with what we were developing as it emerged,” Potter notes. “This ability to preview the work in context massively reduced friction in the progressing through communicating and signing off on ideas.”

Gary Hartley with Fox Sports explains: “The Creative Works team led by Jeremy and Dan took the simple directive of “Give me something I’ve never seen at a Super Bowl” and brought it to life.” He continues, “not only was the creative a show-stopper but the combined expertise of Creative Works with the disguise technology we employed in our Super Bowl stage infrastructure, made the entire experience a pleasure. Their understanding of our unique brand allowed them to extend our reach into an entertainment footprint seamlessly.”

“What ultimately sold the scale of what we were creating was when we plugged in an Oculus headset and let disguise do its magic,” says Potter. “Being able to move around the set and look at the work from different vantage points is always useful. We’re no strangers to VR and have experimented with this kind of previs tool as far back as 2014. Having VR integrated into disguise is a real plus, not only for me being able to see the final product at scale, but also for the team to experience the work in context as it’s being built.”

disguise’s integration of Notch real-time graphics and dynamic content proved to be a further advantage to the project. “One part involved creating a countdown to the Super Bowl kick-off. We turned to a Notch-based approach that allowed us to create a solution to pull the time from the server and, using JavaScript, feed it into a Notch Block using pre-rendered animation and the UV Unpack,” Potter explains. “Mike Wilson, Technical Director and a key creative, who oversaw the implementation of this part of the project, did a great job of troubleshooting the development and identifying the correct solution.”

Potter gives a huge amount of credit to FOX Sports for trusting us to use the disguise system given that it was a first for that particular team.

“This trust was justified when we walked through the Super Bowl set with Gary Hartley and he referred to how our hand-over to the on-the-ground team went better than expected given the complexity of what we delivered,” he adds. “This was entirely due to us being able to build everything ahead of time in our studio weeks before the show went live. Sharing this knowledge early with the on-the-ground team via disguise Show Files gave them insight way ahead of time as to what we were delivering and enabled them to prepare their own production schedule. The lack of typical on-the-ground ‘chaos’ gave the client an understanding of the rationale behind the solution we had proposed.”

The LED video walls at the South Beach compound were top attention-getters in a city filled with attractions in the lead up to Super Bowl LIV. “You stopped the traffic on South Beach!” adds Gary Hartley.