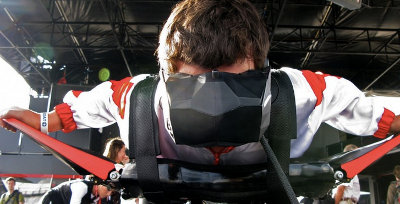 Facing up to virtual reality’s potential

Facebook’s F8 developer conference on March 25-26 was attended by more than 3,000 App developers, many of them no doubt planning applications for Oculus Rift.

Facebook’s £1.3billion purchase of Rift a year ago certainly turned a few heads, especially amongst those less clued-up souls who thought it was just a fun tool for games developers.

Zuckerberg’s explanation at the time of purchase that he views the hardware as “a new communication platform” and “a platform for many other experiences” will chime true with those of us in the commercial integration market, of course.

Fun as it might be, gaming wasn’t the only thing on our minds when the virtual reality (VR) headset first surfaced.

Zuckerberg also had this to say in March of last year, following the acquisition: “By feeling truly present, you can share unbounded spaces and experiences with the people in your life. Imagine enjoying a court side seat at a game, studying in a classroom of students and teachers all over the world or consulting with a doctor face-to-face.”

It’s easy to imagine how this ethos will inform how Rift will work a bolt-on to Facebook, and equally easy to visualise how integrators will be able to develop applications to best utilise Oculus Rift into installations; whether that be public-facing, entertainment-led experiences or more commercial, business-facing corporate experience centres or marketing suites.

Indeed, Andy Millns, co-founder and creative director at INITION, leading interactive tech consultants for integrators and agencies states: “The applications for the Rift and VR in general are endless; it’s as if we’ve been working with radio and someone’s just invented the TV.”

At F8, Facebook outlined how Oculus Rift will ultimately be used as a new means of communication for the social media platform, with opportunities for worldwide users to connect as if sitting together in the same room.

But there’s a way to go yet, as Facebook CTO Mike Schroepfer explained: “After thousands of demos we know we are just on the cusp, just getting there to get that sense of presence where for a moment your conscious brain is overruled by the subconscious that says, ‘You are not where you think you are.”

Although Facebook couldn’t (wouldn’t?) give a timeframe on when Oculus Rift headsets will be available, its newly announced ‘spherical video’ gives everyone a taste of what Rift will be able to do.

“It’s easy to visualise how integrators will be able to develop applications to best utilise Oculus Rift into installations; whether that be public-facing, entertainment-led experiences or more commercial, business-facing corporate experience centres or marketing suites”

Videos are shot with 24 interacting cameras, allowing viewers to “move around inside” the video and view from a variety of angles.

Experiential marketers will doubtless wonder why it’s taken Facebook so long to jump on board with this, with companies such as 360Globalnet providing 360-degree video for some time now; however, this is still an important marker for VR.

But Facebook developments aside, what else is new in the virtual world of Oculus Rift and the other VR competitors?

Available in scores of Best Buy stores in the States, the Gear VR Innovator edition is intended to work with Galaxy Note 4 and originally debuted online-only on the Samsung website “specifically to developers or early adopters of technology.” Integrators take note!

Interestingly, VR Gear may soon have a use outside of the developer market.

“But what of audio? Virtual reality surely deserves better than 2D sound?”

Next VR is working to develop real-time virtual reality displays of sporting events, starting with the NBA and NHL, and has also experimented with broadcasting Premier League matches.

The company’s service will operate via mobile devices and come pre-packaged on the Samsung Gear VR headset.

NextVR holds or is in the process of acquiring 19 different patents for the “capture, compression, broadcast quality transmission, and display of virtual reality content.”

These patents allow the company to transmit immersive, high-definition VR broadcasts over the internet in real time. Again, not a new concept (360Globalnet are ahead of the curve again, and the BBC produced an immersive news broadcast ‘experiment’ last June), but the confluence between VR headsets and 360-degree video presents interesting commercial opportunities for integrators.

But what of audio? Virtual reality surely deserves better than 2D sound?

Tech start-up Next Galaxy reckons it has the answer and is currently seeking funding for its Ceekars 4D headphones system.

This patented 4D sound technology is said to access a VR environment’s physical attributes, overlaying appropriate geometric data and haptic-induced feedback to create a ‘fully immersive and dynamic soundscape’ within the ‘phones. Gimmicky? Perhaps, but it’ll certainly add another layer of interactivity to the VR experience.

Away from innovative announcements, VR has already seen several practical uses by integrators and experiential agencies.

These include a Peugeot 308 experiential tour by Arcstream AV, surgical training enhancement (MOVEO Foundation), Holovis’ RideView simulation App, viewing of museum artefacts by Cross Design Group and INITION’s incredible virtual wingsuit for Nissan, which has to be seen to be believed.

In 2014 scientists at the Neukom Digital Arts Leadership and Innovation Lab in Computer Science (DALI) at Dartmouth College in Hanover, US, were reported to be working with Oculus Rift to offer long-haul astronauts a simulated trip back to Earth, to break the monotony of space-time.

They reckon that virtual trips back home will help astronauts to feel more at ease with the real thing.

The company has created a virtual tour of a Greek villa for Oculus Rift, which allows users to explore, inspecting virtual artifacts that are also on display in the museum, understanding how they would have looked in their original setting.

Showcasing in a closed public viewing from 10am-5pm on 16 April, Chronicles VR is showing it at the Museum Next Conference in Geneva, 19- 21 April.

VR headsets are certainly set to play an important part in interactive technology installations, whether that’s experiential, entertainment-based solutions, or more practical, corporate gigs – for instance, CastAR envisages a world in which its VR glasses are used for urban planning and virtual desktops. Indeed, the guys from Magic Leap recently released a fun, future-gazing video showing how workers are likely to be distracted in the office as the technology develops.

But Facebook remains the key focus for VR, and the company’s plans for Oculus Rift will doubtless inform how the wider world utilises this game-changing technology in the months and years to come.

Has Augmented Reality got a more practical future ahead of it?