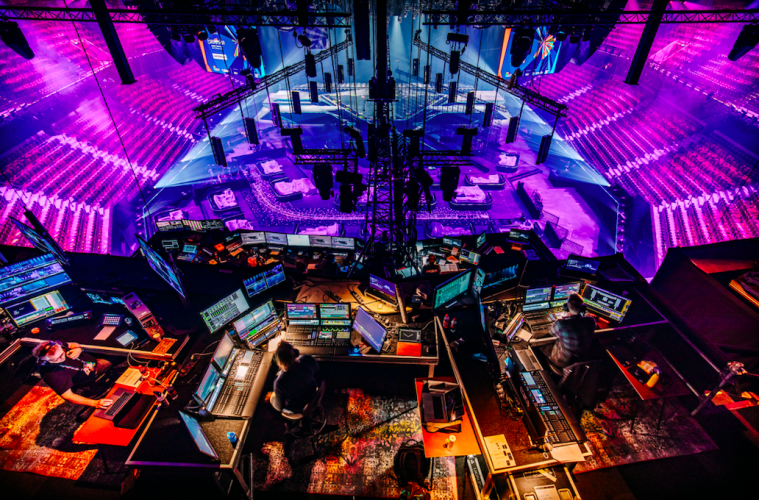 The 65th edition of the Eurovision Song Contest at Rotterdam’s Ahoy arena, marked the first major live event to take place in the Netherlands since the pandemic. With an incredible visual deployment, the event was powered by disguise.

The official technical supplier of the contest, Faber Audiovisuals, relied on a complement of disguise vx 4, gx 2c and 4x4pro media servers to power a total of 55 scenes on a giant LED video wall and floors, used across all 39 competing performances, the opening ceremony, the flag parade and all interval acts, such as the impressive ‘Power of Water’. The six-week production period was led by ESC Head of Production Erwin Rintjema and Head of Video Hand Cromheecke.

This year’s contest, with semi-finals on May 18th and 20th and grand final on May 22nd, played out to a COVID-tested live audience of 3,500 per show – contributing to a total of 183 million people watching the event worldwide. Faber’s Eurovision team included disguise workflow specialist Jo Pauly (of Visual Solutions) as media server operators for the show. The two share a long history of successful live projects powered by disguise, including Marco Borsato’s groundbreaking show at De Kuip Stadium in 2019.

Ben Augenbroe and Steve Ackein, ESC Project Managers for Faber says: “We chose disguise for reliability and stability. Because we had to run in full redundancy, disguise gave us the right solution. We did not have any issue on this complex production and the disguise 24/7 stand-by team supported us real quick when needed. This Eurovision Song Contest 2021 went smooth for Faber, as all went according to plan and all of our crew were outstanding. Our client, NPO/NOS/AVROTROS expressed they were delighted to have chosen Faber as their technical partner as we delivered as promised. All three live broadcasts went and looked fantastic!”

Preparations for Eurovision began in March 2021, where a pre-visualisation room was installed for the entire light and motion operator team and two media server operator positions: one on site in Amsterdam and one remote operator. Both worked the live show programming. A disguise 4x4pro was used to drive NDI feeds into the capture visualisation system.

During the show, the team used the disguise timeline to switch very quickly between pre-loaded Unreal and Notch content for these 55 distinct scenes and stage markers, without jeopardizing the look and feel of the show or losing content on screen.

A great deal of power was needed to drive the 52 x 12m LED video wall at the back of the main stage with giant revolving doors, and the A- and B-stage LED-floors. The system consisted of a fully redundant A and B set, each containing a dedicated gx 2c director server, two vx 4 and two gx 2c actors.

Additionally, another gx 2c ran Stage Precision software to take in motion data from the moving light trusses and all other moving elements in the venue. A disguise 4x4pro was connected to the lighting team’s Capture software for lighting design and visualisation, running in parallel with the video pre-vis.

“The show was mostly timecode-based and we automated the programming with external triggers from the OB van. For instance, at the end of a song we went to a country postcard [pre-recorded footage introducing each country], that triggered a track jump to the correct song. So we actually had it programmed quite smartly, with the possibility to manually react super fast when the need would occur” explains Jo Pauly.

The Faber team worked around the clock before the event to ensure that everything would run smoothly – and it did. The coordinated workflows and professionalism among the lighting, motion, fireworks and production crews created a positive atmosphere that contributed to the final outcome.

“The high level of expertise on this show was just stunning – it is what made this project such a success,” says Pauly.