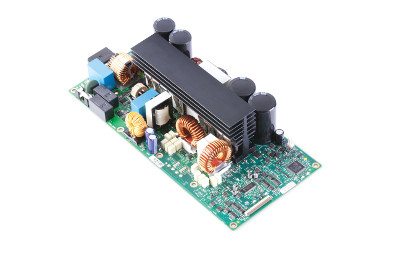 Meanwhile the set, lighting and video elements were designed by Squib.

The tour featured video content created by Adam Young and Anna Ginsburg which were programmed onto one of XL’s Catalyst media servers and projected on to seven stretched fabric circles or discs of varying sizes between 4- and 8-feet, fed by a pair of Barco projectors.

For the autumn/winter leg of the tour leading up to Earls Court, the show’s video elements were boosted with six composite mini-cams, chosen for their interesting grainy CCTV style footage.

New playback video content was added for two more songs for this final UK winter tour, activated by timecode as with the other video cues.

The projectors for the final leg of the tour were also swapped to two of XL’s fleet of new Barco 26Ks.

For Earls Court, a large arched projection screen – made by Hangman from a similar PVC mesh to that of the circles – was added behind the seven discs, together with another 50ft square screen upstage of that, also made from the same material, and framing the whole stage area.

Four more Barco 26K projectors were added to feed these two extra surfaces, so one of the three doubled-up pairs of projectors covered the seven discs, the second pair did the arched screen and the third pair dealt with projecting onto the back cloth.

A four HD IMAG PPU was also added for Earls Court, with the mix directed by Charlie Wood using a Panasonic HS450 switcher.

The Sony HXC-100 cameras were positioned at FOH, two in the pit on track-and-dolly and a hand-held onstage, with feeds beamed onto the arched screen and the discs as well as two 16-x 9ft side screens.

These side screens were fed by two more Barco 26K machines complete with hot backups.

Via a third Catalyst media server at FOH, Squib had control of the intensity of all the projectors.

All the video mapping was co-ordinated by Phil Mead, Squib’s ‘go-to video genius’ who engineered and tech’d for throughout tour at Squib’s’ request. Joining them for Earls Court and to engineer Charlie’s IMAG system was XL’s Mark Eisen.

“Squib had an extremely clear and thought-out vision of the look and feel he wanted to create using video, and he produced something properly refreshing and different.”