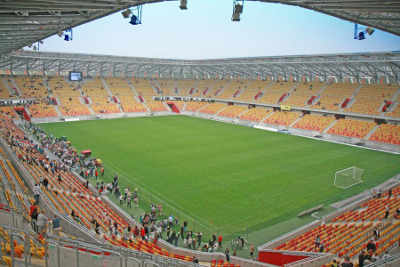 The client specified that the new combined sound reinforcement and public address system needed to be “powerful, reliable and capable of being supervised and controlled remotely”.

A further requirement was the option of data transfer via the widely used Dante audio network.

“It was a premiere for us to install Dynacord equipment with such capabilities”, recalls Zbigniew Kaczmarczyk, vice production director of Centrum Informatyki ZETO S.A.

“However, with Tommex’s positive experiences during previous installations, we were more than confident to rely on Dynacord equipment.”

Using EASE software, the installed system was designed not only for the reproduction of music and speech but also for announcements by the stadium commentator and uniformed personnel.

ZETO opted for a Promatrix system to form the centre of the install. A DPM 8016 digital matrix manager together with a DPC 8015 paging console allows police and the fire brigade to easily make announcements and overrule other processes of the system.

Also connected to the main rack are a CMS 2200 mixing console and the system’s sub-racks.

For the stadium’s two zones, two sub-racks were installed, respectively.

Linked together to allow signal distribution and processing, each sub-rack consists of a Dynacord P 64 controller and five DSA 8410 multi-channel power amplifiers, with one amp in each case serving as a redundancy unit.

As a back up, each of the four amplifier racks also accommodates a 19-in/2U DCS 400 for easy exchange of amplifier inputs and outputs.

A triply redundant fibre-optic ring interconnects the racks. An RCM 810 module in the amps provides for integration into IRIS-Net network to allow the entire installation to be supervised and controlled remotely using the graphic user interface of IRIS-Net software.

To keep spectators and personnel safe at all times, ZETO additionally installed a Praesideo evacuation solution from Bosch which overrides the sound reinforcement and public address system in case of an emergency.

“The stadium in Bialystok is our biggest Dante installation so far,” enthuses Zbigniew.

“With two turbo ring networks and five P 64 controllers we have absolute multi-functionality. We and our client are totally satisfied. What more could we ask?”