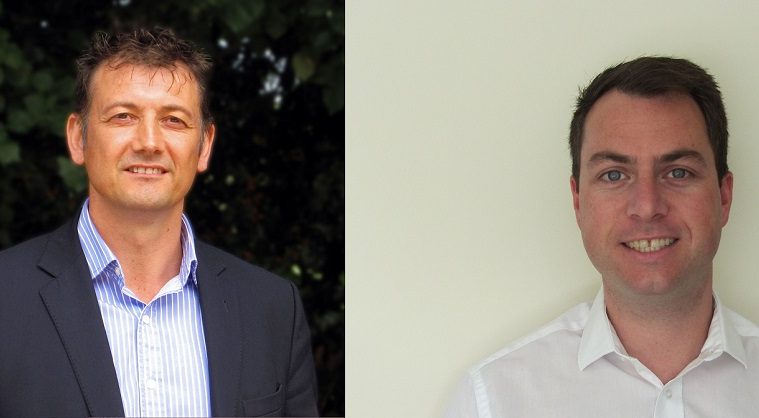 Crestron has been on a promotion spree, with Phil Breitschadel (left), the company’s former UK sales manager, taking up to the position of European VP of sales. Matthew Buck (right) will replace him as regional sales manager.

The promotion was effective as of February 1, with it being the second promotion for Phil since he started working at Crestron. He has held both the UK sales manager and regional director – UK and Ireland roles.

Under his tenure, the company doubled its business both in the commercial and residential markets.

In his new role, Phil will become a key member of the senior management team and will be responsible for over 70 sales personnel including all regional directors and managers. He will primarily be responsible for spearheading the company’s growth plans to double in size again over the next five years.

Commenting on his promotion, Phil says: “This is an amazing opportunity to lead our highly skilled and talented sales teams. I am looking forward to the challenges and opportunities that lie ahead. The continued growth of our business relies on providing our existing customer base with the same level of dedication and professionalism that we are renowned for, whilst at the same time looking into new market opportunities such as defence, healthcare and government.”

As advocate of using technology to reduce costs and improve productivity, Phil will be based in the UK and will be using Crestron’s own unified collaboration solution – Crestron RL2 – to keep in contact with his colleagues in EMEA.

“At Crestron I believe that we employ the very best people in the industry and I am always delighted when our people are given the opportunity to evolve with the company. Due to his exceptional managerial skills, Phil has a proven track record of success and was the natural choice for the European VP of Sales.” Robin van Meeuwen, CEO Crestron EMEA added.

“This new role is a crucial step for our company to evolve in a stronger managed business, never losing sight of our customer needs and expectations.”

Matthew Buck has taken over Phil’s old responsibilities following his promotion. He is now regional sales manager – UK and Ireland and will be responsible for sales in both the commercial and residential sectors.

He has over 10 years’ experience in the AV industry, beginning his career in the industry with Polar Audio in the role of business development manager.

He joined Crestron in 2011 as a commercial account manager where he grew sales by 50% year on year over the next three years. In recognition of his sales achievements, he was promoted to sales manager – commercial division in July last year, heading up a team of 5 account managers.

Commenting on his promotion, Matthew says “As regional sales manager – UK and Ireland, I will be responsible for sales in both the commercial and residential markets at a time when the potential for growth is unlimited. I am excited to take on my new role and work with my team as we strive to double the size of the company over the next five years.”

European VP of sales Phil Breitschadel comments that “Matthew has made an amazing contribution to Crestron during the five years he has been with the company and his promotion is well deserved. He has a deep knowledge of the industry, an impressive track record in achieving sales targets and excellent leadership skills – all of which are critical to the success of his new role.

“As we continue to innovate and bring significant new products to market, we are creating the ideal opportunity for considerable growth in our EMEA markets and I look forward to working with Matt to achieve our strategic goals.”