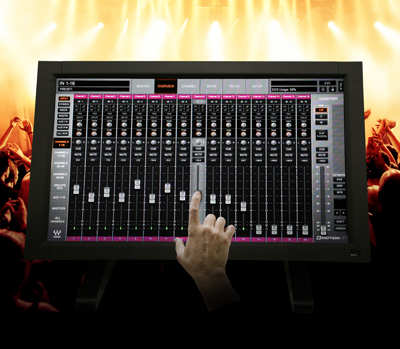 Crest Audio To Debut Tactus In UK At Plasa Leeds

Crest Audio, a division of Peavey Commercial Audio, will be giving its Tactus digital mixing system its UK debut at Plasa Leeds.

The system’s modular approach means it can be applied to a wide variety of applications including touring, corporate events, houses of worship, performing arts venues and live music concerts.

The Tactus system consists of both hardware and software components incorporating the Waves eMotion LV1 software.

Utilising Waves Soundgrid audio network protocol, the Crest Audio Tactus systems are comprised of three hardware units: the Tactus.FOH, Tactus.Stage and Tactus.Control, with each addressing the input and output, monitoring and control plus synchronisation requirements of audio signals at the stage and front of house points.

The modular capability of the Tactus, which interconnects via standard Gigabit Ethernet cabling and an internal Gigabit switch, allows multiple configurations in a range of channel counts to best suit each application.

An integrated gigabit Ethernet switch allows for easy networking. Users also benefit from the option of combining Tactus.Stage I/O interfaces for a total of 64 stereo inputs by 32 stereo outputs.

Meanwhile, Tactus.Control is a tactile motorised fader board complimenting the eMotion LV1 touch screen by providing moving faders, lighted buttons and knobs for the most commonly used functions.

The Waves eMotion LV1 mixer application runs on a Windows PC or Mac with one, two or three multi-touch screens.

One or two Tactus hardware surfaces with moving faders can be added for tactile control if desired. Multiple Tactus.Control panels can be used to create a flexible live sound mixing system.

“We are very excited about this new digital mixing system from Crest and Plasa’s trade expo in Leeds is a great opportunity for us to show it to the UK market for the first time,” comments James Kennedy, operations manager for Peavey Commercial Audio EMEA.

“Working closely with Waves, we believe that Tactus offers a professional sound mixing platform that is fitting for today’s digital demands, with features that will benefit all users, from the workplace to a live music venue. We’ve made connectivity and networking simple, with USB, Ethernet and MIDI all available. What’s more, Tactus is flexible to your application needs, with In/Out components, processing, touch screens and controllers all being catered for to allow easy set-up customization. Above all, of course, users benefit from the trusted Crest reputation and the sound quality that comes from being part of the Peavey Commercial Audio family.”

Plasa North runs from May 10-11 at Royal Armouries, Leeds and visitors can get hands on with the new Tactus system at the Midwich Group stand at R-C10.