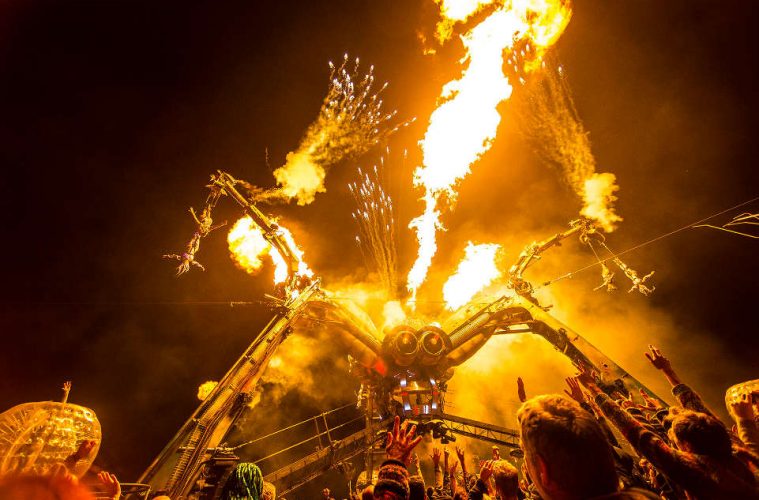 Selling out in just 25 minutes, this year 135,000 people refreshed their tabs enough times to secure their place at the largest greenfield festival in the world; Glastonbury.

Taking place in Somerset, the five-day festival has grown into one of the biggest (and priciest) music festivals in the world, having commenced in 1970 the day after Jimi Hendrix died, costing its 1,500 ticket holders just £1 each (free milk from the farm was included).

Fast forward to 2015 and the festival is more popular than ever, attracting huge and sometimes controversial headline acts (yes you Kanye – or should we address you as ‘the biggest living rock star on the planet’ from now on?), a smattering of welly-weilding celebrities and more stages and entertainment offerings than ever before.

The festival has certainly gone from strength to strength and with it so have its technical requirements.

Providing the lighting and visual equipment to a number of key areas and stages this year was West London-based lighting and video rental specialist, Colour Sound Experiment.

Headed up by Andy Melleney, the crew of 25 supplied the touring lighting rig for Arcadia, Block 9, The Common, The Glade, as well as for Friday night’s Other Stage headliners Rudimental, on top of kitting out over 20 major bars around the vast site with practical and effects lighting.

“We are absolutely very proud to have been involved,” Colour Sound’s Haydn Cruickshank tells CIE a few days after the festival. “It is still the most globally iconic festival. We have worked on Glastonbury since 1992 and have seen it evolve a great deal in that time and stay a market leader in what has become a hugely competitive business. Our roots are as a festival supply company and although we now supply over 50 festivals a year, Glastonbury has always been at the heart of it.”

“Arcadia Spectacular’s Spider is a very unique structure; there are huge technical challenges ranging from waterproofing lighting fixtures, to access, to working around the performer rehearsals and not disrupting the aesthetics of the show”

West Midlands-based Central Presentations Ltd (CPL) provided Panasonic projection onto the legs of the giant spider, designing the projection system together with Video Illusions, comprising six Panasonic PT-DZ 21K projectors, each beaming onto the front and back of each spider leg.

The video footage was mapped on to the legs using an AI media server; the cues for the Metamorphosis show were all triggered by timecode generated by the overall show control system.

The projectors were rigged in weatherproof hides on six platforms placed around the Arcadia arena approximately 40m away from the spider structure.

Not stopping there, four Robe Pointes were attached to the spider’s three legs with another 10 units deployed on its belly, underneath the DJ booth.

In fact, over 600 Robe moving lights were deployed on a multiplicity of stages site-wide. Locally based Enlightened Lighting from Bath, took care of lighting a number of areas all using a backbone of Robe kit.

Over 70 Dragon LED PARs were also used to light various scenic elements of this unusual structure, with Clay Paky Alpha Beam 1500s making up the piercing eyes, of which there were three sets for the full 360 effect.

Four Atomic strobes adorned each leg and three on the underside, all controlled via an Avo Sapphire touch console running in conjunction with the overall Arcadia show control system dealing with hydraulics, winches, fire, pyro and lightening.

“Arcadia Spectacular’s Spider is a very unique structure,” says Haydn. “There are huge technical challenges ranging from waterproofing lighting fixtures, to access, to working around the performer rehearsals and not disrupting the aesthetics of the show. We’ve worked with Arcadia’s construction and production team for several years now and they are very accommodating in making the lighting work.”

With so many stages and sections, how does Colour Sound Experiments manage the project?

“Each area we light has it’s own crew and chief lighting designer,” Haydn explains. “So it’s managed as several separate projects. Trucking and a few other services we look after centrally, as it’s more efficient. Doing the same areas year on year also makes the project more manageable.”

Lighting designer Alan King of Rockin’ Horse ensured that all three main scenic sculptures that made up the Block 9 hood received careful and considered lighting and visual treatments. This was overseen for Colour Sound by Toby Lovegrove.

The derelict post-apocalyptic industrial Genosis power plant – a 50ft high sculpture was lit with 17 Robe Pointes, 16 LEDWash 600s and nine Atomic strobes that were secreted in the pods and on the floor, hidden by foliage.

The pod windows were illuminated by around 30 Chauvet Colorband Pix LED battens. Alan was the main lighting operator for Genosys, utilising a ChamSys MQ300.

“The size and scale of the place still make it unique among festivals which makes getting around the site very time consuming,” Haydn admits. “Another thing that stands out is the way in which each field/area is managed separately in terms of production.”

“We supplied three other festivals at the same time as Glastonbury, as well as three the week before and four the week after. This time of year pushes us to the limit; lots of overtime for the warehouse staff!”

“Most of what we did this year was as a repeat customer from previous years,” Haydn continues. “The Common was a new area we lit this year and we were brought in by lighting design company Rockin Horse to supply that.”

With all of these different zones and with each event being broadcast, the pressure was on in terms of delivering the very best, but as Haydn comments: “To be honest it always is.

“Every event we do can be the most important event of the year to our customers (and their customers). Glastonbury is a bit of a showcase as so many people are there but we are very lucky to be involved in some of the more creative areas there; if what we are lighting looks amazing it makes us look good – Block 9 and Arcadia always get particularly good reviews,” he notes.

“Technically, this project is pretty similar to other festivals,” he reasons. “Our main challenge over the summer is about logistics and bouncing from one festival to the next whilst keeping the equipment clean and in working order.”

Haydn is pleased to report that despite the challenges and the size of the undertaking, all the equipment performed very well. “Most of our job happens in the warehouse; cleaning, repairing and preparing equipment before it goes out.”

So what is it like the days prior to supplying such a large inventory of gear?

“The supply part is very hectic; all of our equipment comes back from festivals the previous week and has be turned around and sent out very quickly. We supplied three other festivals at the same time as Glastonbury, as well as three the week before and four the week after. This time of year pushes us to the limit; lots of overtime for the warehouse staff! The set-up on site is always fairly hard work, but all went pretty well and each area was ready on schedule.”

All in all, the project has been deemed a huge success by the team, so will Colour Sound Experiment be back for Glastonbury 2016? “Definitely,” Haydn grins. “Being involved in some of the edgier more off-beat and imaginative elements of the Festival is always exciting. The event continues to be loved and appreciated worldwide for offering the most diverse and interesting performance experiences for so many people and we are very proud to be part of it.”

Rock Or Bust: On The Road With AC/DC’s Lighting Designer