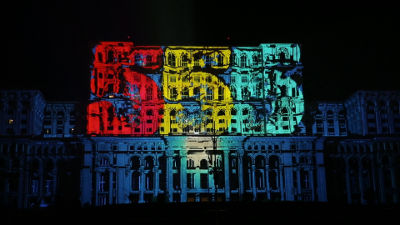 A total of 104 Panasonic projectors were recently put to use to create one of the world’s largest architectural video mapping shows to commemorate the 555th anniversary of Bucharest.

The iMapp Bucharest 555 years anniversary event saw the 270m wide, 23.000m2 facade of the Bucharest Parliament Palace transformed into a giant outdoor theatre for the celebrations, which mark 555 years since the first documented mention of the Romanian capital.

“We chose the DZ21K mostly because of its size, and being so robust we were able to make stacks with lots of projectors,” explains Adrian Pochiscan, technical director of 360 Revolution, the company that produced the show.

“We liked its resolution, its remote control capabilities from a distance, its stability and the fact that the projector is so energy efficient. If we had chosen another projector, we would have had to build a small hydropower plant to run the show.”

“We are incredibly pleased that Panasonic projectors were chosen to be a part of the celebrations,’ adds Panasonic European product marketing manager, Hartmut Kulessa.

“It successfully showcased all of the strengths of our projectors from high brightness and colour depth to the versatility in size and shape of projection offered through the use of multiple edge blended projectors.”