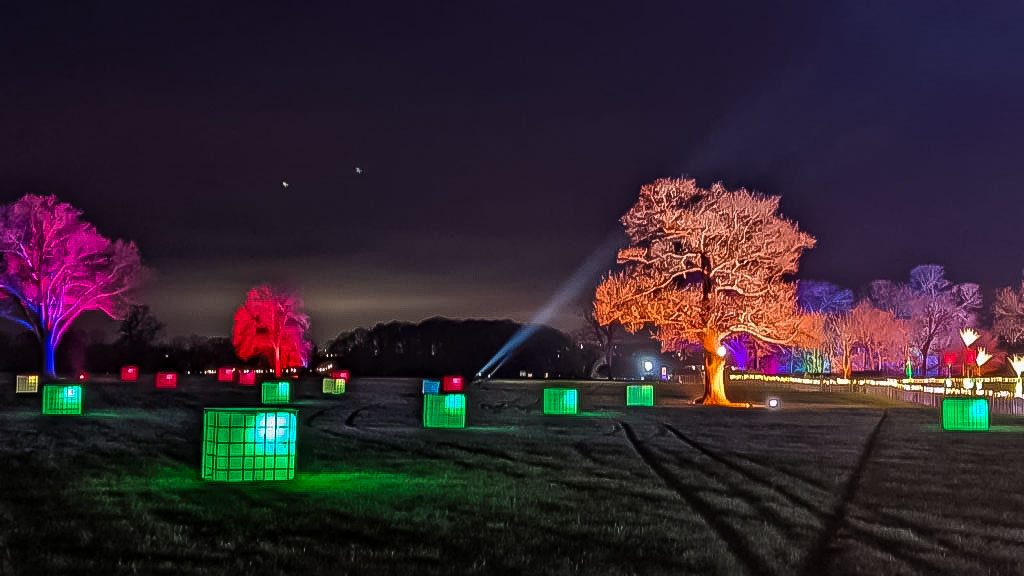 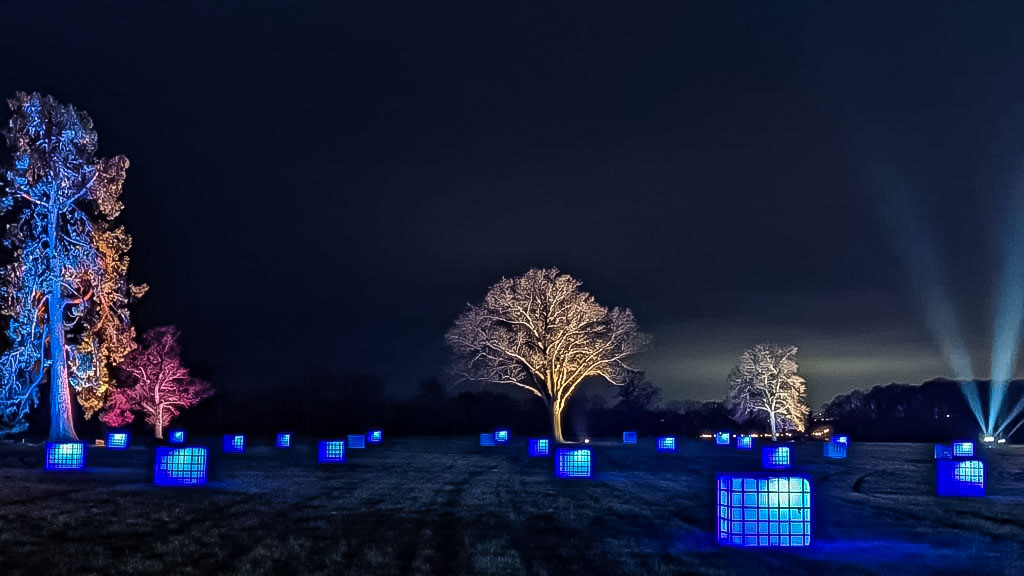 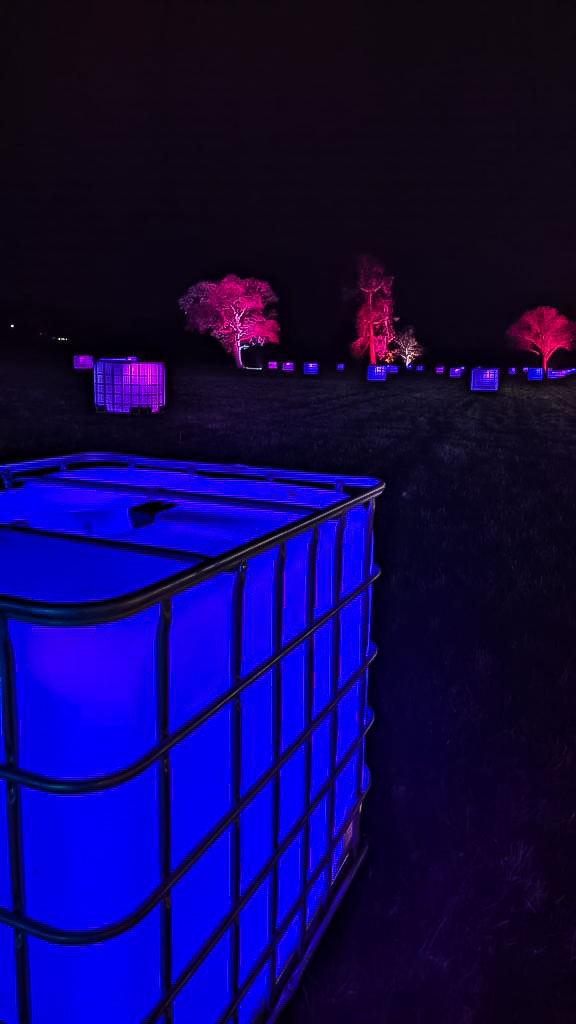 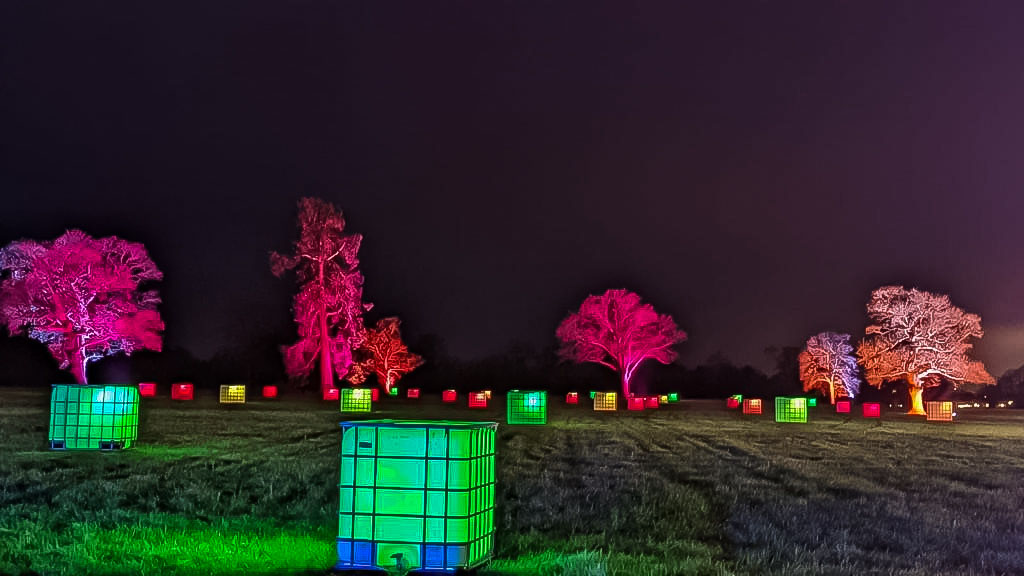 Lighting designer Nick Jevons was asked to add lighting magic for the brand-new event concept at this site after being invited onboard by event producer Matt Bates. He discussed the initial ideas that were already germinating with Bolesworth’s live events team plus some of the locations they had in mind, and together with his own input, eight of these were developed as highlights for the 1.5-mile-long trail.

A major section of the trail was a large 400 x 300 metre lawn space in front of the Castle which needed dramatic hi-impact illumination, so Nick suggested utilising 48 x IBC tanks with internal light sources. The IBCs – intermediate bulk containers – are industrial-grade containers engineered for the mass handling, transport and storage of liquids, semi-solids, pastes, or solids, and are popular on festivals and live event sites for ballast or weighting applications.

“The Cube Field” installation at Bolesworth was the first time Nick had used PixelBricks for an event, but he already had these very handy and robust new Astera fixtures in mind when shaping this piece of light art in his head.

“Obviously, I needed something fully battery powered and ultimately deployable as running power or data cabling across the area would have been completely impractical,” he explains, and sure enough, after the first tests, the PixelBrick proved itself an absolutely ideal choice.

The 48 x fixtures were fitted with dome diffuser accessories – one of Astera’s ingenious Accessory Pack items – and emitted a fantastic smooth light output that filled with whole IBC evenly, making them glow in the dark producing “the exact effects I envisioned,” stated Nick, delighted with the results.

Nick programmed the 48 x PixelBricks via his Avolites console using one transmitter, an Astera receiver and a DMX repeater which was sitting in the middle of the field, and these produced a wide variety of funky, fluid, and different effects and explosions of colour interacting with people as they ambled around the trail.

The 48 x PixelBricks were purchased specially for the project by Hampshire-based lighting rental specialist Liteup, which supplied these, together with all the other lighting equipment, power distro and crew for the Bolesworth project.

Liteup’s Marc Callaghan comments,“We already stocked Titan Tubes so the decision to add more Astera products to our inventory was an easy one. The reliability of the wireless control and the battery life make the product ultimately usable, not to mention the colours and brightness which we love!  Adding the accessory packs alongside has made the PixelBrick into an extremely versatile lighting fixture for a variety of shows.”

Nick uses other Astera products like Titan Tubes regularly in his work and knowing the reliability and scope of the wireless technology, was confident to run all these PixelBricks off the single transmitter.

“The Cube Field” was one of eight diverse installations ranging in size and complexity making up ‘Bolesworth Christmas’ which also incorporated other art works like sculptures and a Christmas market, and utilised other stunning environmental elements of the extensive grounds including woodland.

Challenges included dealing with some very inclement weather – the set-up and period initially planned as the first week was affected by two serious storms (Arwen and Barra) that hit the UK at this time – but everything still went ahead. “The PixelBricks were rock solid throughout,” noted Nick, adding that working outdoors in the winter was a big learning curve for all involved but at the end of the day there was “nothing that could not be solved by a good cup of tea and a think!!”

He adds that it was “excellent” collaborating with a client like Bolesworth, prepared to push the production values and create a high-quality visitor experience in spite of galvanising circumstances!

The festive event was a massive hit with the public, running right up until Christmas Eve.

With COVID uncertainty still affecting live events across much of the world, outdoor illuminated trails have surged in popularity as a new, safe, and entertaining way of providing some theatrical magic highlighting special seasons and themes, and we are sure to see a lot more Astera products used in this way.