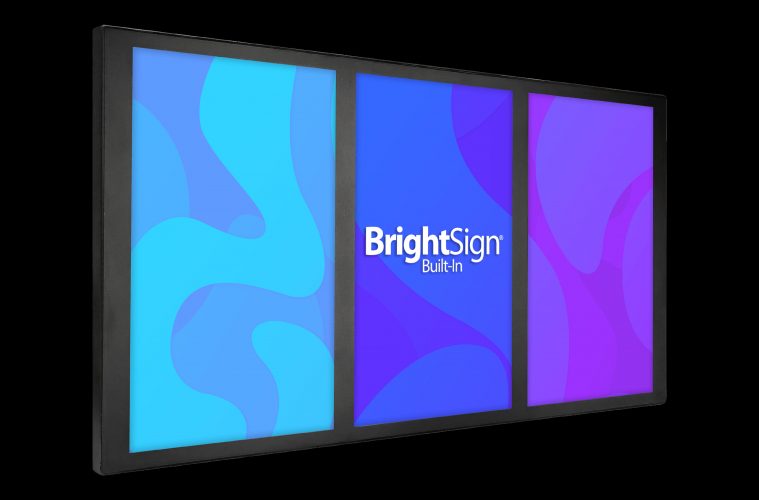 BrightSign has announced its collaboration with Bluefin International, Inc. to deliver a pair of new video wall solutions with integrated digital signage capabilities. The BrightSign Built-In Multi-Screen Displays come in two configurations – a 13.3in 3×1 display, and a 15.6in 3×1 display.

“Traditional video walls can be very effective for businesses to increase visibility, but they often require significant up-front investment and cost more over time due to increased energy consumption,” says Randy Guy, CEO at Bluefin. “Our displays are very efficient and come equipped with BrightSign’s highly reliable media player capabilities already on board for a great solution that works right out of the box.”

Each of the new Bluefin solutions comes in a 3×1 configuration. The 13.3in displays are stacked vertically to create a narrow column that can be installed in either landscape or portrait orientation, while the 15.6in displays are stacked laterally for an aspect ratio similar to a traditional display in landscape orientation. Both solutions are powered by a single HS144 module, BrightSign’s Built-In SoC Series 4 media player that supports 4Kp60 video and features a low-profile form factor for easy integration into OEM commercial products.

“Bluefin has done a great job of integrating our Built-In SoC solution into two configurations that are versatile enough to be used in virtually any business setting,” says Jeff Hastings, BrightSign’s CEO. “Our latest collaboration with Bluefin is another great proof-point of the collective value we bring with this best-of-breed solution for a variety of video wall applications.”

BrightSign’s HS144 module is powerful enough to power all three displays with 1080p content, maximizing resolution to create eye-catching screen layouts. BrightSign makes it possible to synchronize playback across all three displays, with the ability to create zones within each display to maximize the variety of content that can be displayed simultaneously.