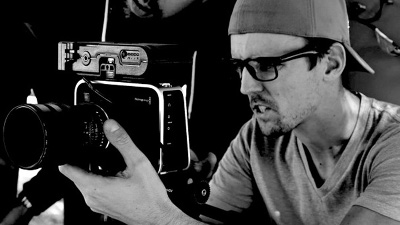 For the last several years, Doritos has run its ‘Crash the Super Bowl’ contest, an online commercial competition in which consumers are invited to create their own Doritos ads.

In fact, the 2015 competition ends on January 28th. Entries are voted on by viewers and each year at least one fan-made commercial is guaranteed to air during the Super Bowl.

Looking back on 2014’s winning commercial Time Machine, this was shot by director Ryan Thomas Andersen on a Blackmagic Cinema Camera and coloured on DaVinci Resolve.

In the winning ad of 2014, a small child outsmarts a grown man in a scheme to procure the man’s bag of Doritos.

The man agrees to take a ride in the child’s homemade cardboard box time machine, which runs on Doritos, and in the end the man thinks the time machine has worked.

“This was my fourth attempt at the Doritos contest,” Ryan reflects. “Every year we would get positive feedback and I kept studying the formula for what makes a great spot and what types of spots win. I got the idea for time machine this year and after a lot of planning, I decided I needed to go for it full force.”

The commercial was produced by Raj Suri, and the two shot the ad at the home of one of Ryan’s family members in Arizona.

Ryan used a Blackmagic Cinema Camera EF and shot the ad in 2.5K RAW. He then did colour correction using DaVinci Resolve.

“I chose the Blackmagic Cinema Camera because it looks like film,” Ryan explains. “It gives off such an incredibly organic look. I love that I can get a look that is not over produced straight out of the camera. Personally, this camera is a true appendage to my creative body and my vision. This camera truly complements my style and I used it 100% to my advantage.”

After shooting all of the footage in RAW, Ryan converted it to a ProRes Proxy, and then when the edit was locked, he imported the XML files into DaVinci Resolve for colour grading.

“I went with a simple, light grade as I wanted it to be as natural looking as possible,” says Ryan. “The camera helped me pull back a lot of highlights because I shot in RAW. I don’t have a lot of professional gear, so I was working

with minimal equipment. The camera allowed me to get the professional image I needed.

“DaVinci Resolve helped me really dial in my colour, blacks and highlights, which is a bit more difficult to do when using other colour correction software. In my opinion, DaVinci Resolve is a more user friendly program than what I have worked with in the past.”

“The camera is so incredibly easy to use, and the colour science is unmatched by any other product out there. I plan to shoot a feature length film this year with a Blackmagic camera and couldn’t be more excited, as I love everything about its beautiful images.”

Watch this year’s competition entries in the slideshow to the right and vote for your favourite.