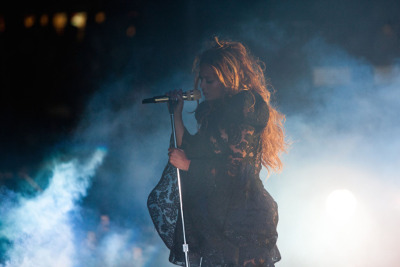 Beyoncé And Jay Z Take Sennheiser Digital 9000 On The Run

Beyoncé and Jay Z recently concluded their On The Run tour, using Sennheiser’s Digital 9000 wireless microphone system throughout. The system was purchased specifically for the tour by Eighth Day Sound Systems at the recommendation of FOH engineer Stephen Curtin and monitor engineer James Berry.

The tour combined band members from Beyoncé and Jay Z’s separate tours and featured two stages, a huge video wall and an elaborate lighting design – making it a sufficiently challenging environment from an RF perspective.

“We are on tour with two of the biggest artists in the world,” says James. “This can be challenging for us as engineers, so we have to remain at the edge of technology to stay ahead. The Sennheiser Digital 9000 system was a perfect solution from both a sonic and reliability standpoint.

“For us, it all come down to audio quality,” he adds. “We did A/B tests between the Digital 9000 and our previous system before it ever saw an artist. When the artists came in for rehearsal, I handed them a Digital 9000 and we never looked back.”

“My first impression of the Digital 9000 was during the rehearsals with Beyoncé – as soon as she sang, we instantly knew that it was going to work,” comments Stephen. “Normally, I have to do a lot of balancing and EQing for the environment I am working in, but with the Digital 9000, the pure, natural tone came ringing through – nothing was getting lost in the transmission and I hardly had to make any corrections.”

“The lack of compression made everything sound so smooth,” says James about Jay Z’s vocals. “I will never use another microphone on a rapper or on another hip hop gig.”

“If we are making it easier for the engineers to do their jobs and increasing the quality of the audio, then it is a good decision for everyone,” concurs Jason Kirschnick, chief technology officer of Eighth Day Sound. “The Digital 9000 sounds remarkable and is very ergonomic.”

Jimmy Corbin, monitor engineer for the band, comments that it is very seldom that a single piece of equipment can have such a big impact on the overall quality of a massive touring system – but that this is precisely what happened with the Digital 9000.

“We noticed there was a significant difference in what you could do with it,” he explains. “With many other microphones, you have to be ‘defensive’ from an EQ perspective, counteracting the problems that routinely arise. But with the Digital 9000 and the MD 9235 dynamic cardioid capsule which has outstanding rejection qualities, you could actually be more creative and ‘offensive’ in how you EQ. When I first heard this microphone, I knew it was going to make my day easier.”

Since the handheld and bodypack transmits digitally, it does not employ any companding circuitry or pre-emphasis/de-emphasis found on typical analogue systems.

“Without the companding, I can immediately realise a fuller and more dynamic sound,” says Stephen. “For a vocalist like Beyoncé, this is a big help because it means I don’t have to search for frequencies that were lost during transmission – they are all there.”

As RF technician for the ‘On The Run’ tour, Clinton Reynolds faced a different set of issues: “For me, the RF landscape changes with every city and every venue. We are constantly working around digital television and other challenges and the RF challenges are getting harder, not easier. The scan feature on the Digital 9000 actually takes what my antennas are seeing at any given moment and shows me the lowest noise floor for that particular bandwidth.

“I can always use other scanners for finding frequencies, but none of them show me what the antennas are seeing like the Digital 9000. This is very useful because an antenna might be in close proximity to a lighting rig and be prone to more noise. A traditional scanner won‘t show you this.“