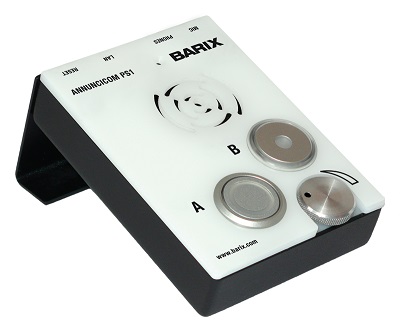 Barix is gearing up for InfoComm 2015 in Orlando, Florida, with the company announcing that it has plans to show off the next generation of its Simple Paging solution for fixed and mobile paging over the IP network.

Simple Paging produces live announcements from a desk or on the move via an App, with the goal of giving end users an intelligible and flexible paging and communications tool.

At InfoComm, Barix is planning to demonstrate integration with emergency notification and background audio systems.

This should, in theory, add value to systems integrators who wish to marry multiple IP applications over a common networked platform.

While configurable emergency notification and background music sockets will be the headline features of the new Simple Paging solution, Barix will also add a pre-gong chime to its master paging devices.

The goal of this is to capture the audience’s attention prior to an important page of security announcement.

Barix says that its system has been designed to be as simple to install as possible, allowing for deployment in both new and existing buildings.

The company claims that multiple paging groups can be set up in as little as 10 minutes, without the need for in-depth IT knowledge.

Utilising Barix’s solutions, IP voice paging announcements can be made from paging stations, tablets and smartphones without further configuration once power, the network and loudspeakers are connected.

Barix will demonstrate its updated Simple Paging solution at Booth 5059 at InfoComm, which is scheduled to take place June 17 to June 19.

New Communication And Connectivity Solutions From Clear-Com At ISE