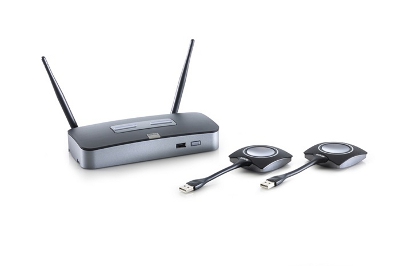 Barco has released an update to its ClickShare wireless presentation system, bringing with it a whole host of new features.

Now up to four people can share content on the screen at the same time, thanks to the new auto-layout function.

On the CSM-1 this feature is limited to just two people, due to the limit of two buttons, but CSC-1 users can take advantage of all four.

Barco has also recognised the widespread adoption of BYOD, allowing users to mirror the screens of Apple devices using the CSC-1 Base Units.

That means if users have an iPad or iPhone, they can now share images, videos and data directly to the screen without the need to use a third party peripheral or program.

This extends the current BYOD functionality that has been available for Samsung Galaxy owners using ClickShare that has been present to date.

The final two features could make a big difference in any office, with Barco now giving users the option to disable the wireless access point of the ClickShare Base Units.

This means that the ClickShare Buttons, or mobile devices using the ClickShare apps, can directly connect to the base unit via a corporate wireless network.

On top of that Barco has added a signal strength modulation function, which limits the reach of the ClickShare base unit.

That means users can now have more than one ClickShare unit without them interfering with each other. It can also prevent users from connecting to ClickShare from outside the room.
The firmware update is available now and can be downloaded from the Barco website.

Empire Enlists The Help Of Barco To Upgrade Theatres

Where Is Barco Headed Next?