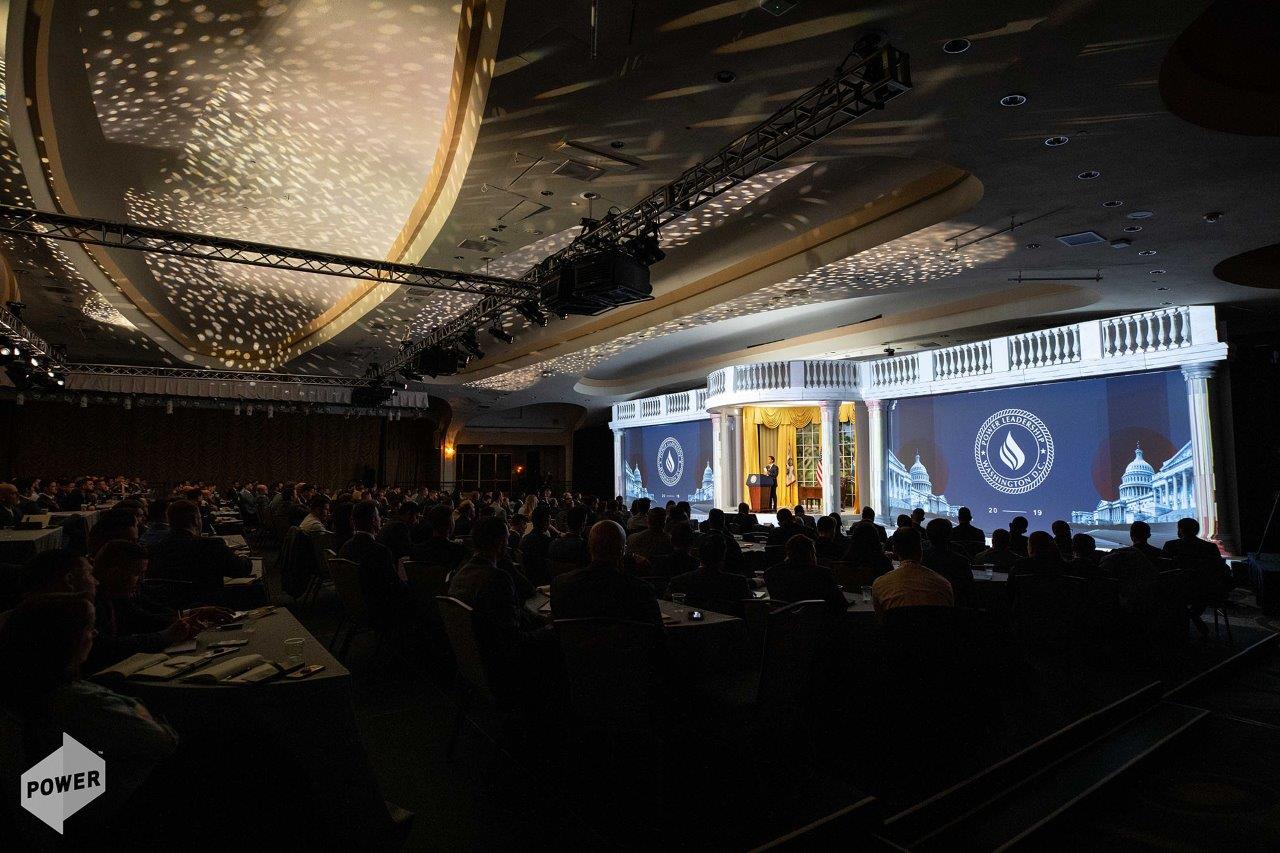 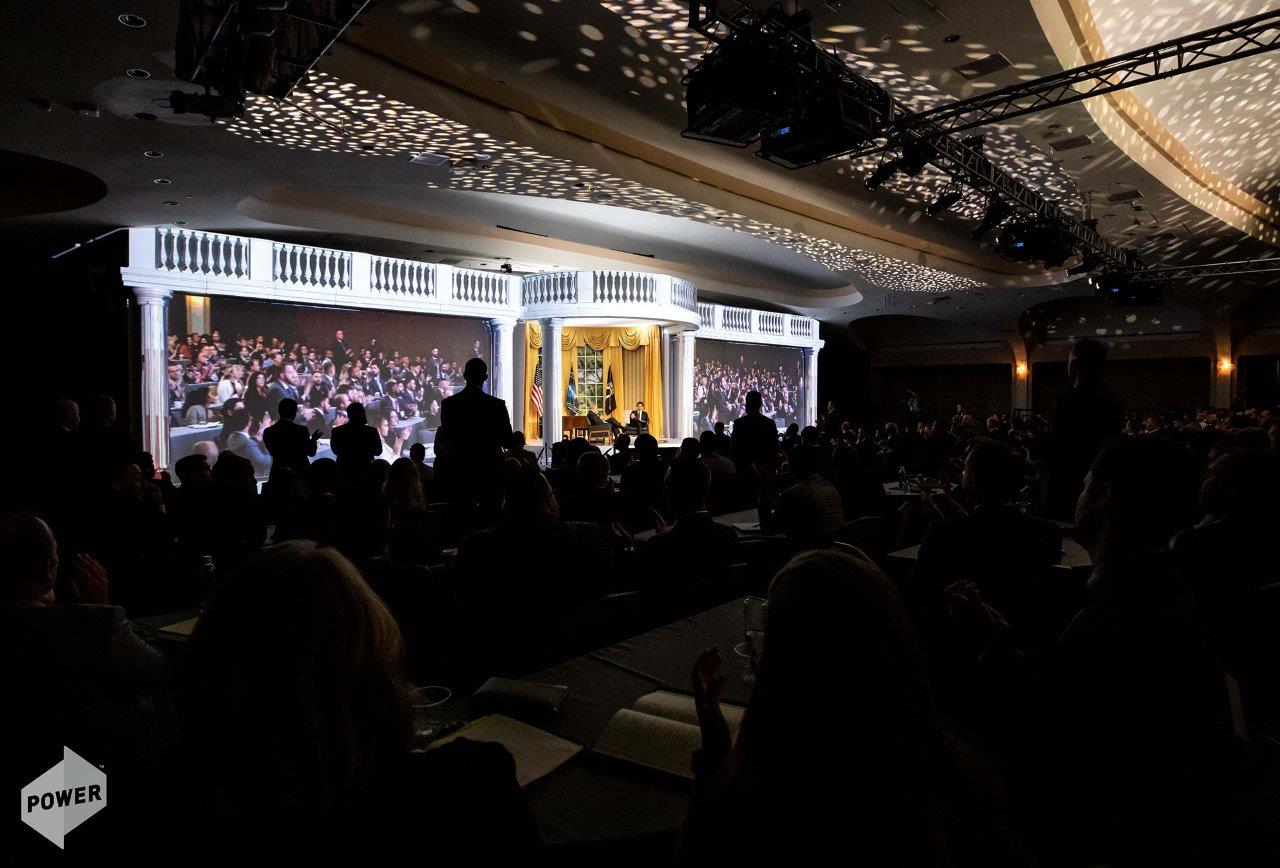 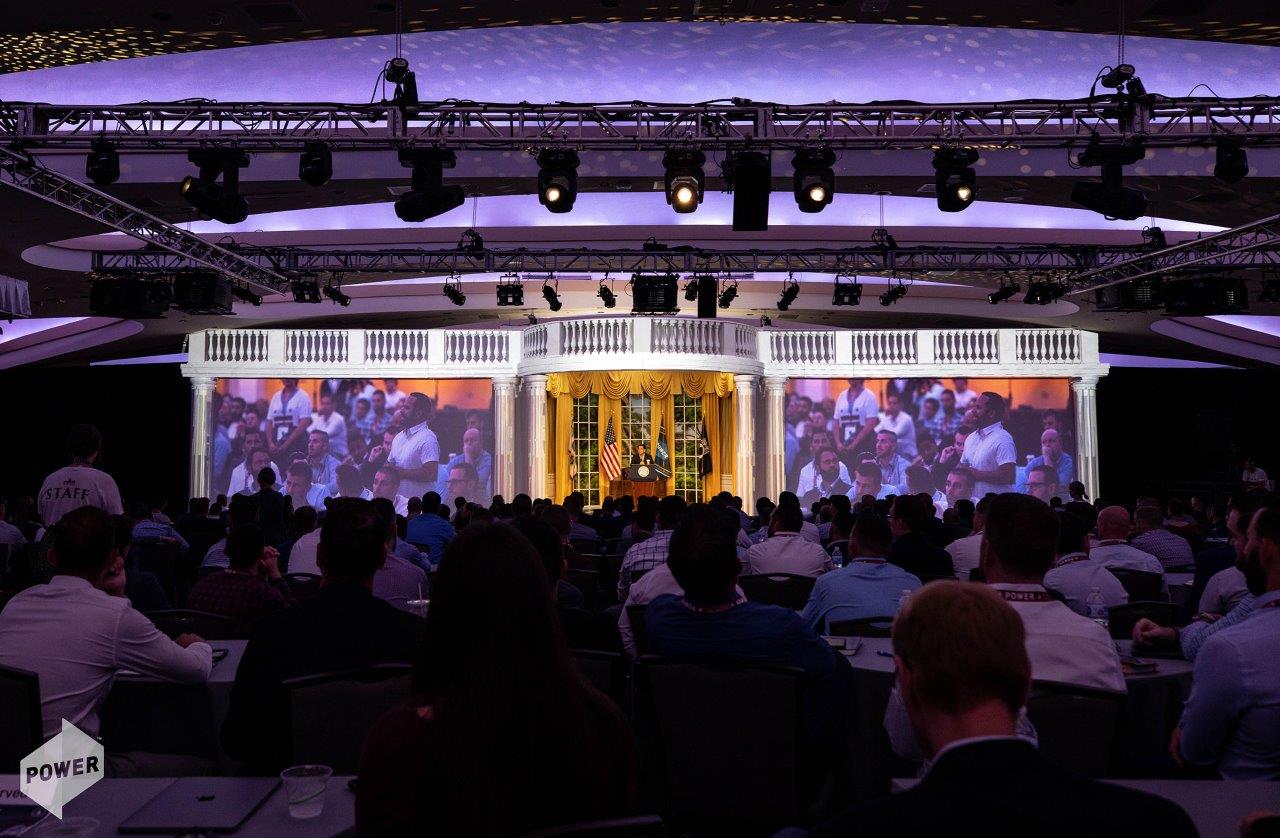 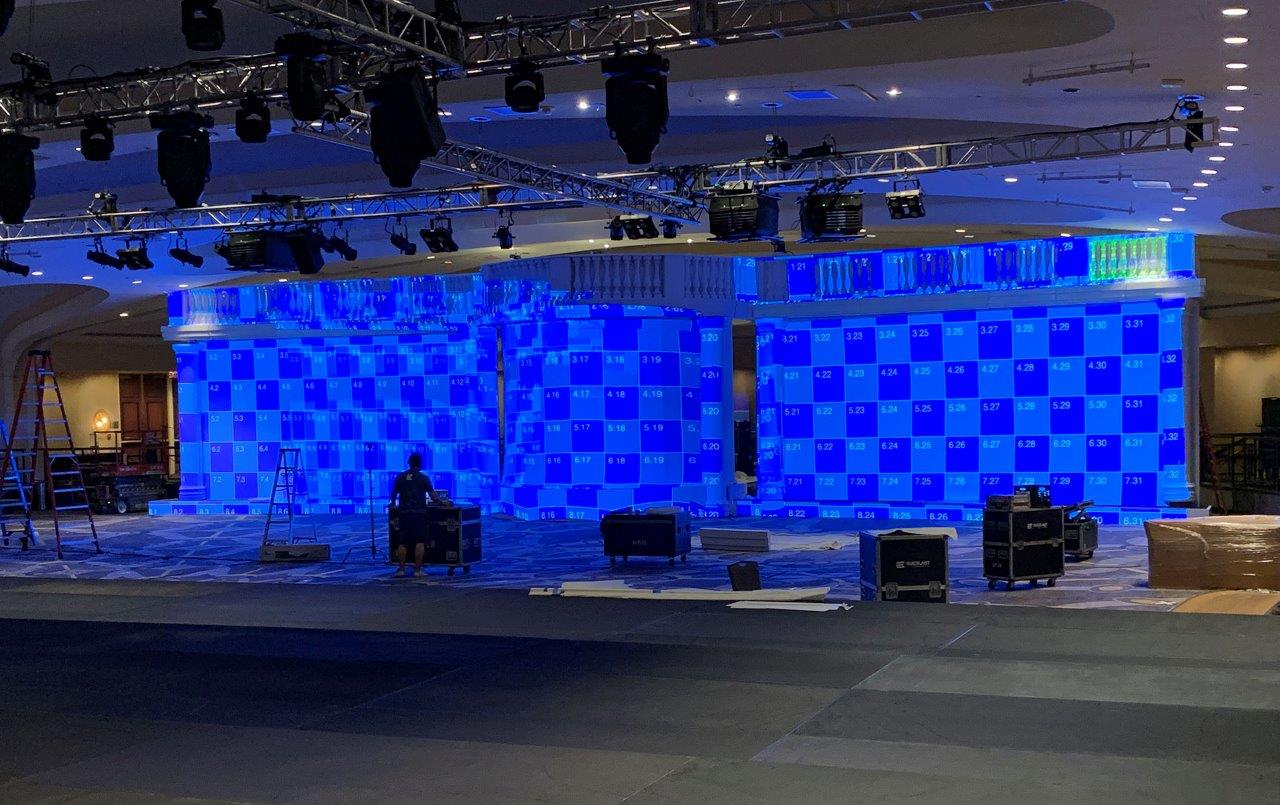 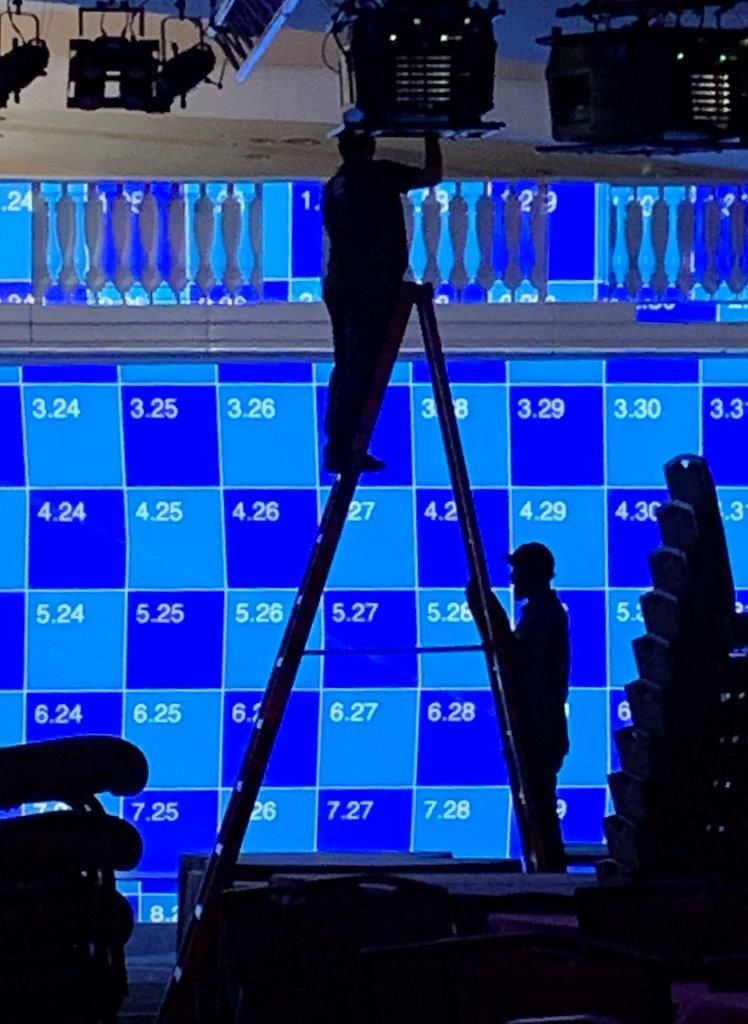 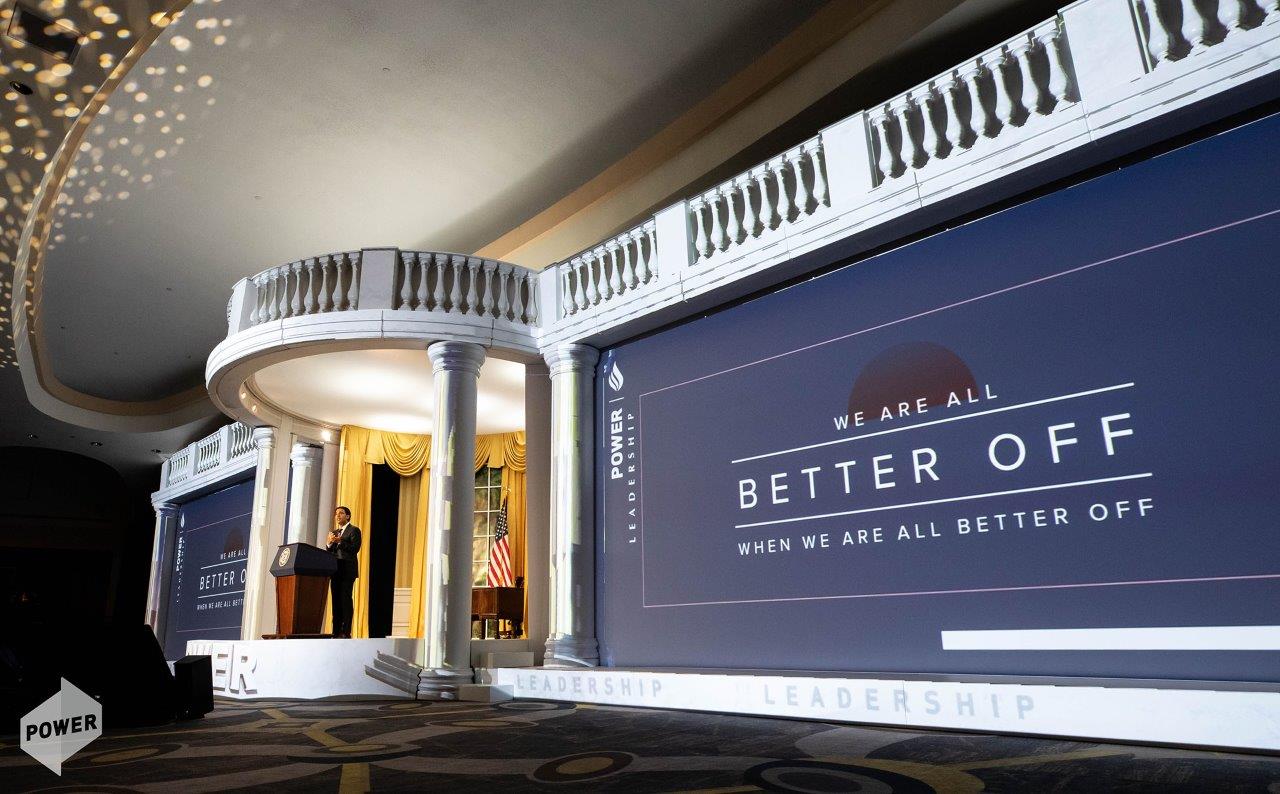 Pennsylvania Avenue is one of the ultimate special-event addresses in the US, but that unique venue tends to be booked up at least four years in advance. So the team at Everlast Productions, a leading Miami-area event-production company, did the next best thing for one its clients: they projection-mapped a remarkably detailed simulacrum of the presidential residence on a three-dimensional stage they constructed in the International Ballroom of the Washington, D.C. Hilton hotel for the annual leadership event of Power Home Remodeling Group, the largest, full-service, exterior home remodeler in the US.

When you’re mapping such a well-known architectural icon in the same city it exists in—and when one of the speakers at the event is a former American president—the rendition has to be as perfect as possible. Everlast Productions used an Avolites Ai Q3 media server as the mapping engine paired with a Tiger Touch II lighting control console and the manufacturer’s new Synergy software.

“This was a huge projection event—it had to be very detailed, and it had to be built literally overnight,” says Washington Arias, Everlast Productions’ CEO, referencing the large-scale mapping project in which multiple projectors had to apply projection to a three-dimensional set, right down to a credible Oval Office, where keynote speeches, presentations, and an interview with former president George W. Bush would take place.

The Ai Q3 media server was the source for all of the static projected content but also was used as a low-latency switcher, handling all kinds of static and motion NDI and HD-SDI feeds to accommodate interactive programming from Derivative’s TouchDesigner software, multiple cameras and various keynote presentations.

Washington notes that the trend in high-end event production now is to construct detailed physical sets whose verisimilitude can be further enhanced by highly detailed video projection. “Every end cap and baluster in the design of the set has to be perfectly matched in the video-mapping projection, which needs to be very detailed and precise,” he explains. “It can look fantastic but it’s much trickier and requires many more hours of preparation and execution.”

Everlast Productions’ Senior Video Engineer Scott Goldsmith says the ability of Avolites’ Synergy software to integrate lighting and video together between console and server was a significant help in mapping a complex stage. “The Tiger Touch II running on Synergy with the Ai server allowed us to minimise programming time,” he explains. “While Synergy is best known for its ability to pixel-map lights in a flash, in this event, Ai was being used as a production switcher and 3D mapping solution, and Synergy allowed for all sources, patches and presets to become available for playback on the console with minimal programming time.”

Scott says that productions are becoming more complex, but that there are still only 24 hours in a day. “It certainly isn’t easy to erect a 3D White House inside a ballroom, much less in under 24 hours, and then projection map it,” he says. “Ai’s mapping editor allowed us to effortlessly make adjustments to the set pieces and scenic elements virtually live as they were being fitted into this iconic venue. This kind of flexibility and the system’s minimal latency, especially when dealing with mixed inputs like NDI feeds out of TouchDesigner and HD-SDI from an Event Master Processor, are what made this a powerful combo a winner for this year’s Leadership Event.”