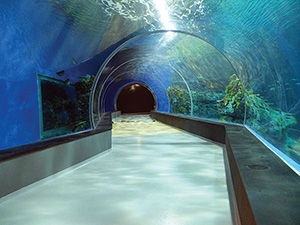 The big buzzword when it comes to AV integration in museum-type venues is “immersive.”

The idea is that, as patrons become younger, they’ll be tougher to impress. They’ll be so accustomed to looking down at digital content on their phone that they might not be impressed by the non-digital wonders of the world right in front of them.

So integrators set out to design immersive, interactive AV solutions that draw in young museum visitors and marrying the digital and analog experiences.

Usually, the solution is video-centric, but it’s not quite the case of the system Copenhagen, Denmark-based integration and consulting firm Stouenborg designed for The Blue Planet (in Danish, Den Blå Planet), the National Aquarium of Denmark.

“Normally, people are intending to create environments where images are the most driven part of the thing. Here in an aquarium the fish are the images,” says Anders Jørgensen, Stouenborg’s European project chief.

So yes, the system had to be immersive, but it needn’t take away from the stars of the show: the 20,000 fish and other ocean creatures on display.

One of the client’s goals was to employ advanced sound, video and lighting systems to augment the “live” viewing of marine life, giving the visitors a memorable educational experience by pulling them below the surface and dissolving the glass barrier between them and the aquatic life.

“You feel that you are underneath the water and you get the feeling that the fish are floating around you,” Jørgensen says. “If you stand still, you feel that everything is moving and that you are a fish in water.”

That sensation is largely accomplished through audio. The goals for the project were principally set by the exhibit design firm of Kvorning Design and Kommunikation, with sound design and audio system design by Stouenborg. An approach to audio systems was conceived that would seamlessly integrate dynamic soundscapes — each recorded and mixed for a specific exhibit area — with lighting and other visual effects, resulting in a multisensory experience.

“The whole idea was to use sound and take it beyond the two-dimensional experience of anaquarium,” Jørgensen explains. “We have [the opportunity to] enhance the sound system and get people to feel that they are underneath water and feel it rocking in their stomachs, feel like ships are going above you. When you [SCUBA] dive you don’t hear sounds so much as you feel the sounds through your bones, the vibrations through your body. So we try to recreate really long soundscapes and give you that experience and get that feeling that you are inside the water.”

At the heart of the AV systems is Meyer Sound’s D-Mitri digital audio platform, which manages all audio functions — multichannel playback, mixing and matrixing, digital signal processing and delay — as well as show control functions for lighting and video.

Stouenborg chose the D-Mitri system “because we were able to create soundscapes that could move and have different layers that can easily turn on and off,” Jørgensen says.

One audio option would have been to take an “audio guide” approach, he explains. That would likely include an audio tour via headphones worn by visitors. That, however, wouldn’t foster the type of collaborative learning experience that Stouenborg and its client are trying to foster, Jørgensen says.

They include the MM-4XP self-powered loudspeakers, UP-4XP 48 V loudspeakers and MM-10 subwoofers. “These loudspeakers are very efficient in terms of power draw, requiring perhaps half the current compared to an approach using multiple rack amplifiers and long loudspeaker cables,” says Jørgensen.

The audio systems are seamlessly integrated with video in several areas of the aquarium. In the foyer, specially edited footage from the BBC is delivered via Sanyo projectors, and a theater area adjacent to the main fish tank features a giant projection surface that can be lowed to show wide-screen HD content from a pair of edge-blended Sanyo projectors.

Automated show control for audio, video, and programmable lighting (employing a GrandMA2 desk) is orchestrated via the D-Mitri platform, while user instructions are inserted via a Creston DIN AP2 master controller linked to CNX-8 button panels. Live presentations in the theater are aided by a Sennheiser EW 572 wireless microphone system, with mixing and routing also accomplished by D-Mitri.

The project was challenging to say the least. Stouenborg began designing the system in 2006 and the very final stages are still being implemented at press time, according to Jørgensen.

“The actual implementation took about 7 months, but 11⁄2 of those were just spent on [automation] programming.”