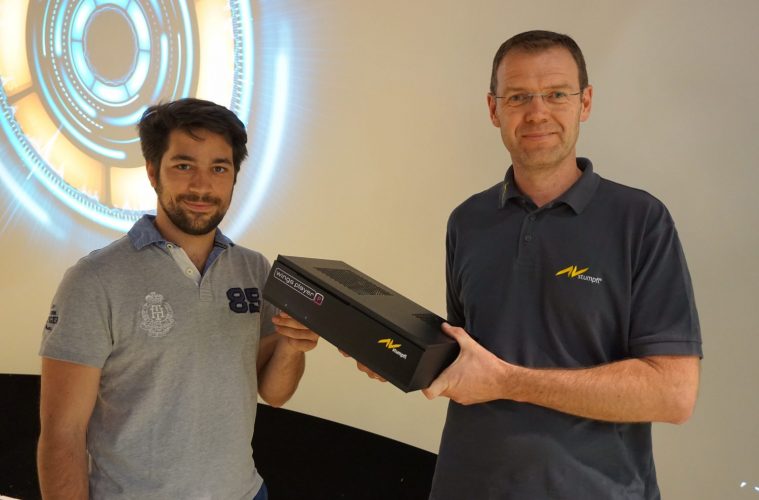 AV Stumpfl is introducing updates to its media server line-up. A new mini media server, dubbed the Wings Player, has been introduced. A new GPU-based video decoding algorithm is also set to roll out.

Wings Player is designed as a mini media server that boasts what AV Stumpfl calls some of the most advanced performance features of today’s high-end media servers.

AV Stumpfl says that as well as being the most powerful media player on the market today, Wings Player is housed in the most compact housing measuring 335mm x 90mm x 220mm.

“We’ve listened to feedback from our customers, project consultants and system integrators and have created the industry’s most powerful media player to date,” says Tobias Stumpfl, CEO at AV Stumpfl.

Wings Player performs full control and system monitoring functionality thanks to full Avio integration that’s available with a licence-based subscription. This means that the user gets what they pay for and can choose to include control over full lighting, multi-channel sound and effects as well as remote control, surveillance and interactivity.

Wings Player also supports various high quality video codecs with resolutions of up to 4K including H.265, ProRes 4:4:4, Animation Pro as well as the native playback of uncompressed Full HD content such as TIFF, TGA, DPX or PNG.

Wings Player handles an unlimited amount of layers whereby any kind of media can be arranged using the timeline based system. Up to four DisplayPort outputs are used as video outputs and an additional GUI monitor output. Audio can be mixed in a total of 24 audio channels. Even higher resolution uncompressed picture sequences can be imported and automatically converted into an intermediate video format.

Ensuring full system scalability, any number of Wings Players can be configured in clusters using synchronised video outputs. With Wings Vioso RX software it is possible to have multiple independent timelines running either on a local Wings Player or within a cluster.

AV Stumpfl has been developing a new solution for video playback in the entire lineup of video servers and players. In the past, decoding of compressed video contents has been done in the CPU of a media server and the decoded data was transferred via the PCI bus to the GPU for playout.

The current Wings Vioso platform has no content limitations, even if they exceed the maximum texture dimensions of the GPU, but the new compression technology is the company’s solution to fill the gap between uncompressed and regular video compression algorithms.

Tobias adds: “GPU decoding will enable users to have the most advanced multi-display software available in the market today. Our developers have pushed even further to improve the performance of Wings Vioso RX.”