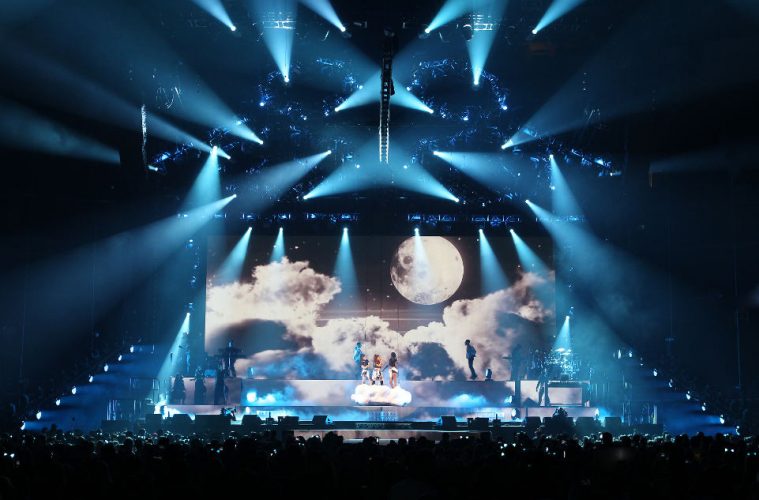 The 88-date worldwide tour includes venues in both north and South America, Europe and Asia. A.C.T Lighting, Inc. is the exclusive distributor of Clay Paky and MA Lighting products in North America.

Chris, who is also lighting designer for Phish and Justin Bieber, designed the touring rig for the North American and European legs of the tour as well as lighting for individual shows in Asia and South America. VER supplied the fixtures for the touring rig.

Prior to the start of the tour Chris sat down with the singer to discuss the feel of the show. “She really likes the look of diamonds,” he reflects.

“So we decided collectively to make the thrust diamond shaped; 80% of the rig is diamond-shaped pods with smaller diamond pods inside them, hanging lower so they look like chandeliers. The Clay Paky B-EYEs are the perfect light to make the twinkling, sparkly effects she really likes, to continue with the ‘diamond’ vibe.”

When Chris used B-EYE K20s in his lighting design for the Doritos Stage at SXSW in 2014, he invited Ariana’s management to see the stage design and the fixtures’ effects programming. “I said I wanted to use the B-EYEs as an effect light for her tour and they thought she’d love it,” he recalls. Kuroda specified 88 of them for the touring rig.

“We run them in 169-channel mode and write our own effects for every pixel,” he explains. “That’s the most complicated mode we could use. They are fantastic fixtures that work great on the tour. We use their kaleidoscope, zoom – and custom program every pixel effect you can think of.”

More than three-quarters of the show utilises B-EYE lighting effects.

When the fixtures are not filling an effect role, they’re “doing double duty as a wash light,” Chris notes. “It’s a big light when all the pixels are on, so we turn off the outer ring of pixels to make it a more elegant wash. It’s great that the B-EYEs are so versatile that we can go back and forth between the options.”

“I had specked Stormys for the touring rig, but we weren’t able to make it happen,” Chris says. “We finally got to use them in Manila, and they were fantastic. Stormys look like a traditional strobe, not a block of LED lights. We also used our LED Strobes as a wash light from time to time. They have a nice wide, even field of light, which was good for lighting the dancers around Ariana from the sides. They gave us just the right visual environment we wanted.”

Chris spent about one month previsualising the show in MA 3D. “I only use MA 3D,” he emphasises. “It’s designed to work with the grandMA2 in ways that complement the console. They have a symbiotic relationship.”

The lighting designer took his own full-size grandMA2 on the tour; a second system joined it as a back up. “I’m a firm believer in grandMA or nothing!” he declares. “Bob Gordon introduced me to grandMA about 12 years ago, made me sit and play with it, and I’ve been on grandMA ever since. I converted to grandMA2 in 2010.”

He found the console’s Layout Views an invaluable feature in building the B-EYE effects quickly and efficiently. “We could punch the screen and select each pixel we wanted,” he says. “It was incredibly handy and something no other console offers that I’m aware of. Without Layout Views it would have taken us three months instead of one month to accomplish these complex and difficult programming tasks.”

Why Do You Have To Go And Make Things So Complicated? – Kylie Minogue

No Change Of Kanye Throwing A Strop About The Lighting Here…

Lighting Katy Perry At The Superbowl: How They Did It