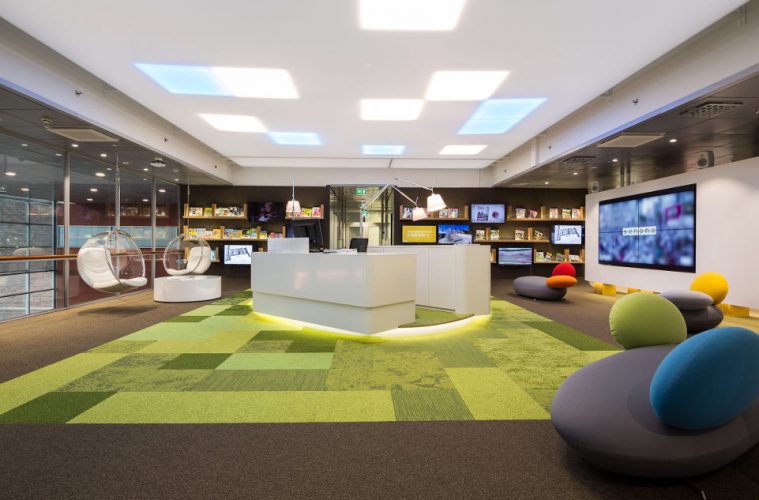 4Business’ broad range of integration and project management experience led Sanoma – a leading consumer media company in Finland and the Netherlands – to contact the team for its latest project.

Through a broad range of services across a range of media platforms, which include online, print, radio and television, Sanoma serves multiple channels in the entertainment and learning sectors.

Based in Helsinki, the company has recently acquired a new building in the city. The new location brings together separate parts of the business into one state-of-the-art location.

The project involved a substantial refurbishment and complete refit of all fixtures and fittings, as well as a new interior design scheme.

In Finland, the company has undergone a transformation in its operations and the new headquarters is a reflection of this.

With communication in its widest sense being an important part of the business, the company wanted to make sure that its new audio visual installation fitted in with its needs both now and in the future. 4Business was chosen to transform this vision into reality.

“We were really excited to take on the Sanoma project but at the same time, we were also aware that there would be some substantial project management challenges involved,” Tuomas admits. “The company was relocating from two buildings into this one new property and we were working to a tight timescale. This meant we had to make sure that everything went smoothly because as soon as the workforce moved in, the audio visual system would need to be up and running without delay.”

However Tuomas found that coming from a background in residential gave the team an edge.

“We can use our knowledge from very complex residential projects to transfer to really straight forward commercial projects,” he says.

“Our biggest benefit is the knowledge we have of complex systems and the knowledge from IT and the IoT side of things. These days, companies like us have to know more and more about IT, AV, electrical engineering and automation. Security and room booking systems are also an area that we need to be aware of. AV companies have to change their strategy a lot if they want stay competitive.”

4Business has worked with Sanoma before, but this project was sealed after winning the contract proposal against one of the biggest AV companies in Finland.

The first task of the installation was to get all the cabling into the 70 rooms which included a mixture of conference and meeting rooms.

There are ports for a wide range of AV inputs and outputs as well as retractable cables for connecting a wide range of devices. The larger meeting rooms have been designed as large presentation spaces and there are smaller rooms for video conferencing and other collaborative work tasks.

Genelec loudspeakers were installed in 70 rooms throughout the building.

This includes the open plan reception area, which features a pair of Genelec 4030B loudspeakers to complement the large format display that provides rolling news and company content for visitors and staff. The area was also used for a cocktail party held to celebrate the opening of the building.

Pairs of Genelec 4030Bs are also used in the larger conference spaces alongside flat panels displays. 4030B is an extremely compact two-way active loudspeaker designed for fixed installations.

In some of the smaller video conferencing rooms the 4020Bs are mounted in pairs on either side of the display on specially designed, custom mounts. In total, 80 of these speakers were installed.

“We have been really pleased with the performance of the 4030Bs in the larger presentation rooms,” says Tuomas. “The sound quality is perfect for the corporate environment and even at high volumes the clarity is maintained. In the smaller rooms, the compact 4020Bs have also performed extremely well and the client is delighted with the results.”

The most challenging aspect of the project was the control system, says Tuomas. “The customer wanted to have the most easy to use system, with everything from AV, to lighting integrated, and the way to use it had to be the same in every room. However, it is so easy to use – and reliable. The customer is really pleased with the results and it has been particularly praised for its use in the conference rooms.

“The client is impressed with the reliability and the neatness of the install,” he continues. “Everything has to be perfect with us. Our installers are really professional and everything works with one touch of a button. That is our business card to our customers.”