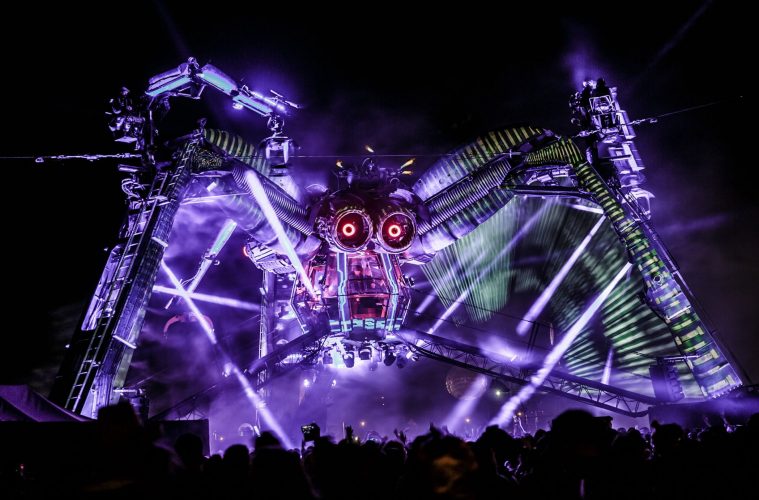 CPL (Central Presentations Ltd) enjoyed another successful experience the world’s most famous music and arts festival, Glastonbury. Supplying projection to Arcadia’s giant recycled metal spider, which hosted the impressive ‘Metamorphosis’ show, the installation was once again one of the most impressive bits of AV on show at the event.

The west Midlands based rental specialist also supplied a lighting and rigging package which was utilised across the lively Shangri-La late night area – which this year saw the Truth main stage emerge from the embers of the previous Hell, and the site expanding its daytime activities via the Shangri-La International Television Centre (SHITV) transmitting debates and discourse on DIY culture and a range of other topics.

A third area of the festival for CPL was delivering projection to the movie theatre at Williams Green, working with The Live Firm which screened Supersonic, a British music documentary directed by Mat Whitecross detailing the formative years of Oasis and the height of their success in the 1990s.

CPL’s Richard Burrow was on site to oversee operations and collaborate with the various technical crews involved in running these different areas on the creative edge of the festival.

The current projection system for Arcadia’s spider was originally designed by CPL for the launch of the ‘Metamorphosis’ sequence first shown in 2015 comprising six Panasonic PT-DZ 21K projectors, each beaming onto the front and back of each of the three spider legs.

Motion graphics – created by Tom Wall from blinkinlab is mapped precisely on to the legs using a media server and the Metamorphosis show cues are all triggered by time code generated by the overall show control system.

The projectors were positioned in weather-proof hides on six platforms placed around the Arcadia arena, approximately 40 metres away from the 12-metre high spider structure which is constructed from industrial waste, so they had a serious throw distance.

CPL used six Connex two-way fibre DVI/RJ45 fibre optic converter transmission systems which enabled both the data carrying the content to the machines and the projector control signals including on/off, colour settings, contrast, geometry control and other monitoring and feedback related to projector health, to run down the same cable.

This is a neat, robust solution designed for live events that saves time and reduces the need for unnecessary and unwieldy cabling.

Metamorphosis has been one of the most popular Glastonbury attractions since it launched two years ago and this year pulled record audiences of around 50,000 to witness the high energy narrative and see the forces of good and evil battle, complete with new age abductions, space age teleportation, dramatic transformations and general craziness.

The show started at 11 p.m. and delivered 30 minutes of imaginative ‘shock & awe’, followed by a DJ line up for the Friday, Saturday and Sunday of the event.

CPL also renewed its long standing relationship with PF Events for the supply of kit to this eye-popping visual area with a skyline dominated by huge towers of trash and a reformed gas tower overlooking the fields of ‘digital revolution’ including a 360° activist AV installation.

“It was great to see all of this used inventively on the Truth Stage and around the various eclectic Shangri-La areas which are also inventive and interesting to watch or experience,” comments Richard.

Richard concludes: “It is always fantastic to be involved in Glastonbury and to see the ingenuity, passion and creative technology that go into creating incredible environments and some amazing entertainment. With the festival taking a break in 2018, everyone was making an extra special effort and upping the ante in their production values to ensure everyone would have a memorable and long-lasting time catching the excellent vibes and enduring spirit of the occasion.”